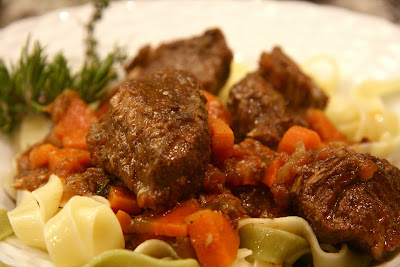 I have been making recipes from Cooking Light for more than 20 years. In fact before Cooking Light was a magazine it was a featured section of Southern Living Magazine, and I have some "Cooking Light" recipes that I tore out of Southern Living's pages. I don't subscribe to the magazine but I pick up an occasional issue in the grocery store. In the Fall of 2007 I came home with the 20th Anniversary issue of the magazine, which has turned out to be a veritable treasure-trove and has earned a permanent place on my cookbook shelves. (I've previously posted the Creamed Corn with Bacon and Leeks and the Penne with Vodka Cream Sauce, both from this issue. Edit: also Pasta with Prosciutto and Parmesan and Halibut with Bacon and Mushrooms) Another recipe in the issue that caught my eye was for Provencal Beef Daube, which was tagged as the "Best Beef Dish" in the magazine's history:

"It stands above all our other beef recipes because it offers the homey comfort and convenience of pot roast yet is versatile and sophisticated enough for entertaining."

Given this endorsement, I just had to try the dish for dinner guests. 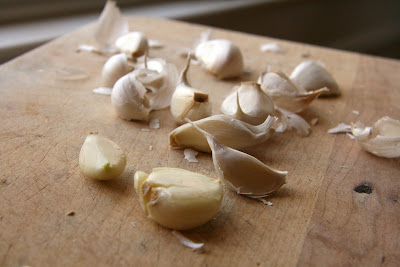 n.o.e.'s notes: I cut my own cubes from a wonderful beef chuck roast that I ordered through my farm box people. 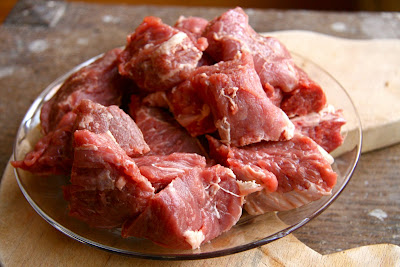 The roast was a tiny bit short of the specified 2 pounds, so I increased the carrots a little. As it turned out, the proportion was off - it really needed the full quantity of the meat and fewer carrots than I used. I browned the beef in two batches (in a 3 qt dutch oven, so the meat would brown rather than steam. This was the first time I used my new Lodge enameled cast iron - love the way it cooks. After starting the stew on the stove top, it finishes with 2 1/2 hours in the oven. 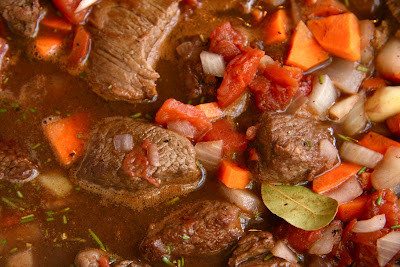 Ready to do time in the oven.

the verdict: I ladled the daube over buttered plain and spinach noodles. Although the recipe claims to yield 6 servings, we had just enough for 4 people. We really enjoyed this recipe (aside from wishing that I'd make it with the proper proportions of beef and carrots). All the flavors has mellowed richly during their long slow time in the over. It's as good as my go-to beef stew recipe, and more company-ready. Because it bakes in the oven rather than simmers on the stovetop, it needs less attention, leaving me do other things to prepare for company. Although it is a Cooking Light recipe, it is substantial and hearty - perfect for warming up on a gray, chilly day. 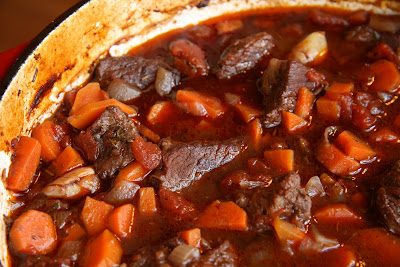 This is really a nice dish to remeber ! We are finally enjoing a few days of nice tramontana (a north wind that clears up the sky and gives us a wonderful Roma)but I'm afraid rain will come back soon and we'll need some comfort food !!

I love stews, and this one looks wonderful! It's interesting about the beef to carrot proportions, because I tend to think of stews as being so flexible, and now I wonder what I've been missing...
Audrey

That issue is one of my favorites too. It has so many great recipes. This actually looks very appealing. Maybe it is because you mentioned that you used meat from your farm box. That is just so cool to me.
I also had to laugh about your date to Sonic! What a great V-day!

Looks so hearty and delicious! I wish I lived someplace where I could get a box delivered... what fun!

Nothing like a nice beef stew to warm you up!
I envy you your farm box.. no programs like that here, sigh.

This looks great! Love how it is slow cooker friendly, too. I also find it surprising that you noticed the discrepancy in beef/carrot proportions, so I will be sure to watch out for that. I've subscribed to CL on and off for years, and also have several of the annual recipes cookbooks, but it sounds like the 20th anniversary compilation is a must-have!

Have some awards for you if you want to stop by my blog and pick them up! You are the best!

Oh, and the stew looks wonderful.

I agree that stews are pretty loose that way - a little more of this, a little less of that - but this daube seems to be more a beef dish accented by carrots. Stews usually have potatoes, mushrooms, etc. (lots of stuff going on so you might not notice how much or how little beef there is). The way I made this dish, it just looked like LOTS of carrots. I had to be careful when I served it that there was enough meat on the plates.
Nancy

Your banner pic never fails to charm afresh. :) (I've a black Lab pup now.)
And your food looks so homey and delicious it just makes me run to the kitchen to cook something from scratch.

I love Cooking Light! What a comforting and healthy meal!

I am a huge Cooking Light fan, and this looks fantastic!

I wish I had farm box people. And some of that stew.

Like your blog and Cooking Light! I've done that beef and it is excellent.
I'd be happy to send you a copy of the bread recipe from the cook book if you'll e-mail me (commentsmykitchenatmacdotcom) I have been trying some breads with fresh yeast lately - my dad always swears it's better - but I do enjoy mixing the instant with the flour and not messing with the proofing;) maybe that makes me lazy.

This looks absolutely delicious - I love these stew-type dishes.