There is a chicken thigh under all that wonderful sauce and garnish!

Over breakfast on Sunday, my husband reads the newspaper. Last week he paused in his perusal of the Times Magazine to share with me the featured recipe for Country Captain, a chicken dish. (The whole article accompanying the recipe is well written and well worth a read.) "Why don't we make this tonight?" Jim asked. And so we did.

I have heard of Country Captain, and frequently paged past recipes for the dish in many of my (regional) cookbooks. But it took the New York Times to make me pay attention to this quintessential Southern dish. 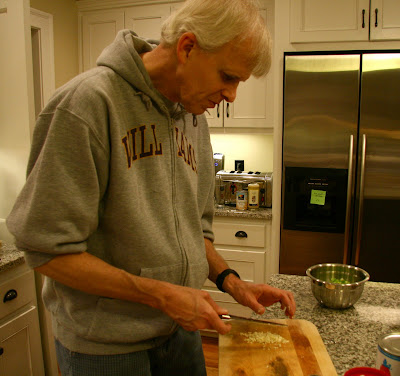 Cooking this recipe on a Sunday afternoon was a return to a practice we'd let fall by the wayside. About 15 years ago, my husband and I had a habit of cooking Sunday dinners together. Those afternoons of chopping and sauteing, along with weekly breakfasts at our local coffee shop, were valuable opportunities to stay in touch with each other amid the whirl of carpool, scouting, dance classes, work, and the million other distractions of a busy household. As a bonus, we developed a small but mighty arsenal of delicious recipes (with the Times frequently playing a contributing role).

Last week I realized anew what a wonderful job Jim does of chopping vegetables (and he remembered how relaxing he finds that to be). The recipe, while not a difficult one, takes some time to prepare. Working together didn't cut the prep time in half, really, but it more than doubled the fun of cooking. One of the perks of cooking with this man is that he cleans as he goes (whereas I, ahem, do not) and we end up with a cooked dinner and a clean kitchen to boot! 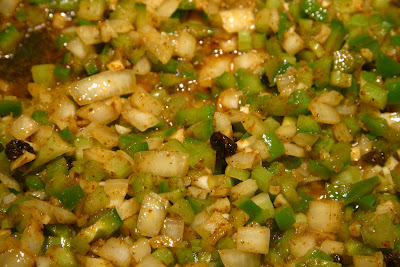 - I used around 3.5 lb chicken thighs with bone in and skin on, although I couldn't help myself from trimming some overhanging skin/fat from the thighs.

- When I ran out of dried thyme (seriously, how does one even do that?) I rounded out the teaspoon with Italian seasoning. 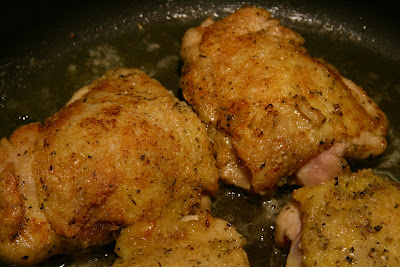 - Instead of cooking the bacon and then crumbling it, we cut 4 slices of bacon (Benton's) into lardons before cooking it to crispness. We poured off half the bacon grease (although the recipe contemplates using it all) before adding the vegetables.

- We used curry paste (Patak's hot curry paste which I have ordered online if I can't find it in the store) instead of curry powder. I love this stuff!

- The medium onion weighed around 200 grams (for future reference).

- We used diced san marzano tomatoes (rather than the chopped tomatoes the recipe specifies). 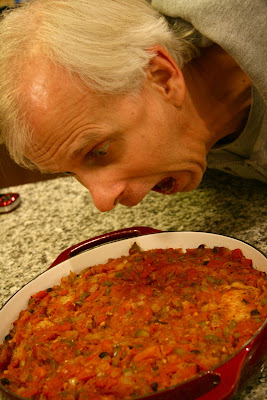 The chicken, just out of the oven and ready to be scarfed, er, served
the verdict

In the words of my husband:

"This recipe caught my eye in NYT mag over bagel and coffee this a.m. because it listed diced onions, celery and bell peppers - the Holy Trinity where I come from (land of Galatoires) - and minced garlic - the Pope. Also chicken thighs and bacon (which for us means only one thing, Benton's from Tennessee). Served over rice. First taste: The name 'Country Captain' is a shameful travesty. Instant field commission to 'InterGalactic Field Marshal'."

From what I can tell, this is probably my husband's new favorite chicken recipe. As for me: I'd put it on the top rung, at least. It's really delicious. The rice really worked to complement the flavors in this dish. The currants, bacon, and almonds were great additions, although we didn't need all of the bacon. Benton's is a very intense smoky bacon, and we only needed to sprinkle on a little bit or we'd have run the risk of the bacon overpowering the chicken and sauce. In the future, 3 slices would be fine. 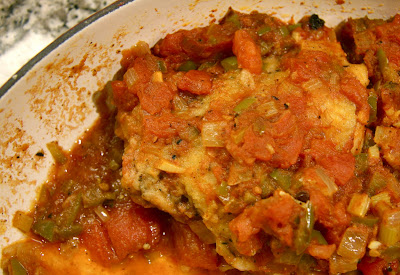 Ciao Nancy ! I read your post with joy, it must have been great to cook with your husband again ! Mine isn't that good (I hope he doesn't read this ) mostly because his italian mother never even imagined a man could cook !! But he's good with the clean up though .. This chicken really is something I have problems with peppers but it would be good to share with friends !!!

I always enjoy hearing your hubby's food commentary -- it's so much more illuminating than the usual "wow, this is really good!" This chicken sounds wonderful -- great medley of flavors! I will keep my eye out for the Holy Trinity when we are in the land of Galatoire's in a few weeks (hopefully at Galatoire's, in fact)

I love cooking with my hubby! It is the best! It goes much faster and we enjoy the process so much more!! Josh will want to try this one for sure!

Wow. that looks so fabulous and tons of ingredients. I'm a seven ingredient kind of girl myself. I also like cooking with my husband. He is a great help to me sometimes. He doesn't cook, but he is a good assistant. I wish I could taste your chicken!! Oh my, the word verification for me is "pucks." How weird.

I'm with your husband--anything with onions, celery, bell peppers and bacon perks up my ears!

This looks so flavorful and delicious!! I have never heard of Country Captain. I find chopping veggies relaxing, too!

So great that you can cook together! The chicken sounds divine!

What a great post. How cool that he cleans as he goes and is a great chopper. I love his new name for the dish.

I'm so glad you made this! I was eyeing the recipe. Now I know how good it is! I'll have to make it and let you know how ours turned out.

...and I've seen recipes for this in MY regional cookbooks, and always kinda wondered what it was like. It looks wonderful! After years, decades of being a white meat only girl, I've recently discovered the joys of chicken thighs, especially in saucy, stewy kinds of dishes. So I would definitely enjoy this. And it's nice to meet your husband! We've read his great comments, and always kinda wondered what he was like!

Great photo of the hubby ready to dig in! Good lookin' dish.