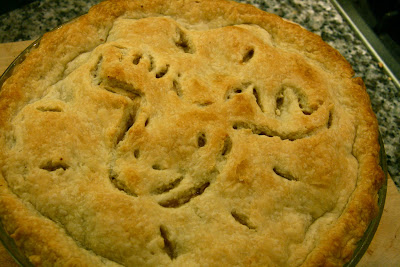 This is the pie that my mother cooked every day while her 4 little angels were napping. We'd wake up from our nap to enjoy fresh cinnamon pinwheels that she made with the scraps of crust.

The pie is great any time of year, and is one of the staples of our Thanksgiving table. Usually, it's J.D.E. who makes the apple pie (and A.L.E. bakes the pumpkin one), but this year J.D.E. was several thousand miles away, so A.L.E. baked both, in addition to helping with the Twofer pie. I made a chocolate pecan pie. Whew, lotsa pies!

6 cups sliced, cored pared tart apples (about 2 pounds)
¾ c. sugar
1+ T. flour
½ tsp cinnamon
¼ tsp. nutmeg
J.D.E. puts in a pinch of mace
¼ tsp salt
2 T butter – to dot the filling before putting the top crust on. I always forget this and have to stick it through the holes in the crust.

1. You mix up all the ingred.s and dump in bottom crust, dot with butter, and put on top crust.

This time we pre-cooked the apple filling on the stovetop for about 5 minutes so it would already have compacted before we put the top crust on. For this, it's a good idea to throw some more apple in.

Unfortunately, I pulled the pie out of the oven too early. It looked great but hadn't thickened and the apples were a bit too firm for my taste. But my husband loved it, and since it's his favorite, it all worked out. I spent my pie time eating pumpkin! 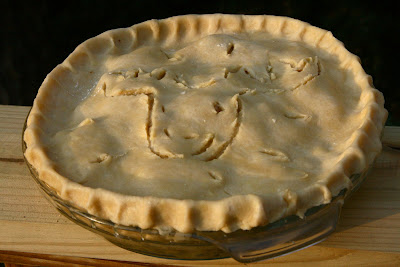 I love the moose! =) Apple pie is my favorite, but I make it with crumbs on top instead of crust. I have pictures of the pie I made for Thanksgiving, but haven't had time to blog about it yet.

Do you need another grandchild to the family? I would love a moose apple pie.

Apple pie is my favorite, hands down. I am amazed that your mother made this every day and that you had fresh cinnamon pinwheels waiting for you when you woke up from nap. My kids just do not get that kind of post-nap treatment. I think the moose makes it!

And I am SO sorry to hear about the cheesecake!! So your pan flooded? Now that you mention it, springform pans are not exactly watertight, so I can see how this could be a problem. Yet I don't remember Dorie discussing this in the book. That is so frustrating (and cheesecake somehow seems like one of the more expensive recipes -- doubly annoying). Are you going to make it again? I haven't made it yet -- I plan to serve it on Christmas, and I was going to wait for my sister to get into town the week of Christmas so I could bake it with her, but I might do it ahead of time and freeze it if I see a window of opportunity. Odds are I'll need a do-over or two, so I might as well start early. I made the sugar cookies today, and this string of cookies that we're in the middle of has kind of lulled me into feeling marginally competent, and that's usually when my worst kitchen disasters strike. I'll definitely try to benefit from all of you cheesecake trailblazers and study the P&Q before attempting this!

Your mother made it every day! Wow. You know my mom always had dessert at every meal too. Seems like we have gotten away from that tradition to try and live healthier I suppose. That apple pie looks darn good to me! Sorry about the cheesecake. That is something that I make for my family, but I have never liked it. I have a great recipe for an easy one though.
Thanks for all the gift ideas. You really have a great Christmas wish list there for yourself. I can never think of things I want. I did ask for eight ramekins so that I could make individual pot pies for guests. Do you really use your scale that much?
I'm home sick today with bronchitis and a fever. Didn't even have a cold last winter and this is really putting me behind on my Christmas schedule. Maybe God was telling me I needed a rest. I won't be making cookies today for TWD though. :(

Hey, the apple pie still looks great! And thanks for the cheesecake rundown. While I could see how lining the pan with foil is essential for avoiding a waterlogged cheesecake, I would think that the foil would make it harder to remove the cake from the pan, as you experienced. It sort of defeats the purpose of having fancy nonstick coatings on our springform pans. Whenever I make this, I am positive that I am going to need a little extra nog in my eggnog, if you know what I mean. Have a great trip!

Foil goes on the outside of the pan . . . got it - thanks! There is no way that this cheesecake ends well for me.

The moose is precious. I'd eat all around him and save that part for last.

Apple pie just MIGHT be my favorite pie, it's really hard to decide, but how cool is the moose! I always make a little apple with some dough, so people will know what kind of pie it is. I do the same with cherry, with some little cherries made of dough, etc. Now I'm getting in the pie mood again. Better work a little harder to work off some of the Thanksgiving pie before Christmas gets here!