Greetings from Germanland! This is younger daughter here, j.d.e., with a guest post.

I am spending the year in Berlin, taking classes at the Freie Universität Berlin, and since it’s close to Christmas, my Portuguese class is having a giant breakfast before we get out for break. When my professor first suggested the idea of brunch during class, I immediately thought: “SCONES!” Actually, I said it out loud. Twelve or thirteen confused faces turned my way.

It turns out that apparently no German students have any idea what scones are, so I got a lot of blank stares. But out of the darkness came a bright light… "Yesssss!” I heard (in German, of course, so this was more like “Jaaaaaaaa!”) from the front of the room. Now everyone was staring at Maria João. We spent the next five minutes or so doing a tag-team explanation of what scones are. (All we really said, however, was, "They're bread, kind of, but not really. But kind of.")

Yes, my Portuguese professor loves scones. I like scones, but I haven’t had them in a while, so maybe that’s why I yelled out “SCONES!”.—my subconscious wants me to know that it just can’t get enough of English breakfast food. So scones it is. My subconscious also really likes making me say "Stone of Scone" in a cheesy Scottish accent (not to mention making me talk to my roommate's cat in a Russian gangster voice), so I was kind of taking a big chance here, trusting my subconscious and everything.

My mom is visiting me in Berlin, so I thought that it would be fun to bake these bad boys, as we say in my family, with her. Maria João requested that I leave out raisins, which I am happy to comply with, so I decided on two kinds of scones, one savory and one sweet. The former is a recipe from Farmgirl Fare, one of the many food blogs I stalk, and the other is from that bastion of culinary steadfastness, Epicurious.

So I present to you:
Klara
The dog that eats the crumbs around my apartment. Look at those eyes. How could you not give her crumbs? 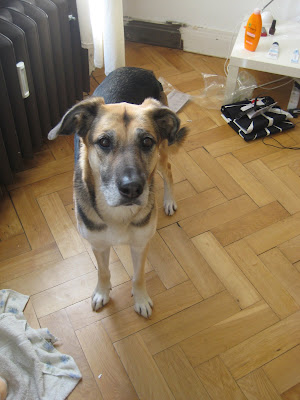 Lemon Cream Scones
Instead of dried apricots, I put in candied ginger. Apricots, Schmapricots--Ginger wins out any day for me. The oven temperature was a bit awry, so these cooked a lot faster than we expected and didn't really get a chance to fluff up.
As a kid, I was always in charge of mixing together the dry ingredients. This time was no different. I guess the dry ingredients are kind of boring to look at, but my mom was so amused at the tiny spoon I had grabbed to mix with that we had to take a picture. 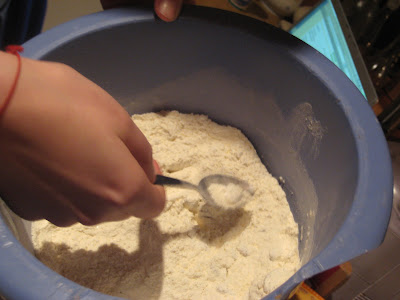 There, that's a bit more interesting, isn't it? All ready to cut into slices and bake. 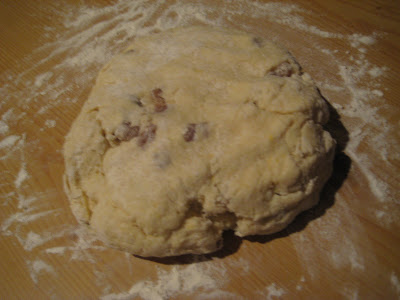 The finished product...plus my messy kitchen in the background. I'm a student though, so I cut myself some slack as far as cleaning up goes. 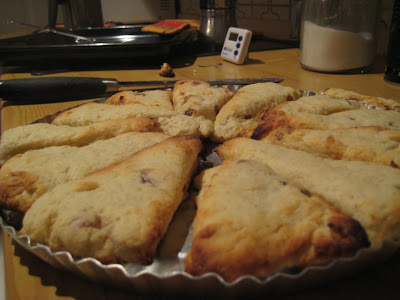 Cheese and Scallion Scones
I ended up having to use the full three cups of flour on these, but they ended up having the best, fluffiest texture! The dough, however, smelled like old feet, which had me worried until they came out of the oven, looking and tasting perfect.
Due to the scallions, these dry ingredients were a bit more interesting to look at. Since I know that we all bake for looks, don't we? (This couldn't be any further from the truth for me, actually. I'm about as rustic as it gets in terms of presentation.) 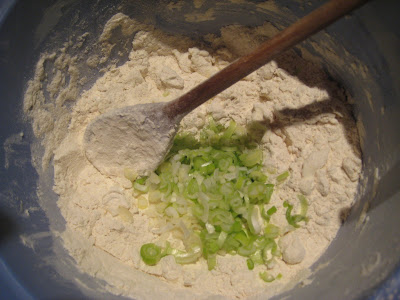 [This is Nancy, just breaking in for a minute to say that we subbed goat cheese for the feta in these yummy scones.]

Here are the scones right out of the oven. They look kind of like small forest animals, gathering together in some sort of clan formation (which makes sense because scones are Scottish). 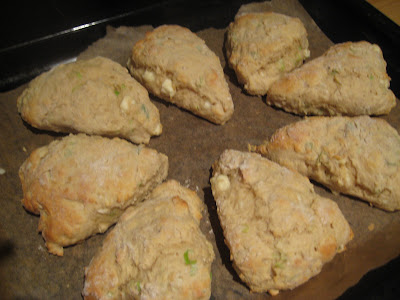 The Verdict:
GUILTY!
...oh, wrong case. Both recipes delivered strong results, I'd say. I wish there were more lemon flavor in the sweet scones. And although the savory dough definitely smelled like foot odor,* I'd make them again in a heartbeat. My fellow students loved both kinds, and actually clamored to take home the leftovers. I gave a lot of them to Maria João, though, because I know which side my bread [scone] is buttered on, and the end of the semester is approaching... 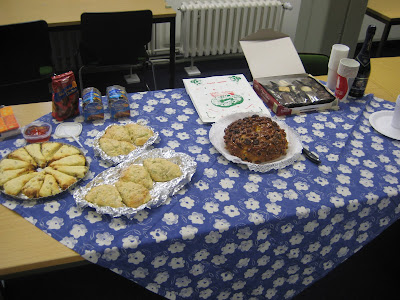 ___
* If you search "foot odor" on YouTube, you get some pretty great results. Including a video of a band of shady looking youths playing guitar in the church hall of some Portuguese speaking land. Perhaps I can get some extra credit.
Posted by Nancy/n.o.e at 12:00 AM

Ciao ! I'm glad you managed to cook all together in Germany too !....And I never had scones so I'd better try them !Maybe for Christmas breakfast ?? All the best to all of you , including sweet Klara of course !! (I had made a spelling mistake !)

Gosh, J.D.E. So much going on here, I'll have to keep myself in check so as to not write you an annoyingly long comment (which as your mom can tell you, I have a tendency to do). Can you imagine the hits that your mother's blog will be getting with all of the people googling "scones" and "old feet" right here before the holidays? Actually, your post could not have come at a better time, because I've finally starting thinking about what to make for Christmas morning breakfast, and I was thinking something scone-ish (but I just thought it, didn't say it out loud). And actually, if I present the scones to my children as "small forest animals gathered in a clan formation" they might even eat them! I think I saw something like that in Family Fun magazine once.