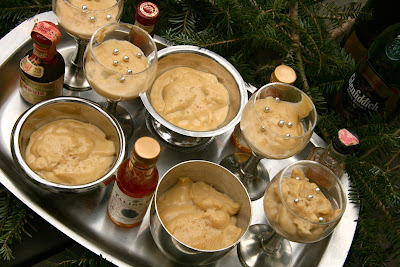 Hello, both a.l.e. and j.d.e. here, taking over the Tuesdays With Dorie post because our mom was busy grappling with our Christmas tree.

When our mom approached us individually about cooking one of the Tuesdays With Dorie recipes together, we both separately picked this one. Fate! I [j.d.e.] am a notorious fan of butter, and my sister is a notorious fan of scotch, so this post is, one could say, the perfect mix. 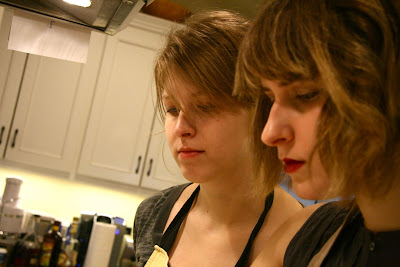 a.l.e and j.d.e., keeping a watchful eye on the simmering scotch

While j. and Mom fiddled around with various ingredients, I (a.l.e.) got down to the very serious business of ascertaining the most optimal Scotch for the occasion. Cautionary tales of boozy grown-ups-only-style puddings ringing in my head, I began the taste testing. Now, we have a pretty prodigious liquor cabinet going, and that is especially true in terms of Scotch Whisky: 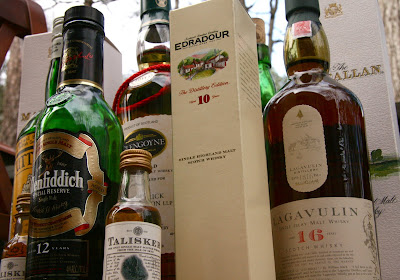 After DQing several (including the 3 unopened bottles) - Laphroaig was way too smoky, Edradour was too wonderful to use up in a pudding, Tallisker made me go "Phroooowargh" - it was down to the Macallan 12 yo and the Glenfiddich Special Reserve 12yo. The latter took the prize. A word to the wise: it would probably be best to aim for a mellow single malt rather than the strong variety as suggested by the recipe. Even a blend would work - Cutty Sark and J&B were close runners up in butterscotchy flavor potential. 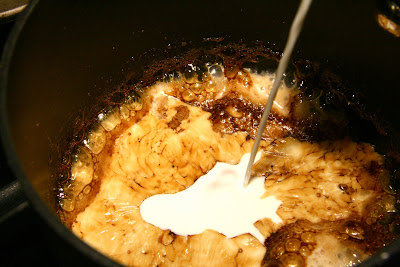 I, however, don't like Scotch, so I was happy to absent-mindedly stir bowls of ingredients (unnecessarily) and provide for the music (alternating between singing David Bowie and the music from Les Miserables). We decided to make two variations of the pudding: one for the girl who thinks that Scotch tastes like burned jet fuel, and one for the other, who has instituted a cocktail hour in our household. We decided to make my version (1/3 recipe) using none of the scotch, double the vanilla, and a tablespoon of eggnog, and my sister's (2/3 recipe) was made using the technique whereby the scotch is added while the milk mixture is heating, so that we didn't get that "I'm eating cold, mushy congealed raw scotch" sensation. 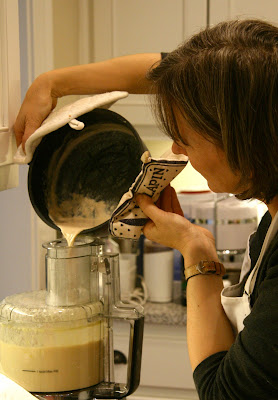 Despite several mishaps, which luckily all happened to my sister's (non-alcoholic) batch, the puddings tasted fantastic. Besides forgetting to set aside some milk for the sugar/egg mix rather than dumping it all into the hot sugar, I started making the next batch in the Cuisinart before the first batch had been through its final mixing. We made do with a whisk and Mom's whisking talent and arm-power, and though slightly lumpier than the next batch, it was v. good. Having learned from our mistakes, the Scotchy batch came out picture-perfect, and tasting just like butterscotch should. 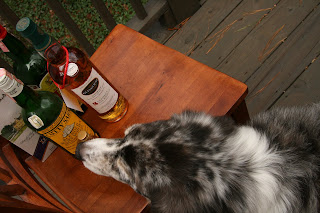 here's the real boozehound in the family.

Hi, Nancy here! This pudding was our dessert for Christmas dinner. We found it absolutely delicious. All of us preferred the "with scotch" version - even the scotch-hating j.d.e. It was silky smooth (from the food processor) and subtly butterscotch-y (from the scotch).

We had such fun cooking this together - I'm so thankful that my girls are such competent hands in the kitchen and also that they're great at writing guest posts! I'm going to cry when they leave home this weekend, going 950 miles and 4,700 miles away, but in the meantime we're doing lots of cooking... and talking, and laughing!


I've had fun baking all 5 of December's recipes. Luckily we were given leeway on which order we could bake and post our creations; this was a huge help during the busy holiday season!

The pudding was technically last week's Tuesdays with Dorie assignment, and was chosen by Donna of Spatulas, Corkscrews & Suitcases, who made an incredible butterscotch pie with it (you can find the pudding recipe on that post or on page 386 of Dorie Greenspan's book Baking From My Home to Yours. )

This week Anne of Anne Strawberry chose the Tall and Creamy Cheesecake (which I posted last week!). Go to her post to see an incredible peppermint bark cheesecake and find the recipe. Or you can pick up your very own copy of Dorie's book (cheesecake recipe on page 235-237 ).
Posted by Nancy/n.o.e at 12:03 AM

Awesome guest post :) I'm impressed at the varieties of scotch you have - I had to make a special trip for mine!

Love this guest post! Even though I would have opted to sing Les Miz tunes with J.D.E. during the scotch-selection process, I suspect that A.L.E.'s taste-testing probably made all of the difference in the finished product! Way to take one for the team, A.L.E.! Having made cold, mushy, congealed raw scotch myself, your pudding sounds just perfect to me. I think that adding the scotch with the milk was a great call! I hope that you all enjoy the rest of your visit, and have a happy new year!

I love your post and all the photos are just great. I have not made this pudding yet and now I think I will have to try it. It is always fun baking and cooking with the kids! Hope you have a wonderful new year Nancy!

All these fine whisky's, the shouldn't end in a pudding. Great post.

What fun! I can't think of a better way to spend a holiday afternoon - cooking together with bottles of scotch! :)

Fun times in the kitchen! Great post. The more I see all these puddings, I'm bummed I didn't make it. Someday!
Glad you all liked it.
Happy New Year!

I was really disappointed with the pudding, it was just to bland for me.

I love the guest post! It looks like you guys are having a ton of fun and that pudding looks wonderful. Happy new year!

What a fun time in the kitchen. The pudding looks perfect. I skipped that one. Way to go on getting all of Decembers recipes done! HappY nEW Year!

Nice stash of scotch!! I am glad you all enjoyed this...I did not make this recipe! Great guest post!

Love the guest post! I don't make pudding very often, this one looks like a really special treat!

I can't wait until my girls are old enough to have the patience to finish a recipe with me. Look so much fun. The pudding looks delicious!

Faces!! What pretty girls you have, and great guest posters. Or post-ers. Your organization skills, I am in awe of.
Anyway, thanks for the congrats on my twin grand babies. I can't wait. They have been hoping for this for some time.

I'm glad to hear that the scotchy version was officially determined to be the best. I suspected so.

What lovely and talented guest-posters you have! I bet out of all 350+ TWDrs your pudding had the best Scotch research behind it. Good idea adding the scotch to the cream. I have made a note in my book. Happy New Year!

How neat that you all got to make this together. I enjoyed reading the different points of view. =)

Great post! I hope you have all enjoyed your time together.

How wonderful! I love the guest authors. It sounds like you all had a blast.

Making two different batches of this stuff at the same time sure was adventurous. Nicely done!

Love the scotch experimenting! Finally, someone with a collection to rival ours. ;-) Nice pudding.

We've already made the KAF muffin bread. As a matter of fact, my seven-year-old made it almost entirely on her own! Love that bread.

Great post, I bet all of you had fun!

it looks so delicious! glad the lovely guest posters had a good time with this dessert. happy new year :)

I LOVE that you did this as a family! The guest post was a winner. I hope you all have a lovely New Year~

Your girls made me giggle. Love their post! Especially helpful to me since I haven't made the pudding yet...oops! Kind of dropped the ball. Anyway, nice to have a scotch expert in the house for the project. Yes, so cool for all of you that you share an affection for cooking and food. Funny how the apple never falls too far. Right? I have enjoyed reading your posts this year and look forward to more. Have a wonderful New Year with your girls. Thank you so much for your gracious comments
AmyRuth

Great guest post! I know how you feel with the girls going home. My babies are 1200 miles away and I miss them everyday!

Your daughters are as talented writers as you. I loved reading their post.

I'm already getting teary at the thought of my son going away to college. I'll be a basket case if he ever moves far away...

I keep telling myself, "This is all part of parenting..." Sigh.