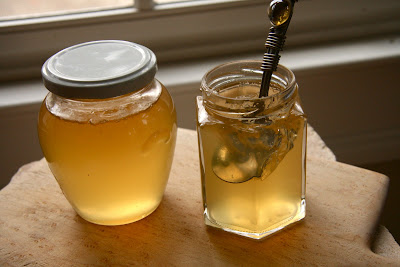 My younger daughter, J.D.E., does not think it's worth gracing the Thanksgiving table with her presence unless cider jelly is on the menu. I found our long-favorite Cider Jelly recipe in Gourmet a long, long time ago, (it's so ancient I can't find an online cite for it) and we have been making it for years. It has become one of J.D.E.'s Thanksgiving specialties (she also makes a killer apple pie). It's gelatin-based and molded, and can be just a bit frustrating if/when all the spices drift to the bottom as the gelatin sets in the refrigerator. But we love it just the same. I'll have to say that last year we had a good deal of holiday drama because I forgot to buy cider for making the jelly. (recipe at end of this post)

This Thanksgiving, with J.D.E. safely ensconced on another continent (I jest; we missed her terribly for the holiday), I thought it would be safe to experiment with - dare I say it? - a new cider jelly recipe. Somehow I'd stumbled upon a recipe for Sage Cider Jelly, and given my general obsession with All Things Sage, I just had to try it. This recipe is a true jelly, made with pectin and everything. Now, I have never done any canning; in fact I'm pretty much freaked by the whole sterilizing concept. So I decided that instead of sterilizing and processing the jars, I'd make a half recipe, put the jelly in the fridge, and eat it in a reasonable amount of time.

- This recipe was pretty straightforward. I made it pretty much as written, except I skipped the food coloring (and the canning/sterilizing aspect). Luckily my sage infusion was a nice *sage* green and my cider was a pretty yellow, the final jelly is a lovely greenish golden color.

- I capped the jelly loosely and put the jars in the fridge to finish cooling and to set. It worked! The jelly has a perfect jelly texture!

We liked the jelly a LOT, and will definitely make it again. The lemon combined with the cider gave a nice fresh apple flavor, while the sage's contribution was very, very subtle. Too subtle, actually. Next time I will try to boost the sage quotient. I'd also like to make our regular cider jelly recipe with this infusion/pectin approach rather than the molded gelatin approach.

Here's the recipe for our usual Cider Jelly: 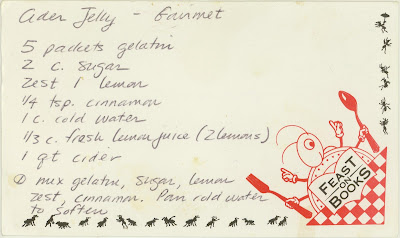 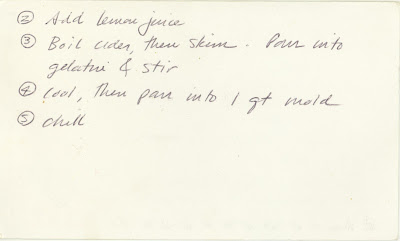 This sounds great!! You'll have to let us know what J.D.E. thinks about how this version compares with her tried and true favorite. Also, I'm glad to see that you getting to work on beefing up your jam and jelly collection, Nancy -- it was looking a little sparse the last time you posted about it. I hope that you are having a great trip!

P.S. I finally made the World Peace Cookies. Now I understand the hype. I made them to send to David's great aunts, and it nearly killed me to part with them. I might just have to make more tonight!

This sounds interesting. I did some canning for the first time about a year ago. It's really not hard, just time consuming. I get so happy hearing the lids pop as they seal. It makes me giggle every time. :)

wow, i've never heard of cider jelly. this sounds amazingly delicious... i love the addition of sage. the color of this is so beautiful - pale, translucent, so lovely. i'll bet this was delicious!

Some people don't even sterlizie their jars--just put boiling hot jelly in sterlized jars and let it sit, upside down, until it seals (which is how you do pickles, too).

I did tomato pickles that way this year (I've never done them before) and pomegranate jelly--but I boiled the jars with the lids on. That was the easy part. Getting the seeds out and then juicing it was the hard part--it took about 10 hours with 3 little helpers to get 2 cups of juice.