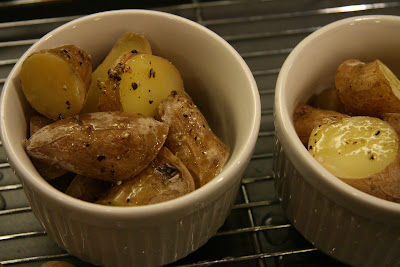 My box of veggies had a pound of lovely fingerling potatoes last week, perfect for trying a new recipe. I had a few in mind, but decided to see if Alton Brown's Perfect Fingerling Potatoes could live up to their title. Reading closer, I saw that salt crystals were supposed to form as the potatoes were resting on a drying rack. Many reviews concluded that these were too salty, but one reviewer mentioned that they were like potatoes she had eaten in Syracuse. Ooh, this was a recipe for Salt Potatoes, which I'd eaten at a fair in August in Central New York!

Now, if ever a recipe was perfect for our family, this would be it. We tear through salt at record pace, especially my husband. He has clinically low blood pressure, though, so it's OK. A low sodium diet would be possibly the worst culinary sentence that could be passed on our household.

It had never occurred to me to make salt potatoes, just as I'd never make funnel cakes, or deep fried mars bars, or kettle corn, or any other "fair food" I've run across. But fortified by Alton Brown's claim of potato superiority, I dove right in.

-This recipe is simple, a ton o' salt, some water, and potatoes. I halved everything for 1 pound of potatoes. 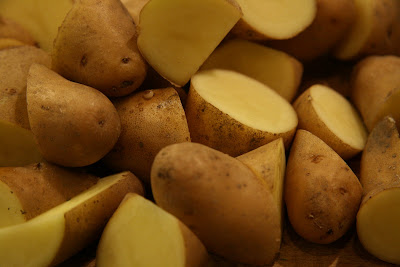 - I cut my potatoes because they were not "small" fingerlings

- I used some "ice cream rock salt" that I'd bought for my previous ice cream maker, of recent memory (before I realized that it was dearly departed).

- While the potatoes were simmering away, a salt crust kept forming on the sides of the pan. I brushed it down with a damp pastry brush, but this was largely for my own amusement. Don't worry about the quantity of salt on the sides; there will be plenty for the potatoes. 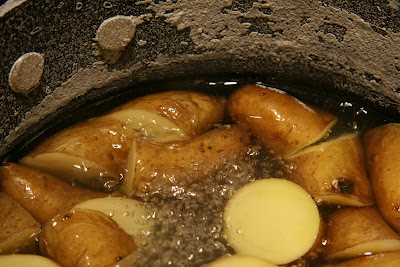 - Salt crystals did form as these potatoes sat on the rack. You can probably see them if you click on the photo below, and the top photo. 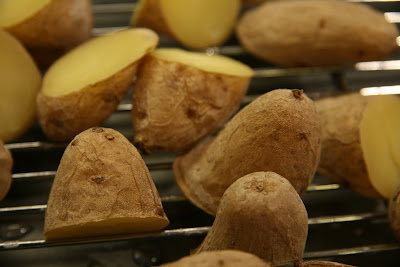 I served the fingerlings drizzled with a melted butter/cracked pepper mixture.
These potatoes were really salty. Duh. They were tasty, and brought back memories of sitting in the food tent in Bouckville. I think these might have been even saltier than those, and they had a nice crispy crust that the ones in New York had lost by swimming for a few hours in a lake of butter.

Besides our family, however, I don't know anyone else who loves salt enough to serve them these potatoes. Unless I run across some folk from Central New York who are homesick! These would be best eaten at lunchtime, because you will be thirsty for hours afterwards. I'd might try cutting the salt quantity by a quarter to a third next time.

I'm not sure I'd call these fingerlings "perfect" as Alton does, but we did really enjoy them.
Posted by Nancy/n.o.e at 6:20 PM

I know that we'd love these. I often think that if I had to give up all of my spices except for kosher salt, it would be okay. I've never heard of salt potatoes before -- clearly, I need to get myself to more Central NY fairs! -- but they sound really great! I'd just wash it down with a funnel cake.

I have to admit that I had one of those "whoa! It's a small world!" moments when I saw your comment earlier! Yes, David and I graduated from UVA Law in '97 (he went to college there, too). I'm from Prospect, CT, and went to college at Fairfield University (spooky small world!) We actually got married in Fairfield, at the Fairfield U. chapel, by one of my favorite Jesuits! Sounds like we are a year apart on the "Reunions" cycle at UVA -- we were in C'Ville in May 'O7 for our 10 year. The hard part about going back is figuring out how to fit in all the eating that we want to do in such a short period of time!

We love anything by Alton Brown, and I'm sure these will be no exception. Thanks for the the test run!

Well, Cathy, I just know we have unwittingly crossed paths at some point. We just MUST have. My parents went to Mass most Sundays at Fairfield U, and I always went there when we visited (with my girls). Father Carrier was our favorite priest - we were always challenged by his homilies.

Like your husband I was a "7 year man" at UVa - in fact I started college as the 5th class that included women (but they ramped up very quickly, so the numbers were pretty even, if the attitudes lagged just a tad).

When I've driven with my daughter to her school in Massachusetts, we take I-81 and try to detour to C-ville for a sandwich at Foods and a grillswith on the Corner. Fitting in the food and the beautiful sights - the mountains and the lakes - are nearly insurmountable hurdles for a short visit. As a result of those visits, my daughter is now talking about UVa Law in a few years!

I was in CT a few weeks ago - at an island off of Mystic - and the leaves were just beginning to turn. It's so pretty there in the Autumn.

I haven't been to a country fair in years...there was a Belgian-inspired pommes frites restaurant in Boston for a while (that's literally all what they served, with different sauces) but not surprisingly it was short-lived... tho nice while it lasted!

{I love the (first) Hay Day Cookbook! ... the vegetable lasagna, the chilled peach soup ... let's both post from it sometime. I have the second one too - good but not the same.}

See you guys on Tuesday...
Audrey

I'll bet my husband and brother in law would like them. They're the types that salt their entire plate before digging in.

They look very intiguing, thanks for sharing :)

Wow! Father Carrier married my best friend and her husband (they actually live in Fairfield now -- we hope to visit them over Thanksgiving!) Father Regan (do you remember him?) married David and me -- I just loved him. When we were meeting with him before the wedding and going over options for music, he said "now, these are the approved selections, and if you have your heart set on something else, I think it is easier to beg forgiveness than ask permission." That's my kind of priest! (Turns out that David and I are just boring Pachelbel/Trumpet Voluntary/Ave Maria sorts anyway)!

My parents bought a little house here after my second child was born, so they split time between here and CT. We don't get back as often as we used to because getting there is quite the production with three kids, and my parents are here half the year, but my sister is still in CT (in Stamford) and other family and many great friends are there, so I always love getting back.

I do think that C'Ville is God's country. It will be hard for us (especially David) not to "strongly encourage" the kids to go to UVA when the time comes! We still look at the "properties" in Albermarle Country whenever the alumni magazine comes, and pick out the ones that look like suitable retirement homesteads. ;)

mmmmmmmm! I'm a potato fanatic, so these looks delicious!

These look amazing. I wonder if we have fingerling potatoes over here in Germany...

Well, considering that potatoes are practically the national dish in Germany, I'd imagine you could get every variety there. But if you can't find fingerlings, you can use any thin-skinned/ new potatoes (like those little red ones). Just cut them into large-ish pieces and you're good to go. You can most likely use any salt, too, because it melts in the water as it boils.
Nancy

Audrey, you're on! I'm happy to cook from Hay Day anytime. Would we do the same recipe, or just the same book? Fun times!

Cathy, I don't remember Fr. Regan, but I may have met him at some point. C-ville is beautiful but I have always heard that the social strata there can be a bit isolating. You have the landed gentry, the sports-and-entertainment types, the faculty, etc., and they don't mix all that well. We had friends from our law school class, and the husband went to work for the law school (but not as a prof) and the faculty weren't particularly friendly to them.
Nancy

We love salt potatoes! When we lived in Rochester NY, they were a weekly staple. I tried to make them years ago and erred very very seriously in the amount of salt that I added. That was one puckery little dinner. I ahven't made them myself recently, but now you're sure making me want to.

These look amazing! Oh, how sad I am that my family loathes extra salt.

Guess I'll have to make them for just me. And, by Alton Brown? Perfect!