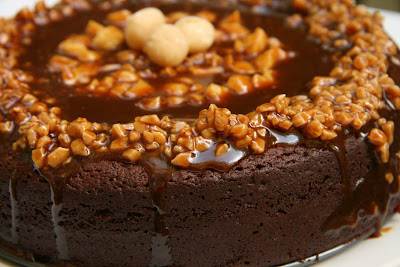 Last week, the "brûlée" part of creme brûlée (literally "burnt cream") totally eluded me, but this week "brûlé" found me even though I wasn't looking for it!

You know what they say about getting back on the horse? Well, I was still a little bit bruised from last week's mishap in the stove-top caramelization saddle, but 4 days later I got back up on that cooked-sugar steed for another TWD recipe.

But first, the cake -

-I made a few tiny changes:
a) Eggbeaters in place of the eggs
b) Lyles Golden Syrup instead of light corn syrup

- I followed a tip I read long ago: when making a chocolate cake, dust the pan with cocoa rather than flour; it prevents that whitish crust that can form on the edges of a chocolate cake when you dust with flour.

-My cake baked for 41 minutes at 325 degrees (my springform is a dark nonstick surface, so I lower the prescribed temperature). 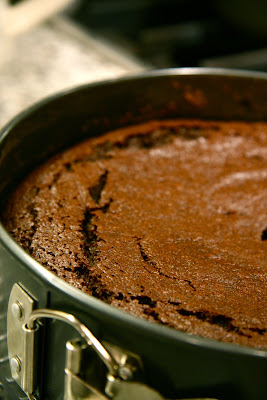 Now for the caramel:

I did some reading about caramel. It still sounded tricky to me. David Lebovitz suggested having a bowl of ice water nearby in case of burns. Molten sugar is not only very hot, but it's very sticky. It adheres to the skin and just keeps burning. 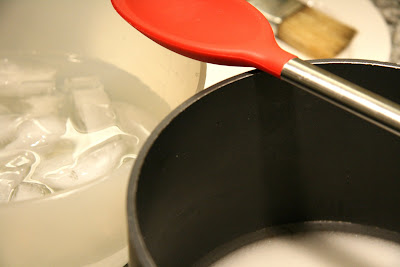 So I set everything up and started heating the sugar/water/corn syrup mixture. 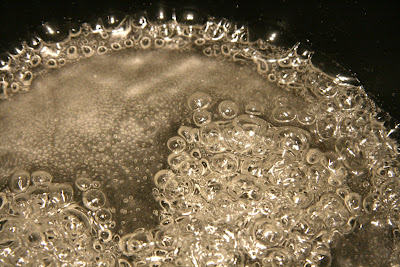 The sugar turned a lovely deep amber color, and I added the butter and cream. 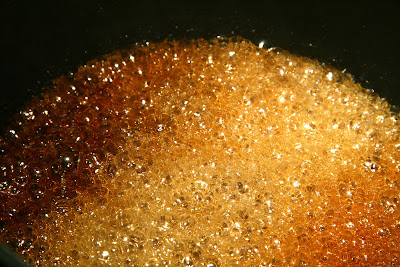 It looked perfect, but I noticed a slightly scorched smell. And taste. Or so I thought. I really needed another opinion, but nobody was around except the dogs. And although the pooches were ready to oblige, I don't think their palates are discriminating enough. So I kept tasting the caramel, and finally lost all perspective. My conclusion: The caramel had character, a note of sophistication, really. In truth, I was tired of working with hot sugar, had no more cream, and not much time. So I used it.

Looking back on the cooking process, although the sugar never burned I think one little area (top left in the picture above) might have scorched (probably when I was shooting the picture!) and that flavor spread throughout the pan as I added the butter and cream. Although Dorie's directions said not to stir during caramelization, I wonder if swirling the pan might have helped it cook more evenly.

I don't know what it is about peanuts + chocolate. Dorie is a big proponent, but me? Not so much. The first time I heard that Snickers were the most popular candy bar, I thought, "Really? It has peanuts." (Now, I'll grant you that chocolate and peanut butter is a match made in heaven, but that's completely different.)

So peanuts were not an option. I decided to use salted macadamias instead, since they had worked well in my Chocolate Chunker cookies a few weeks ago. I was baking this cake for my book group, however, and one of the guys, JT, doesn't like nuts, so I decided to put some roughly chopped macadamias just in the center of the cake. For the outer portion of the cake, I used some toffee bits left over from the Banded Ice Cream Torte. JT could just push aside a few nuts from the center of his slice and enjoy the rest.

This cake was very, very good, thank goodness! The cake part was not as dense as I was expecting. It did have a brownie flavor to it, but to me it also resembled devil's food cake. 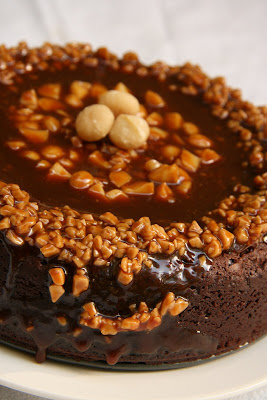 Because I divided my toppings into rings, I had three separate taste combinations:
a) In the center section, the mellow buttery chopped macadamia nuts smoothed out the bitter notes in the caramel, and the salty crunch added a great counterpoint to the dense chocolate and sticky caramel.
b)The middle ring was plain caramel, which really spotlighted the textures of the cake layer and the topping. The two flavors combined in a pleasantly complex way.
c) The toffee pieces in the outer ring had a similar flavor to the caramel itself, and provided a nice crunchy texture.

The caramel itself had a pronounced flavor (that was not "burned"). The tasters at book club said that it was kind of a "coffee" taste. It reminded me of toffee - which made the dessert like a cake version of a Heath bar. Which is a very good thing. What's interesting is that both of the mix-ins had the effect of mellowing out the strong edges of my (scorched) caramel's flavor.

Ice cream or whipped cream may have been good with this cake, but I didn't have either one. Not that the cake needed anything else. 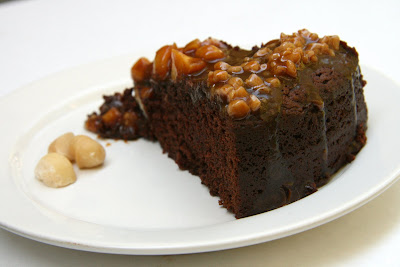 In sum, I don't really know if my caramel was "slightly scorched" or "strongly caramelized", but luckily we ended up liking the taste. It was an adult-type flavor. And the leftover caramel was pretty good eaten with a spoon right from the fridge!

The Caramel-Peanut-Topped Brownie Cake on pages 264 and 265 of Dorie Greenspan's book Baking From My Home to Yours was chosen by Tammy of Wee Treats by Tammy. You can find the recipe in Tammy's post, but I'd say buy the book!

{An aside: I'm out of blogging range this week - have set this post up in advance - and won't be reading any blogs or posting any comments. I'll catch up with everyone next week!}
Posted by Nancy/n.o.e at 12:25 AM

It sounds like your caramel was just perfect - not too wimpy, not too burnt. And I like the rings of different toppings, it's much more visually interesting than just nuts all over.

Good tip about having the bowl of ice nearby. I got a little sticky caramel burn on my fingertip that could have used an ice cube massage. Love your alternating caramel-peanut rings!
Clara @ iheartfood4thought

I wish I knew that caramel making could be tricky before diving into it with my head in the sand! Nice precautions, and it sounds like you achieved the perfect caramel! Your cake is gorgeous beyond words -- I think your "rings" of topping on the cake makes for a much more attractive presentation than just spreading the nut/caramel combo across the entire top of the cake. I am glad this was a hit, Nancy -- it really looks perfect!

Great presentation on top of the cake!! It looks delicious

Your cake is gorgeous. I bet the macadamias were were really good. Sorry you burned yourself though!

Wow, your cake looks amazing. I love the idea of using toffee and macadamias.

Yours sounds great! You are so creative. My caramel not only scorched, it burned to a crisp. And my second batch was under-done. So I failed this week. But I'll try again thanks to all TWD'rs that encourage me! Love your three rings idea.

I'm not a big peanut fan either, so I went with pecans instead. Macadamias sound good, too! Nice job on the cake.

Eek, the caramel got your thumb! I wish I would've known that last year when I burned my finger. Hopefully your thumb heals faster than my finger. Mine took about a month for the skin to completely heal.

Anyway, I love your cake with the various rings on top. A little something for everyone to enjoy :)

I loved the rings of decoration on the cake. Very professional looking! I also enjoyed the leftover caramel and used mine for dipping strawberries. I think I liked that part more than the actual cake, but I do think the cake was tasty. Yours looks wonderful!

I love caramels that are just on the verge of being burned- sounds like it actually worked out perfectly. I imagine you caught it just in time.
Also, your cake is one of the few I've seen photos of that didn't turn into a single giant crater. Gorgeous!

Love the use of the macadamia rather than the peanuts. Love the circles on the cake. Looks very sophisticated. Take care of that finger.

Sorry about your thumb, but if that's what it takes to get a cake like that, I'm willing to sacrifice all of your digits.:) I love the three rings of your cake. I didn't know it was possible to add any more wow to this cake's appearance, but you pulled it off.

Looks great to me! The placement of the nuts are very pretty.

Great looking cake! And yes you can swirl your caramel, just don't stir it!

your cake looks so pretty with the rings of goodness! :) great job! i'm not a huge peanut fan either. the macadamias sound very tasty!

The macadamia nuts sound like a great substitution - your cake looks delicious!

Your cake is gorgeous. Your caramel sounds perfect. It is trying...

Looks great! I wasn't crazy about the peanuts either. I think I would have liked it much better covered with pieces of toffee. Why didn't I think of that?!

Macadamia nuts would be great too. And dividing your cake into rings of different toppings is a great idea!

I love how your brain thinks. Thanks for sharing your creative touch. Your caramel looks delish. Hope you had a great trip away.
AmyRuth

Plus Triple flavors all in one dessert.

I love the little island with macadamia nuts surrounded by the ring of caramel. Your photographs are beautiful and your adaptations are inspired. I love Lyle's Golden Syrup after having bought several tins to make some Nigella Lawson recipes. It's so much richer than corn syrup!

Despite the fact that I had to skip this recipe, I do plan on making it eventually. By the way. I agree with you about the peanuts!