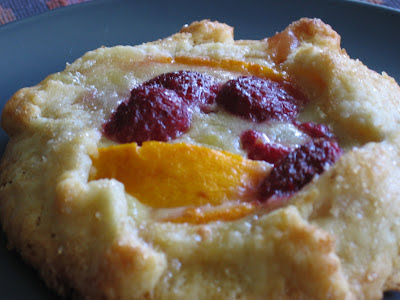 For this week's recipe Michelle of Michelle in Colorado Springs chose Summer Fruit Galette, page 366 of Baking from my Home to Yours. You can find the recipe on Michelle's blog entry. Essentially a galette is a rustic pie, with the pastry rolled into one large circle and folded up over the filling.

My mother was an accomplished baker of pies. Every day when the four of us children took our afternoon naps, mom baked an apple pie. When we came downstairs from naptime we were greeted by warm pinwheels - the little cinnamon-butter rollups she made with the scraps of pie dough. We ate the pie for dessert after dinner. Yum! Mom's tender shortening-based crust paired perfectly with the just-sweet-enough apple filling.

Despite this wonderful heritage, I've not had great success with my pie crusts. I'm very much a novice baker. I'm glad to have the practice - and the great directions - that Dorie's book provides!

I had a bit of a dilemma about the galette. It's my first official week as a TWD member, so I did want to post. But we were headed out of town and we'd just finished the cobbler (and a bunch of other baking). Dorie says that galettes are great for freezing, so I decided to make mini galettes, sample one and freeze the others unbaked.

In hindsight I wish I'd divided the dough and rolled each part separately because I think I handled the dough a bit more than optimal. I rolled one big rectangle and cut three 6" circles (well, two 6" circles and one that I gently pieced from two big scraps - you can see that in the picture below, on the right). I chose to roll the dough between two sheets of parchment and it go a bit rough by the time the galette hit the oven. I did chill at every step, except for just before baking, when I forgot. 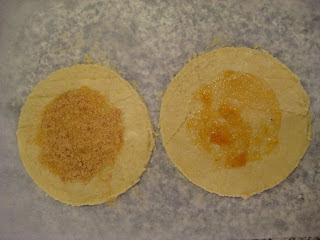 I lined the pastry with Stonewall Kitchen's peach amaretto jam and graham cracker crumbs ( 3 3/4 inch circles) before arranging sliced ripe Georgia peaches and red raspberries, then folded the pastry up around the fruit. I used demarara sugar for the pre-baking dusting. I didn't think the custard step through very well, and probably baked the galettes a bit too long before adding the custard. I tried to give the custard enough oven time to "set", by which time the crust was a bit over-browned on the bottom. Also, I was only able to add a teaspoon of custard to the galette. And, I forgot to dust with powdered sugar at the very end.

The Verdict:
The little galettes were pretty time consuming. There were a lot of steps, and chilling/freezing at every turn. But also many of the techniques were new to me (for example, I've only had my food processor for a few weeks, and have never used it for pastry.) Despite the challenges, the little galette tasted fabulous. My husband savored every last crumb and pronounced: "This is one of the best things I've ever put in my mouth." I think my mother would be proud - I should have saved a bite for her! And I made cinnamon pinwheels with the dough scraps...

{Update: November 7, 2008:
We have been enjoying the galettes that I froze uncooked. I just popped them out of the freezer and right into the oven - it takes a few extra minutes to cook, but tastes wonderful. Having a ready-to-be-cooked galette in the freezer is like having money in the bank!}
Posted by Nancy/n.o.e at 9:38 AM

Your mini galette's are beautiful. They look professionally made. KUDOS.

Welcome to TWD, your minis are adorable.

They may have been time-consuming, but they sure are cute. Welcome to TWD!

This wa smy first time making a galette, and it was one big hot mess, but I am enjoying reading everyone elses. I know what I did wrong, and what to change for next time. Love your blog banner!

So cute and I love the name. I can't think of anything as delicious as peach and amaretto jam. Welcome to TWD

You mini's look so darn cute! And wow, your mom baked a pie everyday? That's awesome.

Glad you enjoyed the finished product, I thought it was delicious, too!

Nice compliment from your husband. Great job and WELCOME to TWD. The dough is tender, but worth the effort. I think it's absolutely delicious. Welcome, again.

I think "one of the best things he's put in his mouth" says it all. Congratulations. :)

My mom also made awesome pie crust, so I know the 'pressure' you feel.

Peaches and raspberries is such a good combination, especially with the amaretto adding a little almond flavor - fantastic!
Welcome to TWD!

I have to say that altogether, I liked the blueberry galette more, but I don't really care for cooked apricots and I love berries, but my husband liked the apricot one more because it had less fruit and the custard. So, I guess it depends. They were both yummy, but I thought to myself that I would definitely make the Cooking Light one again.

They turned out so cute! Welcome to TWD - glad to have you in the same "class" as me. Look forward to cooking each week with you!

Your galette looks awesome! Thanks for visiting my blog!

Yum, tiny little galettes and cinnamon pinwheels too? Sign me up! :) Nice job and welcome to TWD!

Welcome to TWD. I'm pretty new, too. Your galettes look fantastic. I can't wait to try these with all sorts of different fruits.