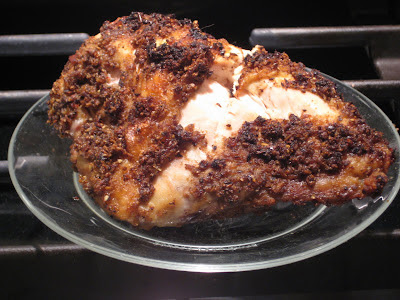 This is the second time I've made Grilled Chicken Breasts with North African Spice Paste, and it's our new favorite chicken! The recipe calls for several different kinds of seeds as well as peppercorns and dried chiles that have to be ground up in a spice mill/coffee grinder or a mortar/pestle. I don't have a spice mill, so the first time I ground everything with a mortar and pestle, over the course of about three days. This was for 4 chicken breasts! I vowed that I would not do the grinding by hand again, and promptly placed an order for a new electric coffee bean grinder which can be used for spices. Unfortunately a week later the vendor realized the grinder was out of stock and cancelled my order. In the meantime I'd decided to serve this at a family gathering, this time doubling the recipe. I took my backup pepper grinder and fed all the spices, the chiles and the peppercorns through it, grinding it by turning the little crank manually. This took several hours' worth of time, and although the results are delicious, I will not be making this recipe again without electrical grinding assistance. I've also been working out substitutions of already ground spices, although I'm sure it will not taste as fresh.

Here is a picture of the spice rub. As far as I'm concerned, this is a bowl of liquid gold: 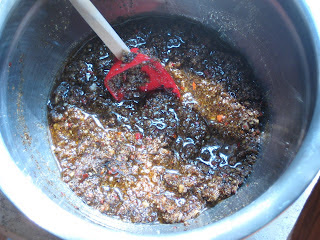 The Verdict:
This is absolutely delicious - do not count on any leftovers. It can be made spicier by increasing the red chile peppers or not as hot by reducing the amount.

Here's the recipe with my notes and directions for broiling rather than grilling:
Yield: makes 4 servings.

special equipment:
an electric coffee/spice grinder or a mortar and pestle;

directions:
1. Coarsely grind chiles, spice seeds, garlic, and peppercorns in grinder or with mortar and pestle, then stir together with salt and oil in a bowl to form a spice paste. This can be kept, covered and chilled for up to 4 days.

2. Rub paste all over chicken. Can do this up to 4 hours in advance, refrigerating the chicken.

3. Oil broiler pan, then place chicken, skin sides up, on the pan and broil the chicken on “convect broil”, high heat, approx. 3” from the flame, turning once, for 7 minutes or so, until skin begins to brown, turning chicken over once with tongs.

4. Moved the pan down to the center of the oven, still set on convect broil – high heat - skin side up, until it is browned nicely. Then set the oven to “convect roast” on 375 degrees until done. Instead of broiling, you can also roast chicken in the oven at 375 degrees.

5. Transfer to a platter and let stand 5 minutes before serving.