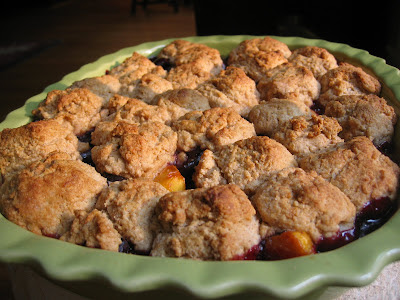 I've joined an online group called Tuesdays with Dorie; these 200+ bakers/bloggers are cooking through Dorie Greenspan’s book Baking From My Home to Yours. My name won't appear on the blogroll until next week, but I began baking along with the group this week.

It was Amanda from Like Sprinkles on a Cupcake 's turn to choose the recipe, and she selected Cherry Rhubarb Cobbler, page 415. You can find the recipe here.

Planning:
I was glad this recipe was chosen. We had about 1.5 pounds of cherries in the fridge that we’d bought for another recipe that we hadn’t ended up making – enough for a recipe and a half of Dorie's cobbler.

Our local Whole Foods did not have any rhubarb so I decided to substitute some very ripe peaches on my countertop. This seemed like a good pairing, especially since the recipe called for ginger in the filling and in the topping. Ginger and peach go well together! I had a few concerns about this biscuit-style cobbler - I didn't want it to be dry and crumbly. I'm so used to a batter-based topping.

Cooking:
The fruit was easy, thanks to my little plastic cherry pitter - it made the job a whole lot more manageable. To the pound and a half of cherries I added nearly a pound of very ripe Georgia peaches. 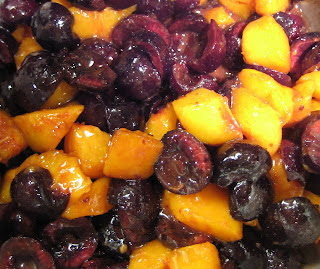 For the dough, I used one part white flour, one part whole wheat flour, and one part King Arthur white whole wheat. I didn’t have any whole milk, so I mixed some heavy cream with skim milk.

I have never made dough in the food processor, so I was eager to try. It all went very quickly, and I processed maybe a second too long – the dough was just starting to ball up on the processor blade. 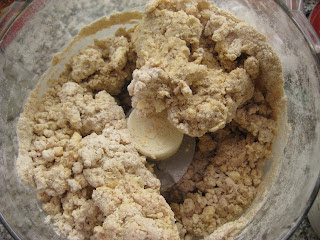 I gently turned it out onto the floured countertop and lightly formed a rectangle so I could cut 30 squares. This was definitely going oh so smoothly!

At that point I realized that I had forgotten to add the salt and the ginger to the biscuits. Darn! I ended up measuring and sprinkling salt and ginger on top of the rectangle and cautiously kneading it into the dough – trying to walk that line between incorporating the ingredients and over-handling the dough.

Then I cut the dough into squares, rounded each one into a little ball, and dotted them on top of the filling in the baking dish. 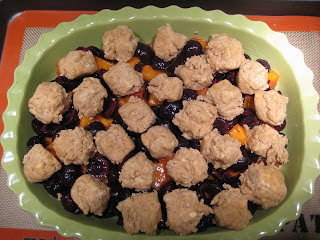 The balls of dough looked pretty good on top of the fruit, and cooked up golden and puffy – and the filling got bubbly – in just under 35 minutes.

The Verdict:
Everyone really liked this cobbler. To my relief it was not dry. The biscuits had great flavor and complemented the juicy fruit filling very well. We loved the ginger and the whole wheat. The filling was cooked perfectly and just the right amount of sweetness. My husband ate this for dessert three dinners in a row – in fact he said he prefers this to my regular cobbler (recipe in the previous post)! I will be making this recipe again.

[update: I just realized that my post is dated Monday, July 21. I'm not trying to break the rules! I wrote the entry on Monday, but put it on a delay to post on Tuesday, July 22. I'm not sure what happened, but this could be a problem since I'm making my galette today and was going to do a delay posting for next Tuesday, when I'll be out of town. hmmm, not sure how to proceed...]
Posted by Nancy/n.o.e at 10:15 PM

It looks lovely and I love the beautiful green dish. Great job. The peaches sound fantastic! Welcome to TWD~!

You did a fantastic job on your first TWD post. It looks delish! I'm glady you took the time to work the giner in... I really think that added so much to the recipe.

Also, you left such a sweet comment on my blog about my grandma's cinnamon rolls. Thank you so much!