{TWD} One Year with Dorie, and Plain Vanilla Ice Cream 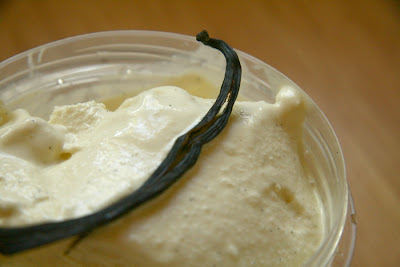 This is a two part post; first will be this week's recipe, followed by a summary of my first year in the Tuesdays With Dorie group.

Vanilla Ice Cream
Vanilla ice cream is a bit like a blank slate; there are thousands of ways to flavor, ornament, and otherwise jazz it up. At the same time vanilla ice cream, plain vanilla ice cream, is a delight in its own right. Made with quality ingredients, nothing rivals the simple pleasure of a dish of vanilla, especially if you are my husband!

- Some of my eggs were on the small side, so I probably has less yolk volume than the recipe.

- The custard thickened and reached the correct temperature (measured by my digital thermometer) almost as soon as I added the hot milk/cream to the yolks/sugar.

I served this ice cream to my book group, along with 4 different brownies in a brownie taste test (haven't posted the results of that test yet). With all of the tasting and voting on brownies, it was hard to get specific reactions to the ice cream. We thought is was a very good vanilla ice cream, smooth and creamy. It's not as easy to make as our usual Philadelphia-style (no custard involved) vanilla ice cream.

My husband and I actually like the taste of the Philadlephia-style more, but this got plenty of thumbs up from the book group. We gave the leftover ice cream to our hosts, and the last thing I heard, our friend JT was hoarding/enjoying the last spoonfuls!

Before TWD my baking skills were quite basic. I could whip up muffins or a quick bread, cookies at Christmas, and the occasional cake for special events. Over the years I'd accumulated some trusty stand-by recipes, and I enjoyed making and sharing baked goods with family and friends.

Baking from Dorie's book is nearly like cooking with Dorie herself. The directions are clear and precise, and filled with tips like how the batter should look or at what stage something is done. I can almost feel Dorie standing next to me in the kitchen, dispensing advice, encouragement or a pat on the back. I still hold my breath every time I have to whip cream or egg whites; making caramel remains a frightening prospect, but, like tempering eggs (which I've done a lot for ice cream), I'm sure that if I practice enough it will surely get easier. Surely. I hope.

I've loved the TWD group; the weekly structure of baking and writing a blog post has both steadied and inspired me. Even though I've traveled a good bit, I've managed to bake ahead, and have never missed a posting in my first year. I'm fascinated by the preferences of of different bakers and tasters and amazed at the variety of recipes that have been chosen. 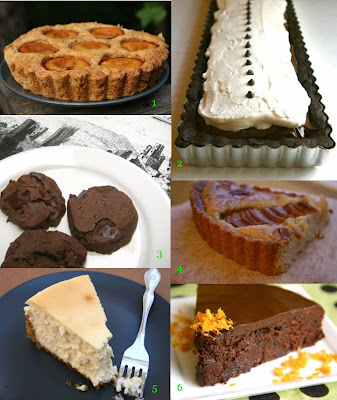 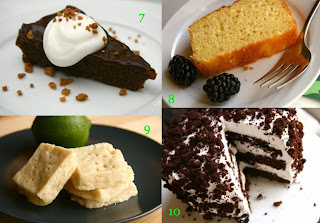 Recipes I did not find tasty:

Recipe that was so rich I couldn't get past it:

Recipe that was very rich but I managed to love:

Your ice cream looks tasty! It was an Italian ice cream maker who invented the spaghetti ice cream. In the middle is a heap of whipped cream. It's now 40 years old

what a great review of the year! I wish I belonged to your book club! it is my turn to host my book club next month - will have to think of something spectacular for supper

I made DL's Philadelphia style ice cream after reading about it on your blog a few weeks ago; we're still undecided on the favorite since this one was really good too, but I'm sure I'll make that one sooner since it's easier and lighter!

So fun seeing your TWD retrospective, I'm glad it's been such a great experience for you. I love how thorough Dorie's recipes are; sometimes they look long, but that's because she's walking you through them.

I love your recap of a year with TWD - isn't it amazing how much we've learned through baking from that book? You've made great strides, and it's so much fun to see how you deal with each recipe. I've never made Philly style vanilla i/c, but maybe I need to now...

I just love all the verbs!

Great post, Nancy! I love all the pictures from your top ten list. And the litany of verbs had me laughing. =) I'm glad you've enjoyed the past year of TWD so much.

So happy to see and read the amazing things you've learned over the past year. This is what food blogging is all about. Keep it going!

Can we get all those verbs on a tee shirt? A poster? Something? Too much fun, we have to do something more with them! Your ice cream looks lovely. My custard came together really quickly for this also and turned out perfectly. I loved both of these posts...so much in them, so much fun to read your top ten, and the list of other bits. One more category: What is your top "go to recipe" from your list which you know will please everyone and be a big hit with minimal efforts? Got an answer?

Awesome retrospective Nancy - it's hard to believe you haven't been baking like this your entire life. You seem to be such a natural in the kitchen (and with yeast!)

I will be watching for your brownie comparison!

Great post! I think my year with TWD is the last part of August. I try to keep track of my top 10 recipes, but I sometimes feel I forget the older ones for the newer ones.

Great post Nancy. It has been a fun year reading your blog and watching all the fun. Isn't it amazing how this experience has morphed into such a passion for food, sharing with friends (BTW glad they liked your brownies and ice cream) and moving on into more detailed recipes. Your photos look lovely and I'm hungry so they Really are looking good. hehe
Congratulations on your one year round up. Happy Anniversary and many more.
AmyRuth

Yeah for your ice cream. Yeah for 1 year of Dorie. Love this post and seeing all your faves. Look forward to lots more!

I love the way you've categorized the year's recipes into a top ten list, biggest technical challenges, etc. The "most repeated" category, in particular, seems rather important. The dimply plum cake was before my time -- I'll have to try it soon!

I think the favorite so far in my home has been the French pear tart. I love these round up posts that you do!

I love the way you did this post. So creative and well, it is just really fun to read.
I have to agree with the dimply plum cake and of course, some of the others! Yum.

I love plain vanilla ice cream as a vehicle for fresh fruit.
Congrats on one year with Dorie!

Fantastic post, Nancy!! I'm with Kayte about all of the verbs. Those definitely belong on something!!

Your top 10 list is great, too. Thanks for reminding me of that great dimply plum cake. I should make that again, soon. And that French Pear tart was one I missed but I know I have to make.

As always, I thoroughly enjoy your blogs and love watching to see what you'll bake next. Here's to another year...at least!! :o) Keep up the excellent work!

What a great retrospective! We have a large number of shared favorites, and unfavorites, for that matter! It is amazing how much you'll learn when you bake (etc, insert your verbs here) every week. This really has been a fun ride! Glad everyone enjoyed the ice cream, even if it probably won't dethrone DL's Philly-style in your house!

Sounds like the year was a great year. I look forward to your next 52 weeks.

I am glad you have overcome your fear of yeast.

I am glad to be your blogging buddy.

Congrats on a great year.

CONGRATULATIONS! What a fabulous review of your accomplishments - my hat is off to you! Love the ice cream - I am "maker-less", so I bypassed. Yours looks quite creamy, delicious and well.... too tempting for words. Even for vanilla! Very nice post Nancy!

A belated but hearty congratulations on your first year in TWD! It's hard to believe you were ever a "basic" baker - your TWD and bread making posts are always so beautifully done, and I learn a ton (for when I someday tackle yeast breads without my bread maker). And your vanilla ice cream is scrumptious-looking.

What a great post Nancy! My one year is coming up soon and I was considering posting something similar (recapping and pointing out favorites) but you really went all out. I love it!

I'm sorry I'm late, I was on vacation for most of the passed two weeks. But I wanted to be sure to comment on this special one... for I'm glad to have such co-bakers as you, to make this TWD experience that much more enjoyable.

Great post, Nancy! I'm impressed that you haven't missed a recipe. We share some favorites, and I also feel Dorie's presence when the going gets tough. But I also feel the love and support of all of the TWD bakers. Joining TWD has been a life changing experience.