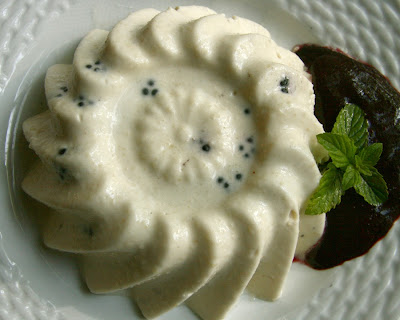 This week's TWD assignment is what Dorie calls Blanc Manger, also commonly known as blancmange. Wikipedia says that it is "one of the few truly international dishes of medieval and early modern Europe." It falls in the category of "white dishes" and was originally made with almond milk, and chicken or fish and considered an ideal dish for the ill. It later became a dessert pudding with cream, eggs, and gelatin. Wow, interesting history, right? Although I’d never actually tasted blanc manger/blancmange I was long familiar with it from years of watching Monty Python. I knew that it's pronounced "blah mahnge" and that as a group, the desserts have a devious ambition to be tennis champions. Check out this video which features blancmanges and reveals that "they mean to win Wimbleton," - one particularly agile blancmange plays a Scotsman for the tournament final:


This is no ordinary boring dessert!

- The blancmange in the Monty Python video was obviously formed in a fancy mold (see the little ruffled knobs around the top edge?), so I decided that no ordinary round cake pan would suffice for my version of the dessert. I chose a vintage mold and an oval baking dish, and I decided to divide a full recipe between the two, and give one to my good friend D, who has celiac disease, as the dessert is gluten-free. A few weeks ago I had planned to give her a dacquoise, but had to abandon the plan when I ruined the ganache. I'd previously tried to give her some Hidden Berry Torte (that became Hidden Berry Trifle.) My fingers were crossed that this one would be a success! I figured I’d give her the one that most successfully unmolded… 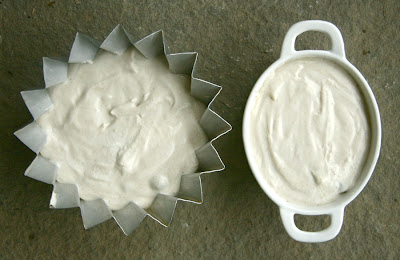 - This dessert would also be suited to individual molds or ramekins.

- I found some ground almond meal/almond flour made by Bob’s Red Mill, which is much finer grind than I am able to achieve with my food processor.

- There is no "undo" button on the coulis. once it's on the white surface of the blanc manger, it's there. (And it starts to bleed into the white pretty quickly also.) Let's just say I need a bit of work on the "coulis drizzle" technique.

- For the blackberry coulis, I combined blackberries, lime juice and agave to taste, whirling it with the immersion blender.

- Oops, I forgot to save out any berries for garnish. Thank goodness for mint leaves! 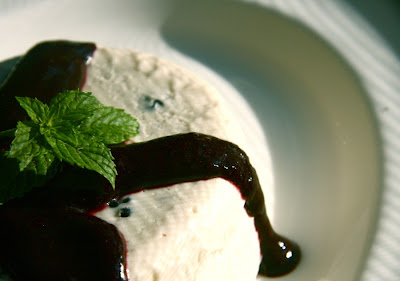 The blanc manger is like a creamy vanilla mouse. We love "spoon foods" around here, so we thought it was deliciously refreshing. My husband's commented, "This stuff is really good. Not as good as ice cream, but really good."

My friend D was thrilled with her blanc manger, and sent me the following email:

"Are you sure it is without gluten…way too good….like, but better than, a crème brulee(sp)…not as overwhelmingly sweet. Wow…was it hard to make? I am going back for just a little more…"

The bottom line: this blanc manger was so versatile and fabulous, I wouldn't be surprised if it took Wimbleton after all. Move over, Roger Federer and Andy Roddick! 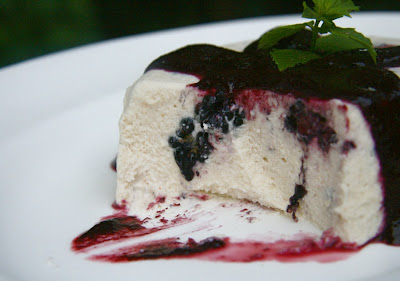 Note: I'm in the middle of celebrating my one-year blogiversary! As part of the festivities, I'm giving away a pretty cool pair of vintage baking pans. Stop by and leave a comment on that post by Friday, July 24, for your chance to win!!
Posted by Nancy/n.o.e at 8:27 AM

Yesssss. Great minds think alike. I too took out my old metal molds... finally I got to use them!

Love your final presentation. I think you had better luck than me for unmolding.

Love the MP clip. That molding bit is gorgeous on your blanc-manger and the blackberries really pretty in it. I agree about the need more practice on the drizzling sauce technique on mine...I used raspberries so it looks like some sort of blood letting over there...yikes. I think that is why Dorie had the sauce in a little pitcher on the side...so doing that next time, too. Maybe just a little round circle of sauce on the top with the berries and then pass the pitcher. Yours looks beautiful and what a generous friend you are!

This looks wonderful. Thanks for the clip. Made me laugh. I love the pictures.

That looks amazing in your gorgeous mold! I'll have to find a neat one to make it in when I do (and with your review, I really will have to make it!)

Absolutely gorgeous! Such a great idea to use the fancy mold; it makes this dessert that much more special.

Beautiful!!! And funny too. Who would have thunk that blanc-manger could be funny? Trust Monty to find a way. (I loved this, btw.)

Too funny! I'm a die-hard Python fan so thanks for sharing the clip... as for your blanc manger, I'm sure it could win Wimbleton- it looks absolutely luscious!

If you're a vanilla freak like I am, you will adore blancmange. Everyone else thinks it's so bland. It's not. My mother used to make it all the time- sometimes with fruit sauces on it. Was thinking about it just the other day! Thanks!

I love how the berries peek out of your blanc-manger. Very pretty mould!

Blanc-mangers are more easy to unmold from a metal tin, just use a blow torch ;-)

It looks gorgeous in the pretty mold with the blackberry coulis.

I don't think I would have understood that Monty Python at all before making this recipe!!

This fancy dessert gets even fancier when its molded in such a beautiful shape. I really liked this dessert as well. The blackberries are so beautiful and even more dramatic looking against the white than raspberries.

I did the same thing! I inherited some of my mother's copper molds, and that's what I used for this. She and my aunt LOVE molds. I've inherited the bug!

Your blanc manger is gorgeous! It unmolded perfectly!!! I used blackberries too, and thought they worked really well. I know what you mean about drizzling the coulis - the picture in the book is so elegant, and mine was rather clunky...

That was the best TWD post! I love that clip and now realize I may have been putting the accent on the wrong syllable. Your first photo is stunning as well. Your friend has a good friend.

You blanc-manger looks soo pretty with that mold! Much more so than using a regular cake pan. I could use practice with the coulis too - I tried to pipe it. HAH! (I hid the messy side in my picture)
Thanks for the tip on finding ground almonds at Trader Joes!

Love the blackberries in yours. And I LOVE your cool mold.

I made mine with Nutella and hazelnuts. After tasting, we thought it wasn't as good as ice cream either, so I dumped it all into the ice cream maker and turned it into ice cream! mMM!

I like your fancy mold. Your blanc manger turned out very pretty. And I'm glad your friend liked it so much. I want to try this again, and put it in a more interesting pan next time.

I love that you incorporated Monty Python into your post. I'm not actually a huge fan, but hubs is so I'm totally going to ask him about the connection between Monty Python and blanc manger :) Yours is gorgeous - that pan you used is so cool, I've never seen anything like it! I think your coulis looks fabulous.

I wished I had a pretty mold to put this in, it looks just stunning in the swirly one. I'm glad you enjoyed it and were able to share it with your friend.

Looks lovely, Nancy. How nice of you to think of your friend. And she definitely sounded like she enjoyed it. Your post makes me think I should have at least tried! Sigh...

Oh my you've sold me on this one. Is there any left?
Sounds fabulous!

Absolutely gorgeous! I love the fancy molds too - I really need to go antiquing and find some like them (because I need more pans :P )

Sounds like your friend really loved it!!! And I actually think your coulis looks amazing dripping down the side! GREAT photos! Awesome clip, too. I can't stop laughing!

Beautiful with blackberries. I need to find some vintage molds. That is just too pretty!

I put the coulis in the pan and then the blanc-manger. BIG MISTAKE!!! It just - sat there.

You know, now that I know you used the exact same almond meal as me and see the inside of yours, I know I added a bit too much. The texture was readily visible and noticeable in mine and yours doesn't look the same - yours looks creamy and light and beautiful!

Ha - love that Monty Pyton scene! So glad that you all enjoyed this, and that your friend got to enjoy it too. Sounds like that is reason enough to make this one again. It looks beautiful!

I bet blackberries would have been wonderful with this! I might have to get more creative with my molding if I do this one again--looks great!

This looks absolutely delicious! The mold you used is gorgeous!

Your blanc manger looks wonderful with the blackberries. I love the contrast in color. Love the mold too. I'm glad it was a success.

Your mold in the photo is really one of the prettiest ones I have seen yet! Its quite lovely. I found myself at the last minute,.....as usual without an 8" cake pan so I used a Texas size muffin pan which unmolded beautifully and worked well for 6 servings. I loved the blackberries with this creamy, sweet concoction. Dreamy!
Perfecto, Nancy!
AmyRuth

Your mold is so elegant! I love blackberries and wish I'd thought of using them. This one was a hit here, too.

Great minds think alike! I was wondering if anyone else would remember a random Monty Python sketch from ages ago. LOVE the blackberry variation and love the beautiful molds!

Stunning, what a great shape! You have convinced me, I need to try blanc manger soon.
(Remember the group? Living on the Ceiling...)

Can I some look at you kitchen shelves? I LOVE that mold. I almost used a vintage pudding mold, but never made this before. I seem to lose creativity when I'm unfamiliar with something.... it looks FABULOUS Nancy - perfect in every way. The video clip just makes it all the more special - nicely done!