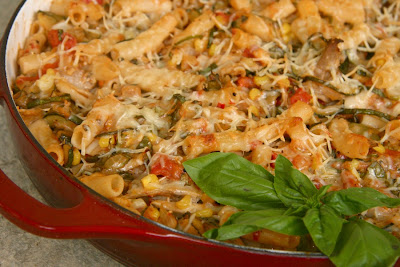 Faced with a rather large zucchini from my farm box, I decided I wanted to make a side dish from the way-back machine - a shredded zucchini, corn and tomato dish that I used to make frequently in my pb life ("pre-blog"). The problem is that I could not for the life of me remember the source of the recipe.

Thank goodness for friends. I gave up on my old recipe and tweeted my desire for a recipe with the same basic ingredients. My bloggy buddy Audrey of Food From Books suggested the zucchini and corn recipe pictured in the most recent, as in "it-came-in-the-US-Mail-this-week"recent, Williams-Sonoma catalog. As fate would have it, that issue was sitting on my front hall chest and when I saw the picture I was convinced. The recipe takes full advantage of high summer's bounty, incorporating corn, zucchini and tomatoes, as well as fresh oregano and basil.

Upon closer inspection I realized that my farm box vegetable was actually a cucumber and not a zucchini (I hope I'm not the only one who's made this mistake!). By then, however, I was fully committed to making the pasta, so I ran out to pick up some actual zucchini at the store. 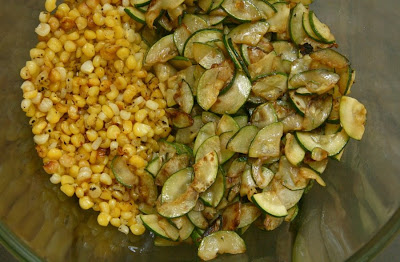 - I had a partial bag of brown rice penne with exactly half a pound in it, which was perfect for this recipe.

- The recipe is not difficult but it also is not quick. The different vegetables must be individually cooked, but luckily they can all use the same pot, even if seriatum. I cooked my corn in one batch and the zucchini in three batches.

- I love using the fresh herbs from my garden! A homegrown hot pepper got chopped and added with the onion also.

- In place of mozarella, I used some Quattro Formaggio shredded cheese mix from Trader Joe's.

- I added some scraps of roast turkey from the freezer to boost the protein profile and make it a one-pot meal. Chicken sausage or white beans would make good additions also. 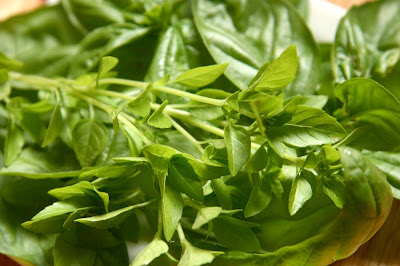 The smaller leaves are Cuban basil, the larger are Genovese
the verdict:

I knew when I planned the meal that my husband isn't the biggest fan of summer squashes, but I didn't realize that my daughter J.D.E., who loves every other vegetable under the sun, strongly dislikes zucchini. My only hope is that the mixture of other delicious ingredients would mask the zucchini-ness for my family members. I thought that the casserole smelled amazing while it was in the oven.

Luckily, everyone liked this dish! To me it had a great balance of cheesy and veggies, and the turkey was a successful addition. My husband went back for seconds, and gave the meal a rating of 9 out of 10. Could we have a summer squash convert? Daughter J.D.E. was very relieved that the zucchini flavor was not particularly noticeable and said "it's good." I'm hoping she isn't too disappointed when it appears on the table as leftovers later this week! 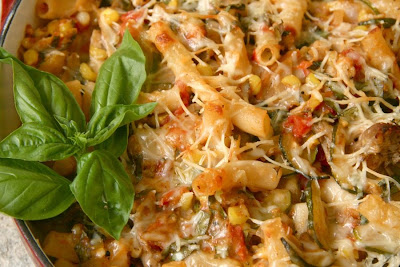 I hate to admit that I am not a big veggie eater, but this actually looks really delicious to me too!

I'm so glad you liked this! Yours looks even better than theirs, so now I REALLY want to try it. I love pasta with veggies...and your additions are a perfect idea (love the white beans esp.) ... and if you ever find your original recipe, I want to try that too!
Audrey

Oh, the irony of having to buy zucchini to make a recipe you picked because you had a huge zucchini to use. It looks wonderful. I'm going to have to pay more attention to the WS catalog the next time it arrives.

That looks so good but I know I'd never be able to convert my non-veggie eating husband, even with a yummy dish like this. Maybe I'll make a super scaled down version soon!

This looks like one amazing dish. So hearty and comforting.

Just like a good old comfort meal, only a lot healthier! Love it!

Wow! It sounds and looks wonderful. I love the colors. I'm glad the family ended up liking it (or it would have been a lot of leftovers for just you. :P )