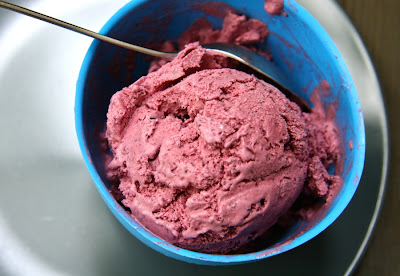 In much of the US in recent days the weather has been just a bit warm shall we say?  I saw the forecast of the advancing heat wave, and prepared to hunker down: changed the filters in the air conditioning system, dug out shorts and tank tops, and closed the blinds against the strong afternoon sun.

And I made ice cream.

The Tuesdays With Dorie group choose Blueberry Sour Cream Ice Cream soon after I joined the group in 2008.  I didn't have an ice cream maker at the time, so I took and excused absence and baked something different that week.  But now that I'm trying to finish every recipe in Dorie Greenspan's book, Baking From My Home to Yours, and with a well-broken-in ice cream maker in its permanent spot on my kitchen counter, this week was the perfect time for me to make that recipe.

- You can find the recipe on the post of the original TWD host for this recipe, Chronicles of Culinary Curiosity.

-  Some lovely local blueberries came in my farm box, so that's what I used for the ice cream.    I like that Dorie gives flexibility to add sugar and lemon juice to taste; I added slightly less sugar and a solid dose of lemon juice.  I cut the amount of sour cream by a little bit because I didn't want it to mask the blueberry flavor.

-  After I finished making the ice cream base I gave it a little taste.  The blueberry flavor seemed a bit mild and I debated whether to make up more of the cooked, pureed blueberries and add them, but in the end I decided that I'd leave the ice cream as it was, and add some fresh blueberries or blueberry sauce when I served it, if we thought it needed something.

I brought this ice cream to dinner with some friends. (I packed it in this container so it wouldn't melt in the 106 degree heat)  Everyone finished eating the ice cream, but nobody raved.  To me it fell somewhere between "OK" and "not that great,"  The texture was nice and creamy, the sour cream added just the right amount of tang, but the blueberry flavor was too faint.  I think the ice cream could have benefited from a lot more blueberries.  My husband agreed, "Something about the blueberries didn't go with the creaminess."  It was cold, though, and a beautiful color!
Posted by Nancy/n.o.e at 5:48 PM

Hmmm. I'm not sure about the ice cream, but I do like the container! :)

Okay, it's so pretty, I am so disappointed you didn't like it all that much because it is so pretty. I liked it a lot. I had to give some away because I was liking it a bit too much. lol Guys here don't eat ice cream, so it was either eat it ALL myself or share with unsuspecting people on the street. I gave it to my neighbor. But it was very very good. Yours looks beautiful. Thanks for the link on the ice cream container.

I remember loving this recipe. I would like to make it again. YOu have inspired me to do just that. i have some nice blueberries I got over the weekend.