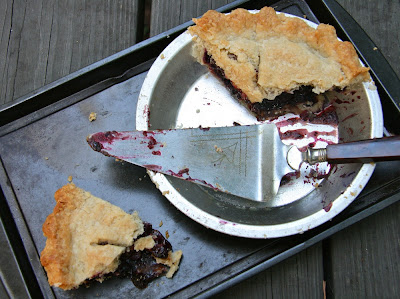 Here's a piece of life advice: the next time you make a pie, make the crust you need and then immediately make another batch of pie dough.  You've already got the recipe in front of you, the bowls and implements are already dirty, and you will not believe the virtuous feeling you will have when you slip the extra dough into the freezer, knowing that with a bit of work now you are saving yourself a lot of time later.
And later? When you look in your freezer and there is a nice disk or two of pie crust, you know that you can have a pie in the oven in a matter of minutes.  This week I found myself in just that situation.  I had some lovely local blueberries from my farm box order, and with the crust already made, I decided on the spur of the moment to bake Dorie Greenspan's Double Crusted Blueberry Pie.  Even though it was late afternoon, I was able to have it on the dinner table in short order.

-  The original Tuesdays With Dorie host for this recipe in 2008 was Amy of South in your Mouth.  You can find the recipe on her blog post.  I'm going a bit out of order, but this is a recipe I'm baking in my plan to finish all of the recipes in Dorie Greenspan's book, Baking From My Home to Yours.

- I made half of the pie recipe in my little 7" mini metal pie pan.  I had actually rolled out and frozen a crust right in the pan.  All I needed to do was to fill the pie and roll out the top crust.  The crust thawed as I mixed up the filling.

-  Sometimes blueberry pies can be runny in the middle from all the juice released by the cooking blueberries.  Dorie combats that in two ways: adding a hefty dose of flour to the blueberries, and lining the bottom of the pie crust with dried breadcrumbs.  I don't use prepared breadcrumbs, but usually make mine by crumbling and baking fresh bread.  I was feeling lazy, though, so I skipped the crumb layer.  I added flour to my blueberries, but somehow forgot to add the full amount that I'd measured out.  As it turned out, the pie was perfect, not at all runny and also not dry.

-  The recipe calls for tossing the berries with lemon zest, sugar, flour, salt, and lemon juice.  Dorie gives measurements but advises that we add the amounts to taste, which makes sense because blueberries can vary in sweetness.  I used a bit less sugar (and I used palm sugar) and a healthy squirt of lemon juice.

- So great was my laziness that I also skipped the egg wash on the crust.  Luckily my pie turned out nice and golden anyway. 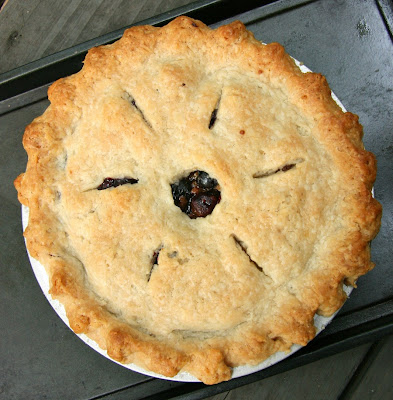 I served this pie at a family dinner last evening, and my husband and daughter agreed that it was an exceptionally excellent blueberry pie!  The lemon zest and juice added a sparkle and brought out the flavor of the berries.  This will be a "go-to" pie in the summer (or even out-of-season with frozen blueberries), especially if I have pie crust in the freezer!
Posted by Nancy/n.o.e at 4:20 PM

Blueberry pie is my very favorite!! I can't remember making Dorie's recipe though I think I did. I am looking forward to a pie of my own this summer, hopefully it looks as good as yours :)

I really need to make more small pies. I have a couple of 7" pie dishes, but I don't think I've actually used them yet. I'd take your advice about freezing the pie dough, but I'm not sure I have room for it with all the other stuff in my freezer. =)

That's beautiful. My little guy is looking ovebr my shoulder right now, begging me to make it. :) I agree: I love having an extra batch of pie dough in the freezer!

Pie looks great! I am looking forward to making this next month. I have never had a GOOD blueberry pie!

Thanks for the tip on crusts, Nancy! I would make more pies but never seem to have time to make the crusts. I will now.

Your pie is beautiful. We loved this recipe...it made a huge pie and I used the crumb trick and it was perfect. Need to one soon...I've probably made it a half dozen or more times. That pie dough in the freezer thing is wonderful...I do that all the time and pies/tarts are just moments away. I think pies and tarts are my favorite desserts to make actually.