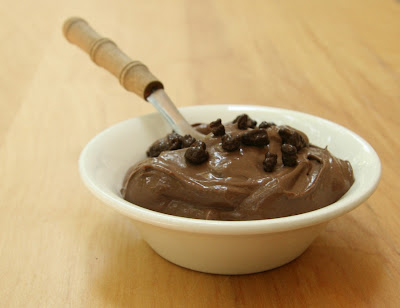 Until I began baking with the original Tuesdays With Dorie baking group, I'd never made pudding from scratch.  Box mixes are very easy and tasty enough.  In the last few years, however, we TWD bakers have tackled homemade pudding on a couple of occasions: split level (vanilla) pudding, and real butterscotch pudding (not to mention flan, creme brulee, cup custard, pots de creme, and various bread puddings - all of these, plus a few non-Dorie offerings, can be found by clicking on my blog's pudding tag).

Dorie has a specific method to her pudding recipes, not difficult by any means, but there are several steps.  The ingredients go in and out of a saucepan and a food processor.  It might seem just a bit... unnecessary, and I know other bakers have taken shortcuts with Dorie's puddings, and proclaimed the results fine.  In the past I've tried it both ways, and I found that following each of the steps produces a smoother, creamier pudding.

The recipe for Chocolate Pudding was chosen shortly before I joined Tuesdays With Dorie in July 2008.  As I have worked my way through the recipes I missed from Dorie Greenspan's book, Baking From My Home to Yours, I knew that the pudding was coming up and I figured it would be a cinch that I'd like it.  This week I got a chance to see.

- Dorie has posted the recipe for her chocolate pudding on her own blog.

-  I was running low on milk, so I used half whole milk and half coconut milk.  If you wanted to make it non-dairy (and you like coconut) you could use all coconut milk.

- After mixing the ingredients in the food processor, when I poured the liquid back into the saucepan it was quite frothy.  It settled a bit as the pudding thickened, and then smoothed out beautifully in its final trip through the food processor.

- I could have boosted the coconut flavor by topping my pudding with toasted dried coconut, but I opted for chocolate-covered cocoa nibs instead.

This pudding was smooth and rich, the best chocolate pudding imaginable.  I liked the little hint of coconut, but I'd love it made with all regular milk also.  The pudding would still be delicious if you didn't follow all the food processor steps, but it wouldn't reach the creamy, dreamy perfection that Dorie's method produces.
Posted by Nancy/n.o.e at 5:28 PM

This was Mark's favorite recipe from the whole book, I kid you not. I have made it countless times and he always swoons, he just loves it. He loved many many recipes from this book, but this is the one he requests over and over and over. Good to know why from your description because I think it is a bit of a pain in the arse to make with the fp and all...however, he says nothing compares to it. LOL.