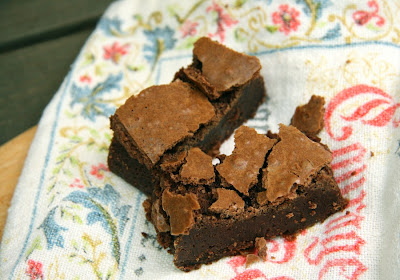 Hello readers!  Sorry for neglecting you lately.  I am here, still working my way through the final recipes of Dorie Greenspan's book, Baking From My Home to Yours, even though this post is a little bit behind my self-imposed schedule.

The upside of posting late is that now I have two versions of these brownies to talk about: regular and gluten-free.  I only have pictures of the gluten free, but if it weren't for needing pictures to put on this post then I'd have never made the gluten-free version.  This is what happened: I baked a full batch of Dorie Greenspan's French Chocolate Brownies for a neighborhood cookout.  It was only when I started this blog post that I realized that I had whisked the brownies to the cookout without taking any photos.  So I decided to bake them again, for photos (and for my book group)  But I didn't want to waste a baking opportunity to try something new: I thought I'd adapt the recipe to make it gluten-free.  There is so little flour in a brownie recipe anyway that I figured it would work.

-  The French Chocolate Brownies were the first pick of my baking buddy Di, of Di's Kitchen Notebook (back before I knew Di).  You can find the recipe on her brownie post.

-  I made a full recipe in an 8"x8" metal pan.  The recipe calls for raisins, rum-soaked then flambeed,  to be added to the batter. When TWD baked these brownies back in June 2008 there was a tempest of controversy about the raisins, but I wasn't about to omit the distinguishing ingredient of the recipe.  I've baked with Dorie's rum raisins before, and again this time the flambeeing was a bit anticlimactic.  The flames were half-hearted, but I guess they burned off most of the alcohol.  I chopped the raisins finely, so they'd be disguised, just in case there were any raisin haters in the group I was serving.

-  I omitted the cinnamon.

-  The brownies baked up nicely, with a dense crumb.  They looked just like a fudgy brownie usually looks, with that shiny, crackly, papery top (sorry I forgot the photo session).  The recipe makes a small pan of brownies, and they disappear quickly.  Just a heads up on that! 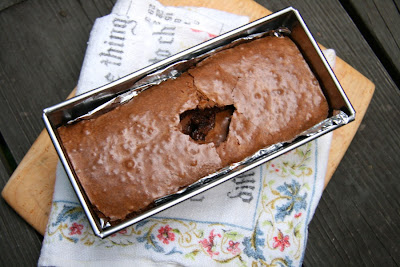 -  When faced with making the recipe a second time I knew I wanted to experiment with gluten-free, so I sought a little guidance as to which gluten-free flour, or combination of flours to use.  On Shauna Ahern's Gluten Free Girl and The Chef blog I found this recipe, which is quite similar to Dorie's French Chocolate Brownies.  I figured I could take some clues from Shauna's recipe and combine them with Dorie's recipe and hope for the best.

-  Shauna's recipe uses teff flour, and I actually had a bag (unopened) of teff flour in my baking stash.  I bake gluten-free from time to time, and at one point I stocked up on different flours.  I was glad to actually try the teff flour.  For those of you unfamiliar with teff, it is a grass-type grain and is used in Ethiopian cuisine (I had to look it up).

-  I made 1/3 of Dorie's recipe which matched with 1/2 of Shauna's recipe, in terms of butter and egg.  Shauna has more flour and more sugar for the same amount of egg and butter.  I decided to "split the difference" on both ingredients.  I made sure to use an extra-large egg (67 grams including the shell) to make sure the brownies held together.  Instead of using some melted chocolate and some chocolate chips, as Shauna did, I used all melted chocolate, as Dorie did.  I would have used darker chocolate but 61% was the darkest I had on hand.  This time I skipped the rum + flames steps for the raisins, and plumped them in hot water before chopping them finely.  I also omitted Dorie's cinnamon and added vanilla extract. I omitted the chopped hazelnuts from Shauna's recipe.

-  I baked the brownies in a 7"x3" loaf pan. Here are the quantities and ingredients I used:

2 oz chopped chocolate (I used 61% dark chocolate)
2 oz butter at room temperature
33 g teff flour
pinch of salt
scant 1/8 cup golden raisins, plumped in hot water, drained and chopped
1/2 tsp vanilla extract
1 extra-large egg (about 67 grams with shell, 60 grams without shell)
scant 1/2 cup sugar
handful of chopped nuts, hazelnuts or any other nut of choice (optional; I didn't include them, but I think they would be great in this recipe)
Follow the mixing and baking directions in Dorie's recipe.

-  I had a hard time judging done-ness of this recipe, even though I used the King Arthur Flour Divot Test.  The divot, which started out modest in size, turned itself into a crater when I wasn't looking.

-  One problem is the thick crust that formed on top of the brownies shattered when I tried to test the brownies, and came completely unattached when I cut them into pieces.

-  These brownies were denser and fudgier than the original recipe; in fact they looked just like pieces of fudge (but with a crust on top).  They spent an overnight in the fridge to make them even firmer and more fudgy.

The brownies from the original recipe were a huge hit at the neighborhood cookout, especially with the host D's college-aged daughter M.  The next day D emailed me:


You should have heard M just now offer her friend one of the few remaining brownies—she is intrigued by what “fruit” is in them!

(Little did she suspect they were raisins!)

The gluten-free batch was equally delicious; fudgy and chewy in texture with crispy edges and crusty tops (even if the bits of crust were completely separated from the brownies).  The bits of raisin provide fruity accents to the deep chocolate flavor.  I served this batch of brownies to book group, apologizing for the top crust issue, and my testers looked at me like I was demented. "Who cares about that?" they said, "They taste great!"  Proving once again that taste rules.

All in all, I'm thrilled that my gluten-free adaptation worked.

Glad to hear that both sets of brownies were a hit! It just occurred to me that I should try adding some of the rum raisins to other brownie recipes; they were my favorite part of the French ones.

And I get the same reaction when I apologize for desserts. (Your story fits with my recent blog post about that.)

I was thinking the same thing as Di...I always apologize for baking missteps and tasters look at me like I'm crazy. Must be why we all get along in our little virtual world! :)

These look awesome. Thanks for posting the g/f details. Hubby has a coworker who is g/f and always laments that she can't try my treats; I promised her to send some gluten-free in next school year. I'll add these to the list!

All those who have allergies and sensitivities will be singing your praises over these brownies.

You rock when it comes to making good gluten-free treats. One day....

The brownies do look delicious.

Nice to have the two versions compared like this...you are so good with the research!