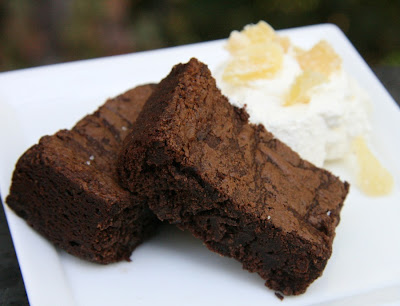 One thing I can say with assurance about Dorie Greenspan's book, Baking; From My Home to Yours: There is no shortage of brownie recipes. As we've baked along in the Tuesdays With Dorie baking group, we've never been far from a chocolate brownie recipe. In fact, we baked brownies just a month ago. But we have not exhausted the brownie category. Today's TWD assigned recipe is Ginger Jazzed Brownies, and there's even one more brownie recipe to be baked in the remaining few weeks of the TWD group.

- Clivia of Bubie's Little Baker is hosting this week's brownie baking session; you can find the recipe on her brownie post, along with some lovely pictures of fall flowers.

- Once the brownies came out of the oven, they cooled for just a few minutes before I put the pan of brownies into the fridge. I love how chilling chocolate cakes and brownies intensifies their fudginess. I tasted one brownie before refrigeration, and it was soft and truffly in texture. After the fridge, the brownies were denser.

Before I baked these brownies I was slightly dubious about the ginger + chocolate combination, which is not a huge favorite of mine. I knew that I'd get a good sample of opinions from my book group, so I made a full batch to bring to the meeting. There were also strawberries and whipped cream at book group, so the brownies were eaten plain and also with various amounts of strawberries and whipped cream.

I'm happy to report that these brownies were very popular with my tasters. I surprised myself by liking the brownies quite a bit. I'm glad that I chilled the pan of brownies; the fudgy texture really helped them. The hefty hit of ginger enhanced rather than detracted from the overall brownie flavor.

I had a couple of brownies left over which I later enjoyed with some gingered whipped cream and crystallized ginger. Turns out I really enjoy the ginger + brownie combination.
Posted by Nancy/n.o.e at 10:23 AM

Fun to discover new tastes, right? I'm working on the pumpkin thing right now...working on it. Your photo is beautiful. I love how you styled it all with the plate and the ginger...very nice. Mark loved these.

I like chocolate and I like ginger, but I'm still skeptical about the two of them together. I probably need to just make some of these and try them out. =) I also need to try that trick of chilling the brownies right after baking them.

Well, now I have to make another batch just to taste the effect of cooling in the fridge. The hardships we endure for this group!
Your brownies look lovely and no surprise that they were a hit at book club.
Thanks for baking with me this week!

I love this blog.. maybe a little too much. You know why? A lot of local folks make things like cakes, brownies and other pastries out of the box. Most of us however, grew up in homes where they were made from scratch. Somewhere along the line, the tradition started to get scarce. Now I know many recipes are available all over the web, but I spend a lot of time on blogs, and so this has become my instant favorite. Thanks and keep 'em coming!