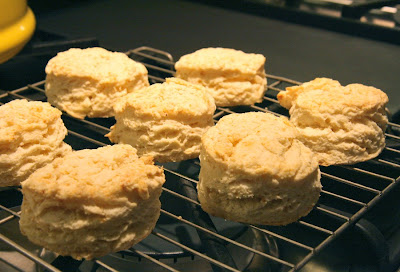 In the final few months of the Tuesdays With Dorie baking group we are finally baking Basic Biscuits! There are many reasons why biscuits are a perfect recipe to have in your baking arsenal. They have but a few ingredients, most of which are usually on hand, they are simple to put together, and they are appropriate to every season of the year and occasion. Biscuits can be the vehicle for lots of delicious combinations: butter-and-jam, sausage-and-gravy, mustard-and-ham, roast beef-and-horse radish.

- Jennifer of Cooking for Comfort chose Basic Biscuits. You can find the recipe on her biscuit post.

- Although I'm not a native Southerner, I do know enough to use White Lily Flour for my biscuits. These were extra-special because I had a little stash of the original White Lily, from before the company was bought and the mill moved out from Knoxville, Tennessee to Ohio.

- The recipe is for biscuits with milk, but Dorie gives a variation for buttermilk biscuits, which is the kind I baked.

- Northern folks tend to add sugar to things like cornbread and biscuits, but that's not the norm in the South. Dorie's recipe calls for some sugar. I compromised by adding just a touch of molasses crystals instead of sugar.

I baked these rather late this evening in order to make the Tuesday posting deadline. They smelled so fantastic right out of the oven that my husband and I had a little after dinner biscuit break. mmmm, they were quite good piping hot from the oven. In my husband's words, "They're so light they could fly."
Posted by Nancy/n.o.e at 9:54 PM

Yes! They were light and they were delicous. And they are perfect any time.

Those look perfect, Nancy! I think I need to try the mix of AP and cake flour (to approximate your lower protein flour) next time to see if I can get a lighter texture.

Those biscuits are sky-high! I saw White Lily flour in my local Wegman's (we are only an hour from the Mason-Dixon line; maybe that's why) and I'll have to try it next time I make biscuits.

Your biscuits look amazing Nancy. I've learned so much from you these past few years with TWD.

Thank you for baking along with me!

Maybe that's my issue with biscuits - I've never ever made them with White Lily flour! I'm not sure I've ever even seen it in my local store, but I guess I haven't really been looking very hard. Yours really do look perfect!

I am coming over there to have you teach me how to make good biscuits. I just don't have the knack for making them look this spectacular! Nice job and great photo of them!