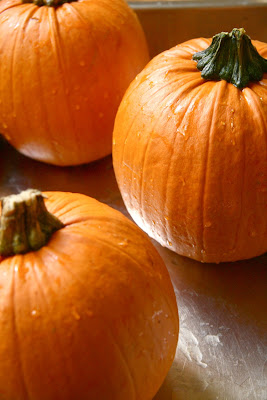 I make no secret of my love for All Things Pumpkin. I'll happily bake and cook with pumpkin on a year-round basis, but the cool, crisp and/or blustery weather of Autumn makes pumpkin recipes all the more appealing.

Most pumpkin dishes employ a sweet spiced flavor profile, such as my favorite pumpkin pie or my two favorite pumpkin bread recipes. When it comes to dinner selections, however, I prefer the savory ones. I have a pumpkin soup recipe that I love (which I have shared here in the past), but when I saw this recipe for a savory Roasted Pumpkin Soup with Cider Cream from Williams-Sonoma, I had to give it a try.

- You can find the soup recipe here. The recipe has several steps, but they can be done in stages. The pumpkin could be roasted days in advance, and the same with the reduced cider.

- Although the recipe directs cutting the whole pumpkins in quarters to roast, I roasted mine in halves, drizzled with olive oil and pepper. I added the salt later, because I thought it might draw the moisture out of the pumpkin as it roasted.

- I love that this recipe combines the flavors of sage and nutmeg.

- To finish the soup, the recipe has a lovely whipped cream flavored with concentrated cider. Rather than reducing a bunch of cider, I used boiled cider from King Arthur Flour, and the cream was perfectly flavored.

- I found that a half recipe made a big vat of soup. 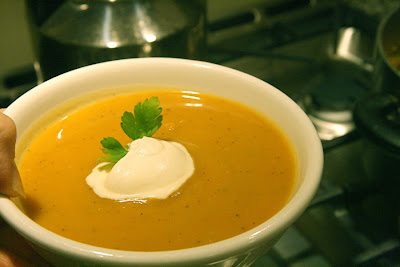 My husband, who is definitely not the pumpkin fan that I am, said when he tasted his soup, "This is perfection." Don't tell anyone, but I was actually a bit disappointed by his reaction, because it meant less leftover soup for me!
By itself, the soup by was very very good but adding the cider cream completely balanced the flavors. The cider cream was not really sweet per se but it added a smoothing, slightly fruity note to the herby savory mixture of vegetable flavors in the soup. I can't wait to make this recipe again!

I'm sending this wonderful soup to my buddy Phyl to add to his pumpkin dinner roundup.
Posted by Nancy/n.o.e at 6:06 PM

This soup sounds absolutely glorious. Can't wait to give it a try.

This looks so good! This is high on my list of recipes to try.

That looks so delicious, Nancy! I must try it.

Sounds like a perfect use for the boiled cider. I realized the other day that I've managed to use half my bottle (I've been adding it to homemade applesauce, among other things), so I ordered another one. =) I'm not a really big soup person, but this looks tasty.

Williams and Sonoma is just inundating us with amazing recipes these days! I have a pumpkin sitting on my porch waiting for it's moment to shine. It was destined for rice pidding but you never know.

Yes, I know full well your love of pumpkin!! I'm trying to revisit that issue for myself and this soup looks wonderful as I am a huge soup fan as you know. I also think I trust Jim a bit on these matters, Vanilla guy that he is and all, so might do a small batch of this in the next month, I'm sure Mark would like it!