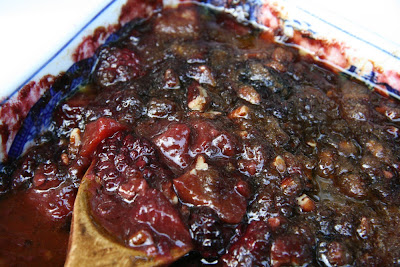 This week's recipe for the Tuesdays With Dorie baking group is called Tropical Crumble. The recipe's creator, the inimitable Dorie Greenspan, says, "think of this in the dead of winter, when a taste of the tropics can be as warming as a cashmere throw." For Gaye of Laws of the Kitchen who chose this crumble, this was indeed a taste of the tropics during the wintertime - she's in Australia where the seasons are the opposite of what I'm experiencing here in the US.

As for me, I don't have a huge incentive to experience the tropics at the moment; our temperatures have been sky-high for weeks, with humidity to match. Through the wonders of global trade I can definitely buy mangoes and bananas here year-round, but I turned instead to the plenitude of summer fruit that was filling my fridge and freezer. I had some ripce local peaches from my farm box, and a few weeks back when I was overrun with blackberries I'd tossed them in the freezer for future baking projects. Peaches and blackberries sounded like a winning seasonal combination to me.

While the "not so tropical" part was intentional, in the course of baking this recipe I had an unintended crumble fail. In the end, my dessert didn't bear a very close resemblance to the way I imagine this recipe was supposed to turn out.

- As I was preparing to bake the crumble, my 1st question was how much fruit to use, seeing as I was using completely different fruit. So I put the issue out on twitter: "I need to figure out how many cups of fruit is the equivalent to two mangoes and four bananas. any guesses?" In a matter of minutes, I had a response. From none other than Nancie McDermott, who wrote the book on pies - literally - so if anyone knows her fruit, it's Nancie! And although she is a fellow Southerner (living in North Carolina), the cool thing is that she was traveling in Taiwan when she replied to my question! Her reply: "3 cups." Great! I had a plan.

- I had a fair amount of ripe peaches to use, and by the time it was all said and done, I probably used close to 4 cups of peaches and blackberries. Trying to approximate Dorie's instructions, first I cooked the peaches about 5 minutes on high and added the frozen blackberries for 2 additional minutes. I added a pinch of salt to Dorie's filling ingredients, and rather than a fresh lime, I used about 1/4 teaspoon of lime zest from my freezer. I refrigerated the cooked fruit mixture overnight.

- The topping recipe calls for 8 T butter to 1/2c brown sugar to 3T flour to 1/2c nuts. I didn't stop to think about that proportion, just measured and combined the ingredients and popped it into the freezer overnight. Looking back at it, that's a lot of butter for a relatively small amount of dry ingredients.

- The following day, I brought the fruit to room temperature, sprinkled on the frozen crumble topping and put it in the oven to bake.

- I'm pretty sure I measured my ingredients correctly. But as the dish was baking, the topping never became crumbly; in fact, it never became topping. It was just big pool of melted butter with some clumps of sugar and pecans discernible among the fruit.

When I went to serve the "crumble" I spooned off as much of the pooled butter as I could, then put it in a bowl with some vanilla ice cream. My husband loved "the compote" and I agreed that it had good flavor. The lime and ginger paired beautifully with the peaches and blackberries, and the crunch from the pecans was lovely. Although it was a crumble #fail, it was at least a tasty flop!

Sometime I'd like to try this recipe as Dorie wrote it, with the bananas and mangoes, but before I did, I'd have to check the proportions of butter to dry ingredients so that it would be a true crumble rather than a buttery mess. I will be interested to see how this recipe worked for everyone else who baked this week.

Peaches and blackberries sound delicious together! I'm also a Georgia girl in Atlanta, so I know exactly what you mean by the high temps and high humidity!

It's so frustrating when things don't work out. I have to agree, that sounds like a lot of butter for the amount of flour. At least it tasted good! =)

great save with the recipe. looks good anyhow!

I was wary of the mango/banana combo so I sat out this week, but your fruit combo is right up my alley! Bummer about the flop but at least it was tasty :) Based on the other blogs I've visited so far it seems a lot of people had trouble with this one.

There seems to be common ground that there is too much butter in the topping. However, glad it tasted great anyway - love the purple colour from the plums. Thanks for baking with me this week.

I think cooking the fruits with the brown sugar is what made this great, so I am sure your combination was good. My crumble sort of melted into the fruits, but it tasted good.

pretty much the same happened to my crumble topping, but you are right...it did make a tasty fruit mush!

Definitely halve the butter next time, my topping was fine with double flour. I thought this was a good one and will probably make it again in winter when tropical fruit and apples are the only decent fruit options.

I think the pool of butter was kind of gross :( I forgot about that when writing up my post. I think less butter is a good idea. thanks so much for the tip about subbing in oats for the crumble instead of nuts - I'll have to remember that next time!

I love the fruit and extras you used with this one. I'm sorry it was a fail but maybe with a new crumble topping it would be everything you hoped?