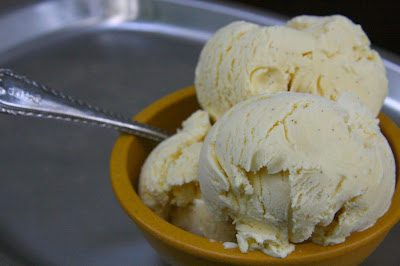 This weekend the Berkeley, California restaurant Chez Panisse is celebrating the 40th anniversary of when it served its first meal. Far from being any ordinary restaurant, Chez Panisse, under the direction of its founder Alice Waters, was the standard bearer for fresh, local, and organic food, back at a time when those were exotic concepts.

Although I certainly cannot celebrate in person, I'm having a little virtual anniversary celebration right here on my blog, featuring a Vanilla Ice Cream recipe from an old cookbook in my collection, Chez Panisse Desserts. I have the 1985 hardcover edition of the book, but it's available in softcover. I've included the recipe, below.

- While I won't say I exactly changed the recipe, I made a few minor enhancements to boost the vanilla flavor. First, I used vanilla sugar for part of the sugar in the recipe. Vanilla sugar is about the easiest thing in the world to make: when you scrape the seeds out of vanilla pods, just rinse if necessary, then dry on the counter before popping them into a jar of regular sugar. The pods will infuse the sugar with a lovely flavor of vanilla.

- In addition to the recipe's directions to use vanilla seeds and infuse the custard with the pod, and my addition of vanilla sugar, I also added about 3/4 tsp of vanilla extract before churning. I learned that trick from David Lebovitz. His view is that several types of vanilla, especially extract with its alcohol base, give various experiences of the flavor: "Remarkably, alcohol also changes the way your senses ‘taste’ flavors, so I add a bit of vanilla extract to recipes even if I’ve infused them with vanilla beans."

- Incidentally, Lebovitz has a close connection with Chez Panisse. He worked in the kitchen there for 13 years, beginning as a line cook and ending up as the pastry chef, before leaving in 1999. Lebovitz is attending the 40th anniversary festivities this weekend, and has written a charming post about Chez Panisse.

- I also added a tiny pinch of salt.

This was the creamiest, most intensely vanilla-ish vanilla ice cream I've ever made. It had great texture and flavor, and held up well in the freezer.

1. Split the vanilla bean and scrape the seeds into the sugar, rubbing the mixture between your fingers until the sugar is fragrant.

2. Add the vanilla, sugar, vanilla pod, half and half, or milk and all the cream to a sauce pan. Warm the mixture, stirring, until the sugar dissolves.

4. Pour all back into the sauce pan and heat over medium-low heat, stirring, until the mixture thickens slightly into a custard and coats the back of the spoon.

5. Strain the custard into a storage container, add back the pod to the custard, and chill in the fridge until cold.

6. Add the vanilla extract, remove the vanilla pod, and freeze in an ice cream maker.
Posted by Nancy/n.o.e at 9:54 PM

I'm sure J was thrilled with this one. =) I like to make vanilla ice cream with both bean and extract. And I add a bit of salt to lots of things that don't call for it. Your ice cream looks really yummy!

Forty years, it's so hard to fathom it has been that long. One of my creams is to visit Chez Panisse.

Finally...something other than chocolate over here...just kidding. Looks great...I could eat that entire bowlful in one sitting. Yep, I could. Must try.

I'd love to try this one - it looks so voluptuous.

I was lucky enough to eat at Chez Panisse (well, the cafe part, anyway) 10 years ago and still remember the meal. Amazing. At the time, I was living in a town where Lindsay Shere had opened up a bakery - boy, was I spoiled!

I've been craving vanilla ice cream in a major way lately but haven't had the room for the ice cream canister in my freezer. We lost some food due to the hurricane, but on the plus side, I can finally make ice cream - can't wait!