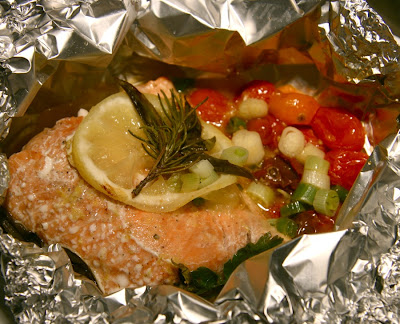 One by-product of habitual cooking from new recipes is a certain confidence in the ability to predict in advance, from a quick perusal, how the recipe will taste. Granted there are times when unusual ingredients are paired together and the only solution is to prepare the dish and see how it tastes. But the real fun comes when a recipe with seemingly ordinary ingredients, simply combined, produces a result that is startling in its resulting unexpected flavors. Such was the case with this week's French Fridays With Dorie selection, Salmon en Papillote.

- The recipe, from Dorie Greenspan's Around My French Table, has just a few ingredients - salmon, tomatoes, basil, lemons, herbs (I used rosemary), scallions. Dorie shared the recipe on her blog, here.

- "en papillote" means in paper, and packets are often made of baking parchment. But, as Dorie explains, foil works just as well, and is actually easier to use. For company, however, nothing beats cutting into a paper packet and seeing the steam rise and catching a glimpse of the savory goodness within. 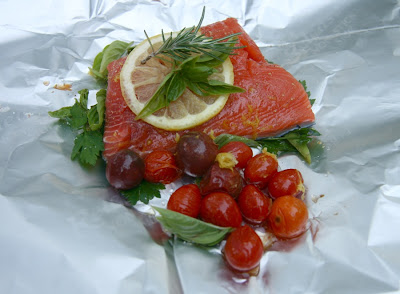 - My garden produced rather anemic basil. The leaves were small and I didn't have quite enough, so I filled in with Italian parsley.

We were surprised - pleasantly! - at how well this recipe turned out. The ingredients worked together inside the sealed packets to produce a rich and savory broth, the kind that you want to lick off the place when the salmon is all gone.
Posted by Nancy/n.o.e at 4:47 PM

Glad you enjoyed! It's always a bonus when something so easy is also so good...

Looks great! Love this method of cooking...when I learned it in Whisk I knew I would be using it regularly and I do. Always good for fish especially. I was really happy to see this recipe this week...can you tell, I posted the right recipe on the right day at FFwD, a rarity indeed.

Dorie Greenspan is my mentor.

So pretty! I love how colorful the ingredients look in the packet, especially in the before shot. My copy of AMFT has not been used nearly enough.

This was a perfect recipe for summer - easy both in the execution and the clean up. And, it's delicious and pretty to boot!

What a beautiful slice of salmon. Good fish = great eating. I bet yours was wonderful.

I liked this one and will def do it again.