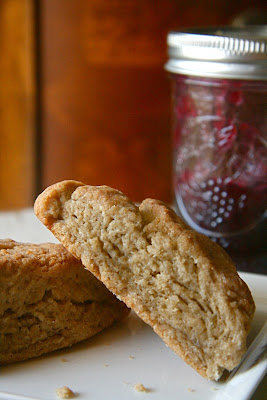 In the early days of the Tuesdays With Dorie baking group, I was paging through the book, and the Chestnut Scones caught my eye. I'd never heard of chestnut flour, and I was intrigued. Searching around, I located chestnut flour online, ordered it, then waited for the recipe to get chosen. It sounds like a great fall/winter recipe to me, but a few years of cold weather passed and I began to wonder if my flour would go bad before the recipe's turn would come.

Meanwhile I was finding other recipes that specified chestnut flour, so December 2010/January 2011 became the official Chestnut Flour Baked Goods Season in my kitchen. I baked Dorie's Chestnut Scones and two recipes from Alice Medrich: Chestnut Pound Cake and Chestnut Meringues. All of these yummy chestnut baked goods have been in my "Drafts" folder, waiting for the appropriate cool weather opportunity for me to post them.
We're getting down to the last 6 months of TWD - just a couple of dozen recipes remaining in Dorie Greenspan's book. Even so, I was a bit surprised that something chestnut was chosen for July. Then I saw that this week's hostess, Andrea, is from Australia, and it's winter down under, so she got to pick something seasonally appropriate, rather than her usual fate of (graciously) suffering through out of season selections made by the majority of the group members who live in the Northern Hemisphere. Although upon closer investigation I see that Andrea lives in tropical Darwin, Australia, so I'm thinking it isn't super cold where she is right now.

But, all considerations of seasonal appropriateness aside, I have to say, just looking back over my pictures and notes from 6 months ago, I wish I had a batch of chestnut scones cooling on my kitchen counter right now! Delicious scones know no season.
n.o.e.'s notes:

- The scones were selected by Andrea of Andrea in the Kitchen, and you can click over to her post to find the recipe.
- The recipe is quick and very straightforward to put together.
- When it came time to serve these scones, I put them with double devon cream (store-bought from a jar) and my daughter Allison's homemade muscadine jelly.
the verdict:
These scones were an immense hit with my book group. I had brought chocolate cookies also, and the cookies were pretty much were ignored while the scones were devoured!
The most common comment from the group members: "These aren't dry like scones so often are. how did you get them to stay moist?" Scones after scone quickly disappeared. The chestnut flour added a slightly sweet richness to the scones. They were quite tasty plain, and also good with any combination of the cream and the jelly.

If you ever find yourself with a supply of chestnut flour, I recommend these scones.
Posted by Nancy/n.o.e at 1:40 PM

You are too smart - getting that chestnut flour early on. I didn't think ahead and I searched and could not find any here so I skipped this week. will be using my new cuisinart ice cream maker for next week's sorbet tho. :)

I found chestnut flour but it was so expensive. I went with coconut flour which was great, but my scones were a little dry. I'll ad more liquid next time.

I loved these scones too. Now I am keen to try the chestnut pound cake and chestnut meringues!

Way to go on finding the CN flour! Im sure they were wonderful, they look great!

Those look yummy. I'm definitely putting chestnut flour on my list to make once I finally get my hands on some of the flour.

Nancy, you're so organized! I can't believe you ordered chestnut flour and made these months before they were chosen. The scones look lovely. A chestnut pound cake sounds good, too.