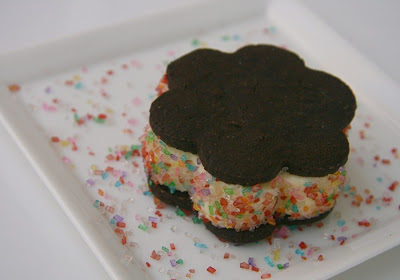 As is true every week, Tuesday is the day when I post baked goods from Dorie Greenspan's book Baking: From My Home to Yours as part of the Tuesdays With Dorie baking group. But this is no ordinary Tuesday, it's the third anniversary of the founding of TWD by Laurie of the blog Slush. The recipe this week is Midnight Crackles, which are chocolate cookies. I thought I'd do something special to celebrate TWD's birthday and made the cookies into ice cream sandwiches, with David Lebovitz's Cinnamon Ice Cream! I've never really made ice cream sandwiches, and found that it was a fun and fairly simple process.
n.o.e.'s notes:
- If you want to find the recipe for the cookies, click on this link from the Tuesdays With Dorie website.
- The cool thing about this group and this book is that the author, Dorie Greenspan, has a blog where she often discusses her recipes. In the past I've learned things such as that Dorie's Swedish Visiting Cake can be baked as an apple variation. For this week's recipe, Dorie had posted about making the Midnight Crackle Cookies as cut out cookies rather than drop cookies. I was intrigued, and decided to use that method to make fancy cookies for the TWD anniversary.

- Once I planned to make cut out cookies, I figured I should make some sort of sandwiches with them. I had some cinnamon ice cream in the freezer, from David Lebovitz's book The Perfect Scoop, and knew that would be a great combination with the chocolate cookies. You can find the recipe for the cinnamon ice cream here. The ice cream is made with cinnamon-stick-infused cream and it has a subtle depth of cinnamon flavor.
- The secret to making ice cream sandwiches that will last until a photo is taken is the freezer. Every stage and every element needs to spend time chilling, including the plate your will use. I froze the baked cookies while I softened the ice cream, spread out in a flat 3/4 inch thick patch on the lid of a leftover container and refroze it. After the ice cream had hardened, I cut it with the cookie cutter and placed it back in the freezer. Half and hour or so later, I removed the frozen plate, put a frozen cookie on it, put the shaped piece of ice cream on it, topped it all with another cookie, pressed just a bit, and voila!
- Yes, you read it correctly. I made one ice cream sandwich. The rest of the cookie dough I rolled out inside of a large zipper freezer bag and froze. The next time I need cookies, I can pull out the frozen dough, cut with cookie cutters and bake.

- To see the midnight crackle cookies as they were written, puffy with crackled tops, check out the posts of the other TWD bakers.
the verdict:

Some day I'll try the recipe as it was originally written and make crackly pillowy chocolate cookies, but this week I had fun trying the roll-out variation Dorie had suggested. I discovered a wonderfully versatile, easy, and delicious chocolate cut out cookie that was great for ice cream sandwiches and would also be good for decorating or sandwiching in a number of other ways.

Happy Anniversary to the Tuesdays With Dorie group! I've enjoyed every week that I've been a member.
Posted by Nancy/n.o.e at 6:26 PM

Nancy, these are wonderful! How creative and how festive for an anniversary party. I never even thought of rolling the dough and making cut cookies. guess I need to read Dorie's blog more often.

Trust you to go over the top with a simple cookie recipe. And YAY for that!!!

Very nice. So pretty and festive. You would NEVER get by with making ONE of anything around here...lol. These especially!

Yum ..love them! I would eat one right now!

You have such self control making JUST ONE ice cream sandwich...I am impressed..I hope you got to eat it!

So fancy! And just one cookie?! I'm impressed! I'm so pleased to bake along with you every week. You are a rock star!

that just made my tummy grumble and my mouth water!

That looks great, Nancy! I love the addition of the colored sugar. I haven't tried the cinnamon ice cream, but it sounds like I need to! =)

Nancy,
Libby and I think your sandwich is adorable. Very nicely done.
AmyRuth

Like you, I've never made sandwich ice creams before but they look seriously yummy!

Thanks for sharing your tips.

looks good! i'd read that post as well, and am glad to see someone tried it. based on the taste and texture of the "regular" crackles, i can tell they'd make great IC sandwiches.

Awesome variation! I don't suppose you could fedex me one?

I love your variation Nancy - that is one fun, celebratory cookie treat! Thanks for the tip about cut-out cookies, I'm going to try that next time as this dough was pretty hard to shape into balls.