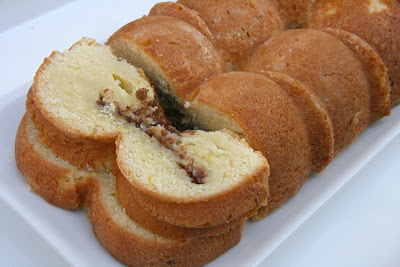 This week Dorie Greenspan made me feel old. In the headnotes for her Nutty, Chocolaty, Swirly Sour Cream Bundt Cake - this week's assignment for the Tuesdays With Dorie baking group - Dorie says:

"One of the nice things about having baked for so many yeears is being able to see sweets come into fashion, go out of fashion and come back again. That's the case with this sour cream cake. I saw it come into fashion in the 1970's..., fall out of favor and make a comeback recently."

Really? I clearly rememer this kind of cake and have baked it often throughout the years. In fact, I have a recipe for sour cream cake on a card in my metal recipe file box. Come to think of it that file box should make me feel old all by itself, I guess. But at any rate, I had no earthly idea that sour cream pound cake had become a dinosaur, or that anything so simple and good could go out of fashion.

- Jennifer of the blog Cooking for Comfort is responsible for choosing the bundt cake and you will find the recipe by clicking over to her blog.

- This cake was headed for the homeless shelter during Christmas week, on a platter with several different treats. I wanted the cake to have seasonal flavor so decided to emphasize the cinnamon. Here's how: I left out the dried fruit and the nuts in the swirl (both can be controversial in baked goods, and I wanted this to be of general appeal) and used cinnamon chips instead. So my swirl ingredients were 1/2 c brown sugar, 1/2 cup cinnamon chips and 2 tsp Vietnamese cinnamon.

- I baked a full recipe in a super-large decorative loaf pan that is equivalent in size to full bundt pan.

- Although the loaf pan I have is the same capacity as a bundt, it is much thicker (and shorter I guess, than a bundt would be if you stretched it out straight), so the cake takes a lot longer to bake. I'm pretty sure mine was a bit under-baked; in fact now that I look at the pictures again, I'm positive it was.

- Dorie says that it's fine if the batter doesn't close over the swirl when you put it in the pan. Now, I really hate to contradict Dorie, but you really do need to worry a little bit about covering up your swirl with cake batter. I was carefree about the whole issue and my batter didn't close up during baking. When I unmolded the cake and turned it right side up, all of the swirl fell out. I tried to stuff it back in but, really, there was no way it was going to stay there when the slices were served.

- I sliced the cake for the dessert platter and got a chance to taste the trimmed ends of the loaf. 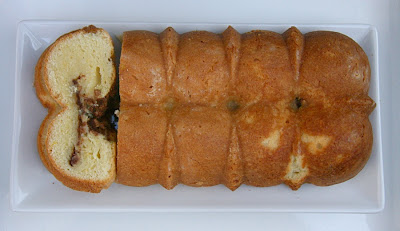 Although sour cream cakes are classic for a (good) reason, I can't say that I remember the sour cream poundcakes of yore being this moist and fabulous. But Dorie's version is perfection itself, and when a cake is this good, it should never, ever go out of fashion.
Posted by Nancy/n.o.e at 12:03 AM

That's a beautiful cake, Nancy! I agree with you, I had no idea people weren't still mad for these cakes. I never stopped baking them in all my adult years. I had a similar experience with the filling but I would make this without it just for the texture of the cake.

love your cake pan. it was a success here too! yours looks super moist and wonderfully textured.

Your cake looks very professional; I love the shape. I love sour cream cakes. I never really realized that cakes could have a 'fashion' trend too..

I must be out of style too because my mom has been making these cakes for/with me for 30 years without a break and we always love them. I agree, the sour cream made it extra delicious.

I may have to make it again with cinnamon chips. Sounds so good. And it turned out really pretty, Nancy!

My Gandma and my mom made this for us when we were little!! Love your cake!!

Hey, hey, hey, what do you know, no chocolate in this version...big surprise to me. Love this pan, what fun to have this one to play around with for this recipe. I want you to know, that Dorie was right on for my little cakes, the batter closed it all right up and I had a nice ribbon running through the cake. This was soooo goooood!!! Glad I decided to make it this morning.

Oh, wow. I -love- your idea of using cinnamon chips instead of chocolate ones; I wish I'd thought of that. Making note for next time. =)

I don't know where you find all these beautiful cake pans - this one is a stunner. And cinnamon chips (an ample supply of which I have in my pantry) - why didn't I think of that? I experienced the swirl leakage too - sigh.

I'm obsessed with your cake pan! So pretty! I love that you used cinnamon chips. I have a bag sitting in my pantry that I can't figure out what to do with... now I know! Thanks!

What a great idea to make this cake in that lovely pan! It looks scrumptious! I am sure everyone at the shelter liked it!

I love the cinnamon tip. But more than that, I love love love your pan. What a beautiful design on the cake. I love bundt cakes. I'm in a loving mood tonight I guess. But I don't love this winter and I am ready for some warm!

LOVE that bundt shape. How beautiful!

Thank you for baking along with me and for being an inspiration!

I love your decorative loaf pan!

oh, nancy, this is such a pretty cake. and i love the uber-cinnamon approach. delish!

This was a yummy cake. I like that pan!

You really do have the most amazing collection of pans Nancy! I'd love to rummage through your stash and see what else is hiding in there :) I liked this one a lot too, hopefully Shane's parents will also think it's a nice treat when they come back.

Wow, that pan bakes up an absolutely gorgeous cake! I think a cake this delicious should always be in style.

cool pan! it was really tricky to get that swirl covered.

LOVE the pan you used.

I agree on being careful with the swirl. Even in my mini bundts I had some trouble keeping the tops on because of the swirl.

I agree on the out of popularity. I have been making something like this all along.