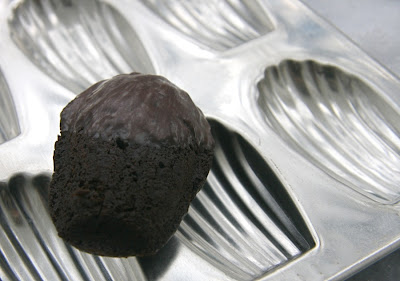 One of the treasured purchases I brought back from my afternoon of shopping for kitchenware at E Dehillerin and Mora in Paris this summer was a little madeleine pan. With just 6 molds, it met my requirements for pack-ability. I've never made madeleines, but I knew there were several madeleine recipes that would be coming up in Dorie Greenspan's book, Baking From My Home to Yours, and I wanted to meet the challenge with this pan!
The Tuesdays With Dorie group made traditional madeleines nearly 3 years ago; this week it was time for Fluff-Filled Chocolate Madeleines, Dorie's French-inspired approximation of a beloved American classic, the chocolate snack cake. 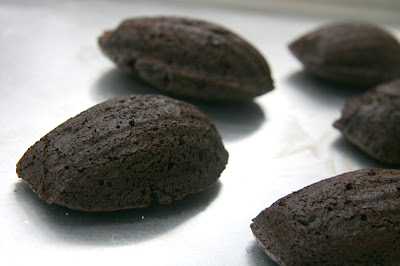 - Margot of the blog Effort To Deliciousness chose this week's recipe. Her blog is always a fabulous read because of the ingenious way that Margot rates the recipes that she makes, with an effort-to-deliciousness ratio, thus giving a ready answer to the age-old question, "is it worth the bother to make this?" Margo's madeleines are adorable, and you can find the recipe and step-by-step photos if you click over to her madeleine post.

- I made half a recipe, and there ended up being just a bit too much batter for my molds. When I was filling them it was hard to tell because my chilled batter was pretty much solid - like cookie dough. I had to scoop it into the molds. Luckily the molds did not overflow terribly as the madeleines baked, but they turned out a bit too large and a little odd in shape. There were pock marks from where bits of butter had melted as the batter baked. But regardless of their flaws my madeleines came out with lovely ridges!

- In spite of the fact that for many of my grade-school years I subsisted on fluffernutter sandwiches, or maybe because of it, I couldn't get behind the marshmallow fluff filling. If someone had handed me the requisite number of tablespoons and I didn't have to buy an entire jar, or better yet, if that same someone also offered to pipe it into the madeleines, that would have been fine. But that person did not appear in my kitchen, and so my madeleines didn't get filled.

- There was some extra Dorie ganache in the freezer, so that's what I used for dipping my madeleines.

My madeleines were not exactly light and tender; they had a sturdy, somewhat dense crumb. They tasted like little devil's food cakes, especially with the ganache icing. Although we enjoyed the madeleines well enough, there are too many other chocolate recipes I prefer so this isn't a recipe that I'm likely to repeat. Now that I've used my new madeleine pan, however, I'm excited to try making traditional madeleines! 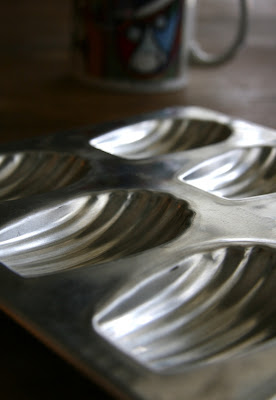 Love that you have a pan that will always remind you of Paris! They look yummy.

These look perfect! I love that you brought your pan home from Paris. Very fun!

Nancy, I'm glad you had an opportunity to use your lovely new pans. Your madeleines look divine. I am always hopeful that someone will appear in my kitchen to do tedious tasks like fill madeleines, but in this case you were just fine without filling because you couldn't get much in. Thanks for baking with me!

I have GOT to find a good madeleine pan. My rocks were tasty but ugly. And to get the pan in Paris oh là là !!