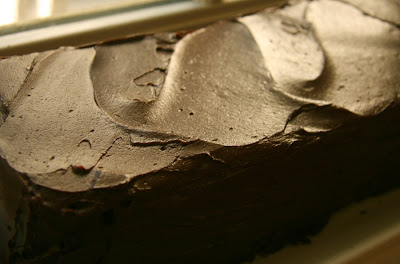 Sometimes the recipe names in Dorie Greenspan's book Baking: From My Home to Yours are perfectly straightforward (Molasses Spice Cookies, French Pear Tart, Sweet Cream Biscuits), and sometimes they are a bit more of a puzzlement. This week's Tuesdays With Dorie selection is a case in point: Dressy Chocolate Loaf Cake. Some of those words - "dressy" and "loaf cake" are not usually found together.

So this week's recipe presented a semantic mystery. Is the cake truly dressy as compared to all cakes? Or is it merely dressy as far as loaf cakes go? Only one way to find out - bake it up and see!

I decided to serve this one to my book group. As a collection of people they are remarkably versatile in the dressiness department. On any given evening most of us will be in jeans but at least one of the men will be in a suit and tie from working late. At times members have come from or been on the way to cocktail parties or fancy dinners. Our desserts have been similarly varied. We've sampled fancy tarts and rustic pies. I've run the gamut of my decorating experience (sort of dressy to very casual) in cakes I've baked for my book group.

No matter which type of "dressy" this week's cake would end up being, I knew it would fit in fine with our group. 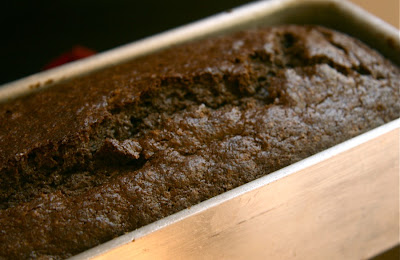 - Amy of Amy Ruth Bakes chose this cake for the TWD group to bake this week. You can find the recipe on her site.

- Instead of the loaf pan that Dorie specified, I used my long slim loaf pan, which has equivalent volume but different dimensions. As it baked, the cake rose a lot and filled the pan.

- When assembling this cake I was beset with misgivings. I'm not a huge fan of sour cream flavor, but I like it in some things. I was cautiously optimistic about the frosting. That is until I tasted it, and didn't really care for the flavor, at which point I got a bit worried.

- The other area of uncertainty was the filling. The recipe specifies splitting the loaf lengthwise and spreading raspberry jam between the layers. Despite what feels like a neverending supply of jam jars in my cupboards and fridge, I was unable to unearth any raspberry. Instead I chose a mild berry jam: cloudberry preserves from IKEA. 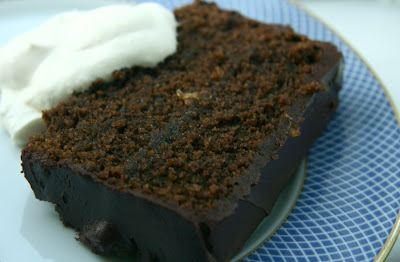 the verdict:
This was definitely dressy for a loaf cake, with its split, filled layers, and robe of frosting coating the top and sides. In the universe of cakes, however, it was fairly average in dressiness. But this cake was far above average in taste. The first bite brushed aside any lingering doubts I had about the various elements. This close-crumbed, moist, dark, chocolate-y cake paired beautifully with the jam filling and the sour cream frosting.

The book group agreed that this was a fine cake indeed. Perfectly dressy for a Thursday evening in summer!

Although I loved the combination of cake, jam and sour cream frosting just as it was, the cake also would be a great base for a variety of frostings. I had a few scraps of leftover cake with some peanut butter frosting and it was delicious.

I know this post is a few days late; I have been traveling and planned to write the post on Tuesday from the airplane. Except the plane didn't offer an internet connection.
Posted by Nancy/n.o.e at 6:43 PM

Looks great, Nancy! I especially like the top picture. I hope you had a great birthday and that you're enjoying your trip so far. =)

it looks wonderful! i used a mix of natural and dark cocoa powder and loved the darkness. such a great cake!

Looks so good! I had a small disaster with my first attempt at this recipe. I wasn't sure I was going to like this cake very much but I ended up loving it! :-)

I love your pictures !! It must have been wonderful with the special jam !!

No raspberry jam??? I was sure you would be able to come up with any of 50 different flavors or so. Funny, but the sub sounds great, too. Love your cake...it certainly looks very dressy the way you draped that frosting on it...very nice. I love the idea of you posting these TWD entries from all over the world.

It sounds so delicious I am ready to head to the kitchen despite the 29C weather.

I might make sour cream frosting again after your review (the first time I had quite a 'sour face')! The cake was wonderful I thought - even though Loaf and Dressy don't live on the same block - they're get along quite well! Glad your group gave it a good review - it looks wonderful from the long loaf pan!

Hahaha - I think you are right; this might be "dressy" in the chocolate loaf cake world, but that's about it. In fact I was kind of feeling some added pressure given the name, so I'm glad also you found it to be of only average dressiness in the larger cake universe. I had the exact same reaction that you did when I spoon-tasted the frosting, and I was also surprised and relieved when it tasted fabulous with the cake. But now peanut butter frosting - there's an idea! Your cake looks wonderful; glad it was a hit with your book group. (and I laughed out loud at your comment re: having no memory of making this cake! I think when you bake as much as we do they all start to blend together after a while . . .)

Nancy, I have to admit the sour cream w/melted chocolate kind of surprised my tastebuds too. Then when I tasted the combo, it made more sense. Yours looks pretty "dressy." I liked your comparison of the state of dressiness in your book club attendees. Cute!
Thanks so much for baking along this week. Guess I missed you earlier in the week so dropped back in for a visit. Thanks again.
AmyRuth

It looks lovely! I'm 100% a chocolate and sour cream lover, so this cake made me a happy camper :)

Look at that crack on your loaf. It looks perfect.