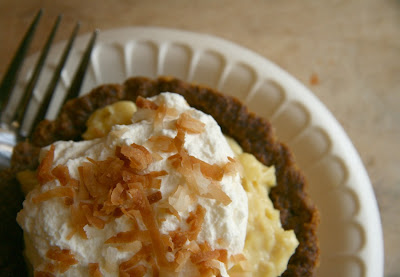 March is an unusual month for the Tuesday's With Dorie baking group. Out of the five recipes chosen, two are tarts and two are cookies. Two are coconut, and only one of the five is chocolate. So if you're looking for a chocolate post, odds are that you won't find it here on a Tuesday for a while!

Coconut Custard Tart is this week's recipe. This tart sounded insanely good to me (I've never been disappointed by a Dorie Greenspan tart recipe), so I was very excited to bake it and even more so when I realized that I had a perfect occasion. One of my dearest friends is a huge fan of coconut, and her birthday was last week. Perfect timing! I hinted to her that I was baking a treat for her and she implored me to make it either (a) small or (b) something that she could freeze in individual servings. Unfortunately, birthday or no, on our side of age 50 desserts tend to stick around as unwanted additions on the hips. The recipe didn't seem to be a good freezer candidate, so I made her some mini tarts. 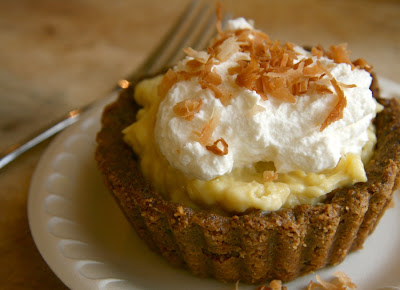 - Beryl of Cinemon Girl chose this week's recipe, and she will have the recipe on her post, or you can find it on pages 344 & 345 of Dorie Greenspan's book, Baking: From My Home to Yours.

- I made 1/3 recipe of the filling and the topping.

- My friend is gluten-intolerant, so I made my gluten-free nut tart crust. I baked one medium-sized crust that is now in the freezer, and several mini crusts to use for this recipe and for the next tart that's coming up in a couple of weeks. Nothing like killing two or three birds with one stone.

- I baked the custard precisely as written (except, of course, scaled to 1/3). For the topping, I decided I wanted it to be pure white, so I skipped the dark rum, and used a heaping measure of vanilla. I got a chance (finally) to try out the clear vanilla that I'd bought a while back. I wish I'd whipped the topping a few seconds less because mine headed past creamy on the way to lumpy. It tasted pretty wonderful, however. I rarely sweeten or flavor my whipped cream so this was a real treat.

I got to taste the recipe with bits of leftover crust, custard, and topping. It was very good, with a slight hint of rum. I thought the coconut was almost too subtle; the toasted coconut garnish on top provided a good boost to the tart's CQ (coconut quotient). The nut crust threatened to overpower the flavors of the tart, so next time I'd use a less assertive nut than walnut.

My friend was very excited about her two little tarts. So much so that I almost wished that I'd made her a full sized recipe. She sent me two emails about the tarts. The subject line of the second email: "Enjoyed my second pie tonight...so much for will power..." There is nothing more rewarding than baking for someone who loves the finished product!
Posted by Nancy/n.o.e at 12:07 AM

What a nice gift - these look beautiful - and gluten free as well! I'm sure your friend was thrilled to get them. Great idea to pre-make crusts and freeze. Those do come in handy!

I am going to have to try the gf crusts! What a great present to share with friends. That is one of my favorite things about baking- being able to make people happy!

Yours looks fantastic! I like the sprinkled coconut on top. I should've done that but went with chocolate shavings instead.

I sent a quarter of my tart to my in-laws and my MIL emailed me later to tell me how much she loved it, and if I needed to get rid of anymore, she would gladly help out! :) Yours look wonderful!

True. Funny how the flavor of the month is not chocolate, but coconut! LOL

Before I tell you how great your minis look (and how great you must look too, for never eating too much of anything! LOL) ...I must also mention that I made those in minis too... and froze them without trouble. They were amazing, even after the defrosting!

How sweet of you to share! Your tarts look so good.

I love it when TWD recipes are timed perfectly for an event. What a nice birthday treat! I agree that the coconut flavor was very subtle, but I didn't give the coconut much of a fighting chance once I infused allspice into the cream.

I love baking for others. It is always fun to see them enjoy (I hope) the goodies. Perfect B'day gift.

I used a previously frozen tart crust for my one mini tart. Handy things freezers!!!

Yum, sure would be nice to live closer to you so maybe I could get a sample of these things. I bet you already figured out that I wasn't too disappointed in the lack of chocolate this month. On the other hand, chocolate I can resist, the others might be more difficult. Your tarts look absolutely perfect and delicious.

So great that you were able to make this for your GF friend!! Your GF tart crust sounds great, even for those of us who don't have such dietary restrictions. Your tart is beautiful - glad it was a hit all around.

hooray! what a wonderful adaptation in order to share with a friend. my tart was a hit too:)

Knowing your friend loved it is the best reward! I skipped the whipped cream (another coping mechanism for those of us on the other side of 50). But now you have me wanting to invest the time in making some extra tart shells for the freezer.