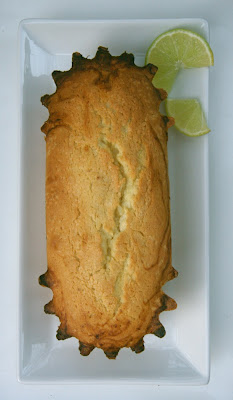 After nearly two years in the Tuesdays With Dorie baking group, I've learned that certain subjects are sure to generate strong opinions in the TWD baking community. Puddings, custards, and anything that could be described as "eggy" will cause about half the bakers to run away screaming. Ingredients sure to polarize public opinion include nuts, raisins and coconut. Yep, coconut, and in the month of March two out of the 5 chosen recipes featured coconut. The first was the Coconut Custard Tart and this week we baked the second coconut recipe: Coconut Tea Cake. I'm sure there were a few unhappy bakers, but the way I look at it, we're going to bake every recipe in the book at some point, so the coconut ones are bound to come up sooner or later.

Coconut used to be off limits for me (except in Mounds bars and macaroons, where I tolerated it), but, in the very recent past I've decided that I actually like coconut - as long as it's not in my savory foods (coconut curries are not my thing). In fact, tonight at dinner, I actually ordered a whole coconut, which came with the top cut off like a jack-o-lantern, and included a straw and a spoon. Yum!

- The tea cake recipe was chosen for us this week by Carmen of Carmen Cooks. She is a huge fan of coconut in every way, shape and form, so I'm happy for her that she got to choose a coconut recipe, even if it is a somewhat controversial choice. If you want to bake this cake, check out Carmen's blog, or turn to on pages 194 and 195 of the book Baking: From My Home to Yours by Dorie Greenspan.

- The coconut that I have on hand is unsweetened, and in gigantic flakes. I chopped them much smaller and left the coconut untoasted.

- The recipe calls for dark rum, and I made the optional lime variation. Coconut + lime + rum = delicious! (For lime/coconut cookies and a Sesame Street "Lime in the Coconut" video, click here.)

- I baked my cake in a loaf pan with fluted edges. The little flutes got a bit scorched in the oven, but most of the cake was fine. 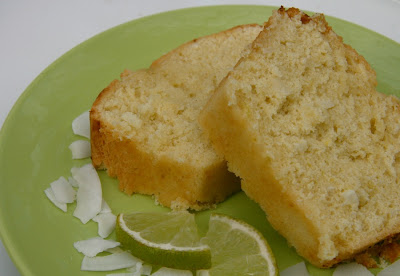 Dorie recommends toasting this tea cake after it sits on the counter for a few days. Any sweets recipe that we can legitimately call "breakfast," especially toasted (!), is automatically a contender for favored status in our kitchen.

The cake was very moist and looked like a pound cake in the pan and even while I was cutting it, which was quite exciting. Upon eating it, however, we realized that it was much less dense than a pound cake, quite fluffy really, considering how moist it was - an unusual combination. My husband liked this loaf a good deal, plain or toasted, especially with ice cream. I couldn't get the idea of a coconut pound cake out of my head, so sometime I'll have to try baking one!
Posted by Nancy/n.o.e at 8:59 PM

I"m glad your husband liked it!

Let us know how did your experiment with the coconut pound cake go!

Yours looks great. I love that pan, I wonder do the ends always get a little too brown. It's good that you have embraced coconut, this was a good recipe.

That is such a cute pan--I've never seen one like that! I loved this cake too, especially because it did not have a pound cake texture. Glad you liked it too, and good luck on your coconut cake journey! I am making another this weekend for my brother's birthday. Layer cake this time.

i love your fluted edges! i made a loaf too, and can't wait to try it toasted. maybe with a skiff of raspberry jam...

You always have the neatest pans Nancy - love this one! It sounds like the texture of our cakes was very similar. I enjoyed this one but I do wish the coconut flavor hadn't been quite so subtle.

I don't know what it is about coconut with some people. :) I love the stuff, and am slowly converting people as I bake on. This looks so cool - I LOVE that pan (being the pan-fetish individual that I am). Glad you and your husband gave it two coconuts up!

It looks delicious! I love anything coconut so this would be the perfect breakfast for me. ;-)

Your cake looks so good! The world seems to be divided by coconut lovers or haters. I love the stuff so this heaven was a slice of heaven for me!

You had me as soon as you mentioned coconut. Buting your coconut with a straw and the top cut off would be ideal.

Yours looks lovely! I fall firmly into the anti-coconut camp. My family liked this, though.

Your loaf looks delicious! I am definately making it with lime next time!

What a fun pan to bake your lovely loaf in! We love toast, too, but I took this one to work so we never got to enjoy it that way. I hope you do make a coconut pound cake, it's a delicious idea.

i was surprised by the fluffiness, too. that's a cool loaf pan, btw.

As a committed coconut lover, I can't wait to try this one. Your fluted loaf looks lovely. Now, where are you that you can order a fresh coconut at dinner??

Hooray for coconut converts! I made the mocha bundt this week because I was out of coconut milk. I love reading the posts for this cake because I'm getting some wonderful ideas. It's way better than P&Q!

okay, I love that first shot! lovely. that pan is adorable.

i'm glad you guys liked it.

I'm making it for Easter today. going for the lemon (and/or lime) version. Hope it turns out for me.

No toasting of it here as I made it into shortcakes...you know how the guys are about cakes around here...ehhhhh...so knew they would eat it with strawberries and whipped cream and it was great. I love the pan you baked this is, so interesting, unusual, and something very eye catching. Happy to hear it was a success.

Beautiful picture of the cake slices on the pretty green plate with the limes. This really was a nice cake. We didn't get around to trying to toasted, but I bet that was delicious. I'll be on the lookout for a future "coconut pound cake" post from you!