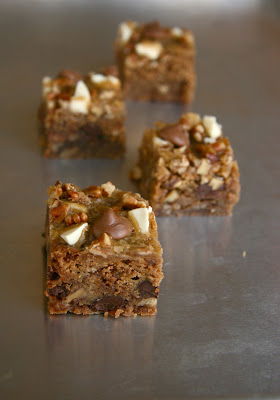 Earlier this month I saw some loaded blondie bars on Apartment Therapy's site the kitchn. They looked so enticing that I printed the recipe right away and baked the bars about a week later as one of my pre-Lenten treats.

- You can find the recipe here.

- I chopped up a Skor bar for toffee chips.

- In the topping I used a combination of white chocolate, bittersweet chocolate, and milk choc chips.

These blondies really are killer good. They have a very butterscotch/caramel flavor, and the stir-ins really add to the deliciousness. I think they'd work with any combination of chips/nuts or even coconut - whatever is your favorite ingredient. In fact, I'd bet that these would be delicious as just plain blondies without any nuts or chips at all.

The topping is very, very sweet (especially with the white chocolate). I found myself knocking the white chocolate off of the brownies as I ate them. The topping didn't stick to the base very well, but if it fell off I was just as happy. Actually, the blondies would be great without any topping, maybe better. They'd certainly be easier - and cheaper - to bake.

I will definitely bake these blondies again, experimenting a little bit next time. And maybe trying a different experiment the next time. And the time after...
Posted by Nancy/n.o.e at 10:19 PM

I don't like white chocolate either, so I appreciate your honesty about it.

I have got to try those - I having been craving a good blondie!

Great picture Nancy! These look terrific! I love recipes that allow you to adapt them to your tastes so easily.

If you'd like. I can bear the burden of eating all the white chocolate chips that "fall off" your blondie. But I may also eat the dark chocolate ones as well. They look great!

What great-looking blondies! I made some last week which were.... well, blandies. Nothing to write home about. I like the dk. chocolate addition - spices up the "blonde"! I agree, I never buy white chocolate, but use vanilla chips in place of.... not the best substitution, but not as sweet, either.

I'll take a blondie over a brownie any day. These look awesome Nancy.

Wow, these just scream "Party!" I will give these a try as I do like white chocolate in limited amounts, we are just the opposite in our chocolate preferences. Thanks for the recipe, they sound delicioius.

I'm with you--I'd be knocking the white chocolate off, too. I have a blondie recipe that I love, but I don't think I've ever blogged it. Might have to remedy that. And try these as well--they look delicious!

I've been craving blondies and this post isn't helping! I've been wanting to try the MS browned butter blondies. They call for toffee chips, which I don't have but I do have a stash of Skor bars. Thanks for the great idea!