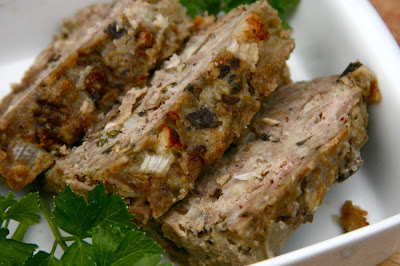 I've been having such a good time trying out new recipes that I tend to forget about some of our longtime favorites. But forgetting about a recipe as fabulous as this Wild Mushroom and Green Peppercorn Meatloaf would be a huge mistake! It is - bar none - the best meatloaf that I've ever eaten, and is no more difficult to put together than the basic run-of-the-mill stuff. One taste and you will realize that it is in a completely different league from the standard ketchup-topped loaf. Even if you usually don't like meatloaf, I'll bet you'd love this one. - This meatloaf has been part of my dinner repertory for so long that I've lost track of where I initially found the recipe. My hunch is the New York Times Magazine about 15 or so years ago, but it's really anybody's guess. For the recipe, scroll down to the end of this post.

- The original recipe called for ground beef. I've made it that way, and it is definitely tasty, but it's even better when made with a mixture of different ground meats. At various times I've used ground turkey, chicken, pork, veal, goat as well as beef. My usual blend is beef, pork and turkey (the regular not the white meat turkey), although I'm pretty sure I've made it with all turkey.

- Most often I make my own "fresh" breadcrumbs - stale bread pulsed in the food processor - but I've also used breadcrumbs that I toast and keep in the freezer.

- The dried green peppercorns are much better for this recipe than the ones that come in a jar of brine. They are the secret ingredient that makes this meatloaf so special.

- I usually buy a package of fresh mixed wild mushrooms in the produce department, but I've also chosen my own assortment of mushrooms. I've never tried reconstituted dried mushrooms, but I'm sure they would work. The mushrooms really boost the umami factor of this meatloaf.

- The recipe can be made in one large loaf pan, or in a few smaller ones. It freezers beautifully. I've served it to family and company alike. 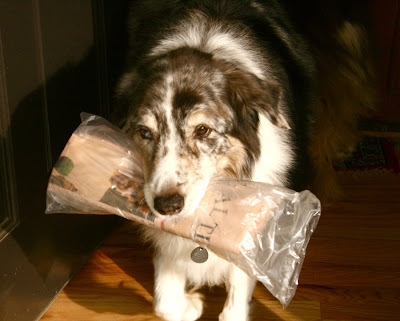 Although this meatloaf is one of my top 5 favorite dinners, it was perhaps loved best by our Australian Shepherd, Sputnik, who was my first dog - first pet actually. We lost Sputnik in December, just a few days shy of his 13th birthday on Christmas. As a puppy, he was a feisty handful, but with a bit (well, a lot really) of hard work on the training front he turned into an amazing companion.

Sputnik's greatest joys in life were: bringing in the newspaper (for a treat), picking up things to hand to us when we dropped them (also for a reward), and licking any plate or cooking pot we were willing to give him. His favorite food was this peppercorn meatloaf; the first time my husband gave him a serving of it, he just closed his eyes and inhaled, smelling the fantastic aroma before he could bring himself to taste any.

I can think of no better tribute to Sputnik than that written by a former landlady of my husband's about her beloved English Bulldog, Winston:

"Born a dog, died a gentleman."

That, and remembering him every time we enjoy this meatloaf. 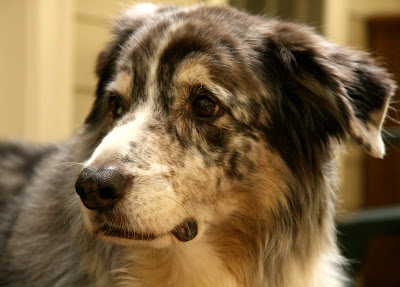 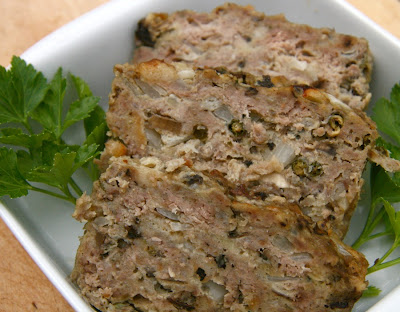 That meatloaf looks incredible--going to have to try it for sure as I love everything in it. Sputnik sounds like a wonderful member of your family--so great you had him as a companion for all those years.

I am so sorry you lost your baby and companion, Sputnik. It is good you had so many great years together. You were lucky to have each other.
Take care,
xoxooxoxox

It sounds like Sputnik had excellent taste in food. That meatloaf sounds delicious, and I'm intrigued by the green peppercorns.

What a lovely post and a wonderful tribute to Sputnik. It made me tear up as I was reading it. I think that the quote is perfect, Sputnik looks like a true gentleman.

Sputnik was obviously a well loved member of the family.Have this delicious meatloaf often:D

Hi Nancy you are great and this meatloaf is fantastic...a kiss...Luciana

Well, the meatloaf sounds interesting and delicious with lots of my fav ingredients. Will try. The guys would willingly eat meatloaf once a week here. Such cute photos of Sputnik. Darling little guy, don't make me cry anymore than I have about it.

Oh I'm so sorry you lost your friend and on Christmas too! They do add so much to our lives, don't they? They always know the right things to do when we're feeling bad or happy!! I know you must miss him terribly. Hugs!

What a great post Nancy. Sputnik is a gorgeous dog. The meatloaf looks very tasty! I've only ever made the more typical type but this would certainly be a nice change.

just catching up on my blog reading...and though i don't eat meat of any kind anymore, I was drawn to this post because of sputnik. what a special dog. i'm glad you have a culinary way to remember him:)