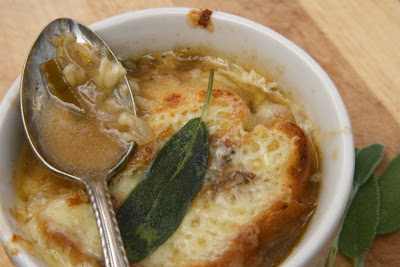 February 4 is National Homemade Soup day, and I can think of no better way to celebrate than with a hot bowl of English Onion Soup with Sage and Cheddar.

- I found the recipe here on Jamie Oliver's website, and mentioned it to my cooking friends on Twitter. Before I knew it, half a dozen of us decided to make the soup. Leslie of Lethally Delicious made this soup first, and reported that hers was bland, so I worked extra hard to develop maximum flavor at every stage of the soup.

- It is very important to measure your onions by weight for this recipe; no volume measurements are provided, and the size of onions varies wildly. I used 1000g of a mixture of five different types of onions: white onions, red onions, shallots (regular), leeks, and baby Vidalias. 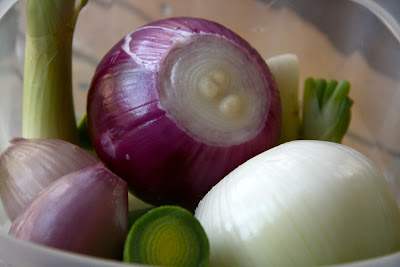 - Oliver stresses that the onions should be cooked on low temperature to bring out their sweetness. I chose med/low, and my onions took a lot longer to cook that the recipe recommends. I wanted to make sure that the liquid evaporated off and they got caramelized, so I think my onions cooked about 80 minutes or so.

- I made sure to season at every stage with salt and pepper.

- Oliver allows a choice of which type of stock to use for the soup's base. I had just prepared some turkey and chicken stock from Ruhlman's overnight method, so that's what I used.

- My bread was from a homemade loaf of Bread Baker's Apprentice Italian Bread.

- Some lovely sharp 10 year aged cheddar finished off the soup.

- I ended up with about 2.5 quarts of soup. One quart went directly into the freezer for a rainy day. 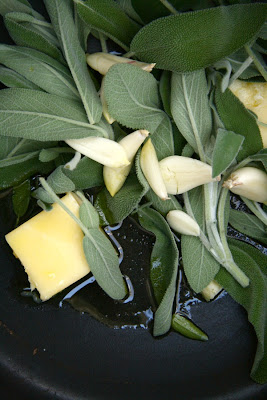 I absolutely loved this soup, and surprisingly, so did my husband. He has never liked French onion soup, so I served this to him with a bit of trepidation. It was different from French onion soup, which to me tends to be mostly about the beef broth and the melted gruyere. This soup was packed with onions, and there was a plethora of different onion flavors which were complemented by the woodsy sage and the sharp cheddar. I really liked the poultry stock as a base for this, and would definitely make it the same next time.
Posted by Nancy/n.o.e at 4:30 PM

this was a great soup. Glad you found it for us to make. It was delicious.

I made this soup a while back and I absolutely LOVED it! Your post reminds me I need to get moving on making it once again as it is such a comforting soup. Your photo makes it all the more inviting!

I will attest: this is one great soup...patience with the onions pays off with soup that will last days and days and freezes well. I also used the Italian bread as we had gone through our French bread by that point...hard to keep bread around here with the guys loving to make sandwiches all hours of the day and night. Thanks for putting this soup out there for us, we loved, loved, loved it! Great photo...looks exactly like my soup and bread did. YUM.

How did I not know it was Homemade Soup Day?! This soup sounds delicious. You know I love sage and cheddar!

I just took notice of this recipe while thumbing through my copy of Jamie at Home. I bookmarked this recipe because it sounded delicious. I'm so glad to see that you enjoyed it:D

This soup looks exquisite. I have not done JO. But so many of my blogger friends are dong this ..and they all look sooo good..that I have to give this guy a try :)

Ooooh, I'm so glad you posted this Nancy! It look fabulous and seeing your write up is just the kick in the pants I need to finally try this recipe out. I have a ton of onions on hand so maybe this weekend I'll tackle it. Thanks for all the tips!

Ciao Nancy ! I love your soup ! I love Jamie Oliver a lot for his special way of cooking ! We should have a JO group !!!

I have made this soup before and we absolutely loved it too.
Now you have made me want it all over again!

Your soup sounds perfect for a day like today!!!!

This is awesome! I actually just made some French onion soup the other night as well, but I certainly didn't add any sage. I'm bookmarking this!

And I wanted to share this recipe with you, since I think I remember you have some gluten-free diners in your family.
http://havecakewilltravel.com/2009/02/26/chickpea-blondies/

Your note on my blog made me just cry. Thank you so much, Nancy. I cannot tell you how much it meant to me.

This soup sounds so good! I have the hardest time with onion soup--I love the flavor, but can't stand the texture of cooked onions (though I don't mind leeks). Do you think it would work if I pureed the soup?

I love French Onion Soup, but have only made it once because I cried so much from chopping onions. This one definitely sounds like it is worth it, though. Thanks for the tips on developing flavor.

I made this yesterday but have not eaten it yet. It certainly smelled delicious simmering! My onions took way longer than the recipe called for as well, and I probably could have let them cook longer. We'll see - this will be lunch tomorrow. What a cool recipe - so different from French onion (I completely agree with your characterization of the differences!) Your soup looks great - glad you all enjoyed it! Thanks for sharing the recipe. (oh, I measured my onions - I think you said you were interested in those #s - I tweeted them yesterday if you are curious!)

This looks absolutely phenomenal, Nancy. What a picture, too!