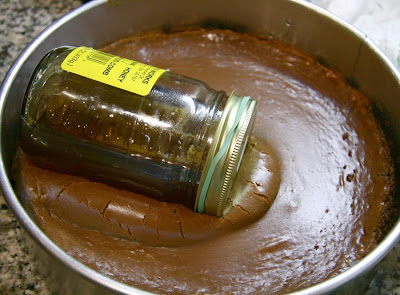 This week the assigned recipe for the Tuesdays with Dorie baking group, the Low and Lush Chocolate Cheesecake became the "Oh, NO! It's Smushed Cheesecake" (see? it rhymes with the original name!) in my kitchen. Luckily, however, despite a deep crater in the cheesecake, nobody was deterred from wanting it for dessert at Christmas dinner.

- The cheesecake was chosen by Tealady (Margaret) of Tea and Scones. Margaret is a fun and gracious baker who features lots of delicious food on her blog. Stop by to see all the fabulous things she's cooking up. The cheesecake recipe will be on her blog, or you can find it on page 243 of Dorie Greenspan's book, Baking: From My Home to Yours.

- I made a chocolate crust for the cheesecake from homemade chocolate wafer cookies. This was the brilliant idea of my baking buddy Di, of Di's Kitchen Notebook. We baked Alice Medrich's Cocoa Wafers the same day, and compared baking notes via Twitter (you can find the recipe for the Cocoa Wafers here). I used about 20 of the wafers for the crust, grinding them in two batches in my mini food processor. I made a mistake reading the sugar measurement and ended up with about 3 times too much sugar in the crust.

- Dorie promises that this cheesecake is simple to make. Although there were several steps involved in preparing the cheesecake and plenty of dirty dishes generated -- small food processor to make the cookie crumbs for the crust (pre-crushed cookies would have saved that step), large food processor for mixing the filling, bowl for melting chocolate, bowl for mixing crust, springform pan for baking the cheesecake, a pan to put under the springform pan to catch any leaks -- there is NO WATER BATH, so it is automatically easy in my book.

- Despite the fact that I rapped the food processor bowl like a fiend on my counter top, there were still bubbles in my cheesecake.

- Before baking, the filling did not taste - or look - very deeply chocolate-y.

- I baked the cheesecake for 35 minutes, which may have been over-baked. Cracks were just beginning to form on the top and the center was no longer jiggly.

- The center was lower than the outside, which had puffed. But as it cooled, the cake became perfectly level.... at least for a little while. Then followed a bizarre series of events that began with bland-tasting chicken breasts, continued with a fire in my microwave, and concluded with a 1 pound jar of honey (complete with honeycomb) falling out of a cabinet directly into my cooling cheesecake.

My brother and sister-in-law were hosting Christmas dinner this year. On Christmas Eve I informed them of the unfortunate mushed fate of the cheesecake, and told them that I'd bring a plate of assorted Christmas cookies. My brother look at me incredulously and said, "Are you kidding? I want that cheesecake!" "Who cares what it looks like?" added my sister-in-law. 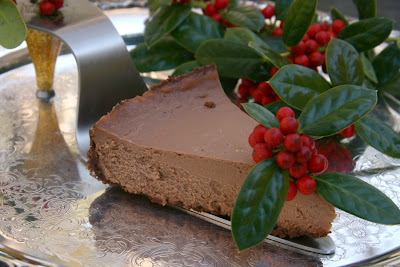 A little camouflaging holly and a high-heeled cake server really helped dress up the smushed cheesecake!

Thanks, Margaret, for making such a great baking choice for Christmas week. My extended family was very pleased with this dessert!
Posted by Nancy/n.o.e at 3:59 PM

I love the way you dressed up the cheesecake for the photo. No one would have ever known it was smushed!

Your cheesecake looks wonderful, despite the 'jar' incident. Could have been worse (I am remembering an episode of 'Friends')

Oh, no! Glad that it was still delicious, even after the honey incident. =) I might finally get my cheesecake baked tonight... but at least now my in-laws are here to help eat it! And we'll have to bake something else together soon.

I'm sorry that I'm laughing at your mishap. But it's a really unexpected photo to find.
Your "save" photo is lovely and filled with Christmas feeling.
Happy New Year!

Lovely! So nice and creamy. Love the no water bath and the smush shot!

OMW, how did that jar of hony get in that cake? LOL LOL LOL You always crack me up with your adventures in the kitchen. The thing looks really nice despite the mishap.

I couldn't help myself - that first picture just looks so funny! I wish I had done a chocolate crust, because it seems like the cheesecake itself just wasn't very chocolatey.

I must apologize up front because I laughed when I saw the picture, then again as I read the blog. Would love to hear about the fire in the microwave. :) Your cheesecake looks fabulous all plated up.

Honey and chocolate - Nancy, I think you're on to something! Well, it LOOKS very chocolatey, but the recipe could use some more IMO... outside of the fire engines and falling debris, it looks stunning - and look at this way, there were no earthquakes running through your cake!

Great save! It looks de-lish and beautiful!
Happy New Year!

AAHHHH! I think I would have cried if a jar fell into my cake!

But you, of course, pulled it off with perfect aplomb - and I congratulate you.

oh wow...that honey jar! so perfectly cushioned in the cheesecake! i'm glad you salvaged the dessert, and it does my heart good to know that your family wanted it despite its misfortune:)

i like the idea of a chocolate crust--i think it would nicely amplify the chocolate flavor. (and, who doesn't love munching on chocolate wafer cookies in the meantime?!?)

That almost happened to me! I got lucky and caught the spice jar that came tumbling out of the cabinet. I'm glad it worked out! I ended up topping mine with ganache since I ruined the pretty top with all my graham cracker crumbs LOL!

Smushed cheesecake is still better than no cheesecake at all! Looks great, Nancy.

Well, I'm sure it wasn't funny at the time...but it reads funny! The cheesecake looks elegant even with a jar of honey on top. And I think a chocolate crumb crust (with homemade wafers no less!) would have been perfect with this cheesecake. Nice job!

Yikes! What a traumatic evening, but at least it was all worthwhile. I'll never forget when my full lunch tote bag fell on my dacquoise. Nobody seemed to care...guess they agree with your SIL! I hope your microwave survived the fire!

Gorgeous--even with the jar of honey in it! ;-) Hope you had wonderful holidays.

Oh no! (I've done the same thing!) Glad it all worked out in the end.

Ciao Nancy ! I'm sorry about the damage your cheesecake suffered !! But I'm glad it was so much liked anyway !! I'd love to try your crust because I agree it needed a boost ! I hope you will have a wonderful new year !!

Yes and next time, cool the cheesecake away from falling objects! Glad your family enjoyed

I don't deal well with accidents so I would not have handled a jar in my cheesecake as gracefully as you did. Might I add that you covered it up beautifully- I would never have known! My cheesecake was full of bubbles too, glad I wasn't the only one. I didn't have high hopes for this one but I wound up liking it quite a bit!

OH NO! At least everyone still enjoyed dessert. How did a fire start in your microwave?!