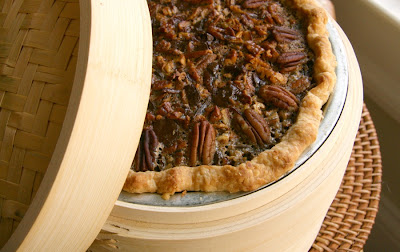 The Tuesdays with Dorie recipe chosen for this week is Dorie Greenspan's My Favorite Pecan Pie. It is a classic pecan pie, with a twist: Dorie adds chopped chocolate to the pie filling. The December recipe assignments were announced before Thanksgiving, which was great because that holiday is all about the pies. (Well, and turkey too, of course.)

Even though pecan pie is traditional at our Thanksgiving table, I dragged my feet about making this recipe. It used to be that I was philosophically opposed to adding chocolate to my pecan pie. I mean, a good pecan pie is perfection all by itself, I had a wonderful recipe with maple syrup rather than light corn syrup, and I saw no need to add chocolate. But then last year I baked a Texas Chocolate and Pecan Pie (from Bon Appetit) for my brother's Thanksgiving dinner (posted here), and it was absolutely delicious. So, grudgingly, I'm no longer hostile to the idea of chocolate in pecan pie. But still I debated whether to bake this one or not because it is nearly identical to the Texas pie, which I'd baked and posted a year ago. I was in the mood for my regular pecan pie. Or this Virginia Willis pecan pie recipe. Or the Pecan Maple Pie from the Tartine baking book. Although in theory I could bake a pecan pie any old time, the reality is that I will only bake one for Thanksgiving.

Enough whining. In the end I settled myself down and baked Dorie's Favorite pecan pie. I've never missed baking the weekly recipe for TWD since I joined the group in July 2008, and I wasn't willing to make an exception, even for a pie that was nearly the same as one I've already baked. We loved it last year, so I figured we'd love it this year! 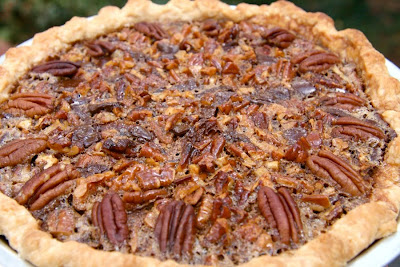 - The major difference is that the chopped chocolate melted in the that recipe, but is stirred into the pie filling unmelted in Dorie's recipe.

- I followed the recipe nearly exactly, except for substituting golden syrup for the corn syrup. Inspired by Virginia Willis recipe (linked above), I increased the pecans by 50%.

- For a crust I used the Cook's Illustrated Vodka Crust (which I posted here). When I blind baked the crust, it sagged, so I decided to make just 2/3 recipe of the filling. I didn't think a full recipe would fit, especially with the extra pecans.

- I might have overbaked the pie. In fact, I'm pretty sure that I did. There was a lot going on in my kitchen on Thanksgiving.

- Because I was transporting three pies (and about 7 other dishes) to my brother's house for Thanksgiving dinner, and the capacity on my pie carrier is one pie, I was very excited to read a tip about carrying pies in the compartments of a 10" bamboo steamer. What a brilliant idea, I thought, and grabbed a steamer at the store. Fortunately I tested out my pie pans in the steamer in advance of the pie-baking session. It turns out that a standard pyrex glass pie plate is too wide to fit in the steamer. My favorite pie plates are smallish-but-deepish metal ones from a pie shop in Connecticut (you could keep the pie plate when you bought a pie, or you could get some money back if you returned the pan to the store). These pans just barely fit in the steamer, and only if the crust wouldn't overhang the edge of the pan at all. A double crusted pie wouldn't have fit, even in that smaller pan. 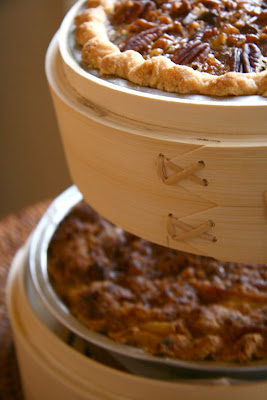 - If you use a bamboo steamer for a pie carrier, I'd recommend folding a dish towel and placing it in the steamer underneath the pan, which will make the pie much easier to remove from the steamer. Too thick a towel, however, and the pie will be too tall for the steamer lid to fit over it.

I'll be honest here. I had a sliver of this pie on Thanksgiving, and, while it went down easy, and seemed tasty enough, I couldn't give it full evaluative attention at the end of a wonderful meal of all new recipes, so I can't render a fair verdict. Luckily I have a report from another taster. My sister-in-law loves chocolate pecan pie, and thought this pie was absolutely delicious. I gave her the entire leftover pie to keep. The next day, I had a bit of donor's remorse - I really wished I could have tasted it then on refreshed taste buds for a fresher impression - but ultimately I'm glad that it all went to someone who would really appreciate it! 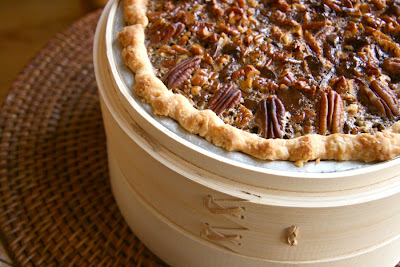 Thanks, Beth of Someone’s in the Kitchen with Brina for choosing this seasonally-appropriate and delicious My Favorite Pecan Pie, You can find the recipe is on Beth's blog (here) or on page page 327 of Dorie Greenspan's book, Baking: From My Home to Yours.
Posted by Nancy/n.o.e at 10:53 PM

i'm also loathe to deviate from my pecan pie musts--bourbon and maple syrup. i'm glad to know that this pie is promising...i'll try it one of these days:)

Ha, I love your post.
I made 1/3 the recipe and little mini pies. I'd never made pecan pie before and loved the chocolate.

Have a wonderful Christmas!

You didn't mention the expresso specifically but said you followed recipe as was- except for syrup. Did you like it in the pie? Looks pretty.

I'm not a big fan of pecan pie, but I'm still hoping to make a small version of this one for Jamie, who does like it. Your pie looks really good, and I like the idea of adding extra pecans.

Oh, that pie looks so good! Thanks so much for the bamboo steamer basket idea. I do a lot of bamboo steaming around here, so I have two of them in use weekly...never ever once figured out I could transport a pie in them! I have done lots of other things with them and use them to warm plates, etc. but pie transport...who knew!

Looks really good, and what a great idea to use the steamer!

So I always do my baking in the wee hours before the recipe is due, and I didn't want to bake a pie this time around. Too close to Christmas.

I second DharmaGirl's recommendation about bourbon and maple syrup. I stick to an old Martha Stewart recipe for that pie, and no one ever complains. But you really cannot go wrong with Dorie. She could tell us to put paint chips in the pie, and I'll bet we'd all do it.

Have an absolutely wonderful Christmas, n.o.e.!!!

Beautiful pie, Nancy! I love the bamboo steamer tips. I've been making the same pecan pie for > 20 years and modified it after reading a NYT article on subbing maple syrup in pecan pies. That's been my go to pie until this one, which we absolutely adored.

I should have used the Cook's pie crust. I used Dorie's, and it did not go well. Yours is lovely!

Glad someone enjoyed it - I think you would have too. But the cook never gets to enjoy everything on Thanksgiving. Good call on adding more pecans, too.

Beautiful photos, I love the presentation with the steamer basket. There are some weeks when it's hard to motivate to make the assigned recipe (I'm having one this week). It sounds like you already have plenty of pecan pie recipes to keep you busy, but I think this one is worth testing again.

What a great tip about transporting pies in steamers! Thanks for the idea. I never got around to make this one but it seems to have received rave reviews all around so maybe I'll stick it on the list for Thanksgiving next year? Great photos - yours looks fantastic!