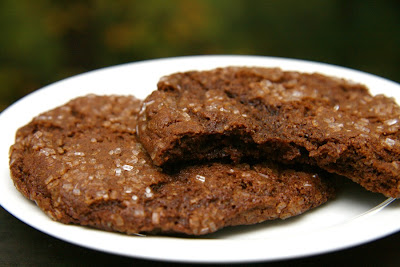 The TV show Sesame Street turns 40 years old today. It was the first consciously "educational" children's show and made quite the splash when it first aired. I used to babysit for a family as a full time summer job in high school, and I watched a lot of episodes of the early seasons with my preschool charges. The mom appreciated the educational aspect of the show and asked me to turn it on for them. (And when they napped, I watched the Watergate hearings!)

While I thought the show was creative and clever, it definitely annoyed me that none of the early Sesame Street Muppets were female (Bert, Ernie, Big Bird, Oscar, Grover, and on and on, all male. And when they finally introduced some female Muppets they were pretty insipid - Prairie Dawn, really?) But that didn't stop me from having my favorite my favorite Muppets: Grover self-described as "lovable and furry," and Cookie Monster, totally obsessed with eating cookies, as shown in the classic song "C" is for Cookie:

* *
A couple of seasons ago, Sesame Street's "curriculum" theme was healthy eating, and on air Cookie Monster was busy scarfing up fruits and veggies. But I know that in his heart, he would much rather get his hands on these Molasses Spice Cookies that Pamela of Cookies With Boys chose for her Tuesdays With Dorie pick.

- I used a mixture of all purpose and white whole wheat flour.

- We love spiced cookies, so I used heaping measures of the recipe's spices and a generous pinch of the black pepper. I also added some freshly ground cloves and nutmeg.

- The dough was quite sticky, so I rolled it into two logs and popped them into the freezer for 45 minutes or so. Then I just sliced off discs of dough, placed them on the cookie sheet, sprinkled some coarse sparkly sugar over them, and baked them. It was much easier than rolling balls of dough and flattening them.

- My cookies came out much deeper and darker in appearance than the ones in the book. I think this was from the new brand of organic molasses that I used and also the Trader Joe's brown sugar, which is darker than most "light brown sugar" is.

There was nothing sweet and subtle about these cookies - they were bold and brash with a pronounced dusky spiciness. I brought a plateful of cookies to a chili party on Halloween. The tasters were convinced that there was chocolate in the cookies, they were that dark and complex. I'm pretty sure that with milder sweeteners they would be smoother and more restrained. But for a 40th anniversary - or a chili party on Halloween for that matter - one might as well have wild cookies. Cookie Monster would definitely approve!

If you want to bake these cookies for your very own cookie monster, Pamela will have the recipe on her blog on November 17, or you can find it on pages 76 and 77 of Dorie Greenspan's book, Baking: From My Home to Yours.
Posted by Nancy/n.o.e at 12:01 AM

I love the dark color of your cookies! They're nice and thick too - gorgeous! I followed your tip to make logs and slice the cookies before baking and it made them even easier to throw together :)

At first look, I thought of chocolate too. Yours are nice and thick. Like that.

Wow they really are dark! That's a lot of spices too :) I love Cookie Monster, but Grover was always my fave :)

I made these cookies this week too and they went over big! There are only two left :)

Yours did turn out pretty dark, but they look soo good. I like that they are a little bit thicker than mine. I am going to have to try not smooshing them next time.
Love the tribute to sesame street and cookie monster. He would devour these for sure!

This is awesome! I remember thinking the same thing, too. I think I heard on the radio that of all the characters, Zoe is the only character whose name became extremely popular.

They look dark and delicious! Mine were thin and that was good too, but I'd try for thicker next time.

Grover was (is!) my favorite. I still have a Grover book from my childhood. Did you see the Bakerella Sesame Street cake pops? If not, be sure to take a look at her site!

Do you remember the original Muppets on Saturday Night Live in the 70's? They have come a long way since those days!
I am rather partial to Sesame Street and the Muppet Show. I still sing the songs I learned back in the day.. and the only Spanish I know is from SS.
Great looking cookies!

Your cookies look great...and I thought the black pepper really added a nice punch as well. Sesame Street was never a favorite with the boys...Alex was too impatient that they would tell the same letters over and over and shout, "I get it, I get it...you don't need to tell me so many times!" He was two at the time and already knew the alphabet backwards and forwards literally. He thought the muppets were so stupid. LOL. Matt always stressed about the fact that we never actually WENT to Sesame Street, after all they were always asking "Can you tell me how to get to Sesame Street?" And in his mind, if you could tell someone, we ought to be able to go there, too. We had the same problem with Timmy and Lassie and Matt as he just wanted always to go there or invite them over and I finally just gave the whole thing up and found other things to do than watch tv. It was just way too stressful.

Great preview of the molasses spice cookies. Thanks! I'm especially happy to hear that tasters thought there might be chocolate in there. A very good sign.

GREAT! I agree - these were wonderful, and I should have included "more" pepper in mine, as well as additional spices. Love that you took the initiative and went "bold and brashy" - they sound like the perfect ending to a chili party!

Your cookies look wonderful and your idea to roll them into a log is genius. I got sticky and gooey hands rolling them into little balls. I really enjoyed these.

Your cookies look great! I'm loving the daily Sesame Street themes on Google. I can't believe it's been around for 40 years.

Your cookies look terrific! I remember watching Sesame Street with my son, and he's 33 now. :)

I should have doubled the spices too - because you can never have enough, in my opinion.

I backed off of the spices, as I don't particularly care for 'heat' in cookies.

I made the crisps this week.

I love how your cookies look. And so smart to just roll the dough into logs and slice!

I grew up on Sesame Street. ;-) Your cookies look great!

I love Sesame Street. I wanted to dress up like Big Bird for Halloween, but I didn't have time to make the costume. Thanks for the Sesame Street tribute, I really enjoyed reading it.
And, on to the cookies! They look splendidly delicious. You're so smart to roll and slice them -- my hands got very sticky and doughy rolling them into balls.

Your cookies look delicious! I really enjoyed these, too. Mine came out rather dark as well, since I ran out of mild molasses and had to use some dark. I love the Sesame Street connection--I don't remember watching it much myself, but I remember my younger sisters watching. I've really been enjoying the Google tributes to SS over the past week, too. =)

Oh, your cookies look amazing! Dark and spicy and perfect! I am so excited to make these for next Tuesday, I've heard nothing but good reviews of them!

mmmm! these look gorgeous--mahoghany, spicy. i want one now.

i love your discussion of *sesame street*--i was only allowed to watch PBS as a child, and have fond memories of the show:)

Cookies look spicy and hot and delicious. I ramped up the spice but only made 1/4 recipe. Nice idea to add the allspice and nutmeg.

I really like how dark your cookies turned out and the sugar on top. I used to watch sesame street all the time. How I wish I could go back in time now!

What a nice tribute to Sesame Street; I've been enjoying the pictures on Google the past week.

Your cookies look great and it sounds like they were enjoyed. I will be sure to add a little extra spice to mine. I didn't realize the Trader Joe's brown sugar was much darker than regular, no wonder it's so good.

I loved Sesame Street as a little girl, and my favorite was always Cookie Monster. I have to admit I never actually realized that none of them were female!
Your cookies look terrific, and as a lover of any kind of molasses, I think they sound great, too.

Those look great! My cookies were darker in color too

I love how you used the demerara sugar with these. I didn't expect to like these, but they were terrific. I didn't use the allspice (or pepper), and added freshly grated nutmeg instead. I'm going to have to try your slice and bake approach.

Oh yes, Cookie Monster would definitely approve! I loved the intense flavor in these, loved the texture - loved it all. You know, I never thought about the lack of female characters in early Sesame Street, but you are so right. And I'm not sure Rosita, Zoe et al make up for the early snubs!

They are so pretty, Nancy. Thanks for baking along with me. You know, I don't think I ever realized that fact about the characters on Sesame Street. And I always thought that Prairie Dawn was a bit of an odd name! Anyway, they look delicious.