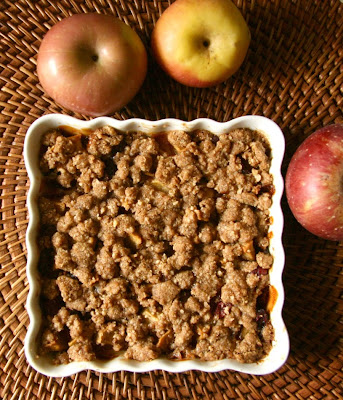 The recipes chosen for November in the Tuesdays With Dorie baking group are all quite seasonal, variously featuring the flavors of apple, cranberry, pumpkin, molasses, and chestnut (and chocolate, too, we can't have a month without chocolate!) Since any of these recipes could find a place on the Thanksgiving dessert table, the TWD powers-that-be have relaxed the rules for this month. The TWD bakers are free to bake and post the four recipes in any order, as long as we post on Tuesdays (and even that rule is suspended for the week of Thanksgiving, when we can post on any day of the week).

So, although technically this week's assigned recipe is the Chestnut Chocolate Cake, chosen by Katya of Second Dinner, I baked the Cran-Apple Crisp, chosen by Em of The Repressed Pastry Chef. Are you sufficiently confused?

Let's move right to the crisp then, shall we?

- Preparing this crisp couldn't have been easier. The topping ingredients are quickly mixed then chilled until it is time to assemble the crisp - in my case a day or two later. The fruit is tossed together in a bowl with a bit of flour and sugar. Then the two are layered and popped into the oven. Done!

- For the topping I was working with such small quantities (I was making 1/4 recipe) that my mini food processor was just the thing for mixing. I used whole grain flour, which I think works beautifully in a crumb topping. I substituted chopped toasted pecans for the sweetened coconut because I was only using 1/8 cup, and it didn't seem worthwhile to open a package of coconut for that little dab. I also added a pinch of salt to the topping.

- I had some local cooking apples from my farm box, and some other local apples from a fruit stand. I cut up one small apple of each kind, but I don't know the name of either apple variety.

- Instead of sugar, I tossed the apples and cranberries (two kinds: frozen and dried) with some molasses granules, which I'd just bought and was dying to use. We love the flavor of molasses, and the granules make for an easy substitution for granulated white sugar. [Edit: I ordered the molasses granules online from Prepared Pantry. I also picked up cinnamon chips, maple chips, honey granules.]

- I baked the crisp in one small baking dish. There was plenty of topping even though the dish was very shallow.

- There was just enough crisp to serve two. 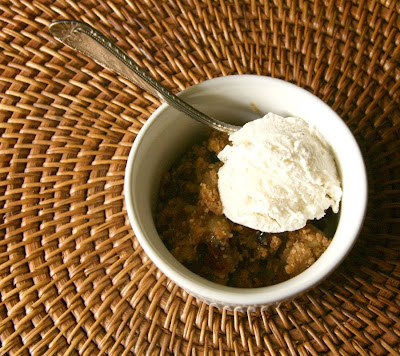 This was a delightful crisp! The flavors of apple and cranberry were very well balanced. I loved the different textures and flavors from the dried and fresh (frozen) cranberries. The best thing about a crisp is that you get the wonderful fruit flavor and crumbly topping of a pie without having to take the time (and ingredients/calories) that go along with pie-making. The crisp was good with homemade vanilla ice cream and it was good on its own.

This recipe is a keeper - simple and delicious, what could be better?

Thanks to Em for choosing this recipe. Look for the recipe on her blog as of next Tuesday, November 10, or you can find it on page 422 of Dorie Greenspan's book, Baking: From My Home to Yours.
Posted by Nancy/n.o.e at 12:01 AM

Where did you find the molasses granules? Those sound intriguing!

I can't wait to make this. Debating making the tropical version, although cran-apple is more seasonal. Love the dish you baked it in.

How nice ! I used frozen mixed berries because it's impossible to find cranberries . Yours looks great !

Use pecans instead of coconut - doh! I can make this recipe today without going shopping.
Your little crisp looks very inviting. I can't wait to try it.

It looks just delicious. I love crisps and I'm looking forward to making this one!

Delish! I love apple crisp. I should make this soon. We seem to have an enormous amount of apples on hand..

This looks so perfect in that dish you baked it in...very elegant and nice, I love the scalloped edges. I need more chick stuff like that around here. Thanks for the connect for the items you bought online, I'm going to do an order soon and I signed up for the free shopping spree, so I will love using that when I win it...LOL. Great post, am doing this on next week. It's nice to see to what I can aspire.

Perfect for this time of year.

I think next week, if I'm feeling up to it I will make the crisp.

The crisp looks wonderful. I'm looking forward to making this one.

It is kinda nice to get a couple reviews of this crisp before I make it. I am going to 1/4 it too.
I love the idea of molasses granules, very interesting.
It looks great, Nancy!

I made 1/4th the recipe too - and it was the perfect amount.

Looks great! Apples and cranberries are so perfect together, and the molasses granules sound like a nice sub. This one will be popular around here - can't wait to try it!

yum yum! i won't forget the ice cream when i make this...looks delicious!

Love the crisp. It looks comforting and delicious.

Glad we can do these out of order -think this one will be mine next week. I love apples and cranberries.

Ooooh, you made the crisp and it looks fantastic! I think this is the recipe I'm most looking forward to this month - I'm a sucker for a crisp. Molasses granules? I'd never heard of them so thanks for the link. I'll have to check it out!

I'm making the crisp tomorrow. Couldn't tell by the pictures that you just made a fourth of the recipe. Amazing.

Thanks for reminding me that I need to get over to The Prepared Pantry and place more order for those maple chips! Very pretty little recipe you've made here. It was tasty!

I will have to check out the website. Your crisp looks delicious and I love the square dish! I am making this for Thanksgiving dessert.

I made this last week but decided to post the cookies first (and must say like you, about moasses not gatehring dust at my place either!!!).

Boy was that crisp amazing! Loved it... Yours looks pretty nice in that nice flutted mold!

Great photos. Can't wait to make this one. (I made the bundt--it's de-lish!)

Beautiful crisp! I made this one, as I ran out of time for the Chestnut Cake and also enjoyed it. I have never heard of the Prepared Pantry, something tells me it's full of wonderful baking goodies - dangerous.

I've seen several of these crisps posted and can't wait to try baking this for thanksgiving. Your crisps look delicious!

Looks beautiful Nancy! I'm not a big crisp fan, so I am still debating on making this. I loved the holiday bundt though, even if it did stick in the pan :-/

I'm going to have to try this one over the weekend - I love apple crisp. Somehow I missed the relaxed rules - I am all about that! And by the way, your placemat is just gorgeous. Awesome photography.

Those molasses granules sound awesome! I'm going to follow your suggestions for the topping. Thanks for the tips!

I loved how easy this crisp was to make - and how delish! Your large crisp looks great.

I loved the pear version I made of this, but I really want to try apple, too. The combo of fresh and dried cranberries sounds so wonderful. Your crisp looks amazing, and your photos are beautiful!

molasses granules? that is too cool. I love the deep flavour of molasses too. it actually reminds me of that gingerbread recipe of yours you rave about all the time. I still havn't had the chance to try it out yet because I'm not sure how to mix after the butter is cut in.. does the flour still dissolve? would I have to whisk like crazy?

Yum! I think this one is next up for me. I'm going to use your sub of pecans for the coconut (don't like coconut).

Can't wait to try this one. Yours looks fantastic! I'm going to the farmer's market this weekend to get some apples! - mary

It looks fabulous Nancy, and you've captured it such an appealing way. Nice job!!

STUNNING! I love the first shot! It looks like there's a full batch in that wonderful dish. So happy you posted this and reviewed - as I am making this today/tomorrow! AND how wonderful that you have your own apples! I'm lucky they are so cheap nowadays, but homegrown must be heaven. I freeze my opened coconut and just grab a cup when needed (FYI) - but I love it so much, I have multiple bags going. LOVE the pecan though (my favorite nut) - that will be an addition I'll make in the next batch - so glad you liked it - if Nancy enjoyed it, then it's a keeper (in my book)!

I can't wait to make this one (I'm planning on this being one of the Thanksgiving desserts). I bet I could make it ahead and freeze it until T-day...