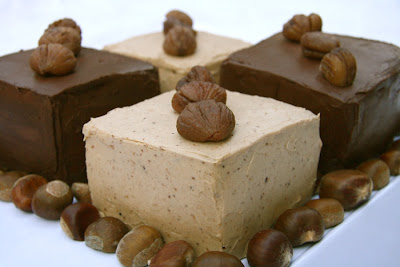 Back in October when I saw that this month's assigned recipes for the Tuesdays With Dorie baking group included the Chocolate Caramel Chestnut Cake, I took a sharp breath. The cake as pictured in Dorie Greenspan's book, Baking: From My Home to Yours is a show-stopper: elegant, square, perfectly smooth, and topped with gilded chestnuts. It looked challenging, and reading the recipe confirmed that impression. The cake comprises 4 elements - cake layers, a boozy syrup, a caramel ganache, and a dark chocolate glaze - and incorporates ingredients such as vanilla chestnut puree (imported from France), jarred chestnuts (imported from Italy), and gold dust (edible gold dust, to boot!)

If I was going to bake a cake so luxurious and complex (and I was), I wanted to bake it exactly as Dorie wrote the recipe. At the same time I wanted my husband to be able to enjoy this confection, and he's allergic to chocolate. The cake layers have no chocolate, so I decided to bake a full recipe, frosting half with chocolate and the other half with a non-chocolate frosting. And finally, while the brandy syrup sounded delicious, I also wanted to try a non-alcoholic syrup. My solution? Cut the larger cake's layers into 4 smaller squares, assembling them them with and without chocolate, with and without brandy. 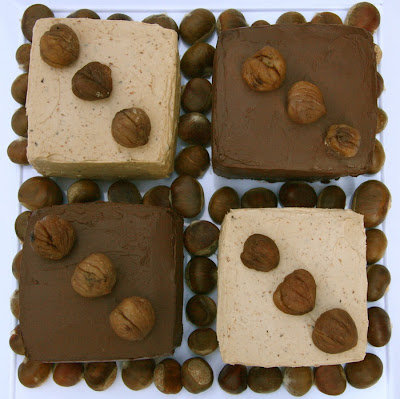 - I'm not going to detail all of the crazy calculations and steps I took to produce the 4 little cakes. But I made 6 different elements (and wish I'd made a 7th!) and managed to put the cakes together without any errors. Decorated cakes are a real challenge for me, but I was happy with how my little cakes looked.

- I baked a full recipe of the cake in a new deep square pan with a removable bottom. It was a 9" pan - or so it clearly indicated - see the picture, below. After I baked the cake I realized that despite the label on the pan it actually measured exactly 8"! Luckily it was deep and the batter did not overflow the pan, although it rose quite high and took eons longer to cook. In the end, the taller cake was much easier to split into layers (I cut the big square cake into 4 smaller squares, then split each quarter horizontally to make three layers. The cake baked fairly nice and flat, although after frosting the first cake I realized I should to trim the layers for the other three cakes a tiny bit so they'd be more level. 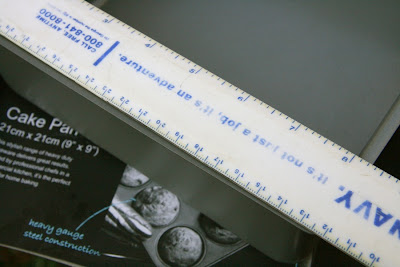 - Because of the way I cut up my cakes, I needed nearly as much chocolate frosting for two quarter-cakes as I would have for a single whole cake. (This also means that I had a higher frosting-to-cake ratio for each slice.) I made 2/3 recipe of the ganache, and 3/4 recipe of the glaze.

- I mixed up the brandy syrup for two of my little cakes. For the other two, I thinned some chestnut honey with water to make a syrup of the same consistency as the brandy one.

- I wasn't able to locate the edible gold, so my chestnuts are un-gilded. Luckily this was an optional ingredient

- Somehow the bittersweet chocolate glaze got a shade past pourable and ended up at spreadable.

- To frost the non-chocolate versions of the cake, I mixed 6 ounces of softened cream cheese, 10 ounces of mascarpone, and 6 ounces of the leftover vanilla chestnut cream with 1/4 cup confectioner's sugar. It made a lovely soft coffee-colored frosting with a bit of tang and a hint of chestnut. There wasn't a ton of frosting, and I hoped it would stretch for the two little cakes.

- It was only in retrospect that I realized that I should have made extra caramel to use as filling for the non-chocolate cakes. It would have saved the scarce frosting for the outside of the cakes (and the flavor would have been fantastic with the other elements of the cake). As it turned out, I had enough frosting to fill and frost the two little cakes, but just barely. The frosting layers were mighty thin, as you can see in the photo of the slice of cake, below. 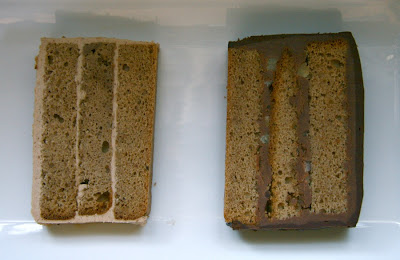 Gilded chestnuts would have been very fun, but as it was, the cake was quite striking, almost as striking as the picture of the cake on p. 269 of Dorie's book. I served it to book group, and as the members of the group arrived last Thursday and walked into the kitchen they stopped in their tracks when they saw the cake gracing the center of my kitchen island. They were very reluctant to dig in, and kept asking me if I had made sure to photograph the cakes.

Most of my tasters thought the chocolate caramel version was very good - "near great" - layer cake. (One member is not a chestnut fan, so he chose vanilla ice cream rather than the cake.) The chestnut cream gave the cake layers a wonderful woodsy richness. The cake was dense and although the medium brown color kept making me think it would be dry, it really was plenty moist. The cake kept beautifully in the fridge for several days.

One tester, HY, said, "It's good, but some of the other chocolate desserts you've made are better." I think she's right - the 15 minute magic chocolate torte, the chocolate armagnac cake, the caramel chocolate tart are better (and, I might add, a LOT less work). Although, to be fair to this cake, it isn't chocolate, but has chocolate frosting

The non-chocolate cake was well received. One taster, AF (who usually loves chocolate), actually preferred it. My husband loved it, cutting himself two generous pieces. Another taster thought it was too plain. One tester suggested adding another element, and I agree. I think if I'd done a caramel filling it would have been delicious with the mascarpone/chestnut frosting. I was a little proud at how the frosting turned out (since it was my concoction!)

As for the different syrups, I'm sorry to report that I didn't find either one detectable in the finished cake, so there wasn't an appreciable difference between the brandy and the honey versions of the cakes.

Overall I'm very glad that I baked the cake. It's a seasonal and sophisticated take on a layer cake, and I was happy that my cake turned out successfully. But given all the time required to bake it, I'll be unlikely to reach for this recipe again. 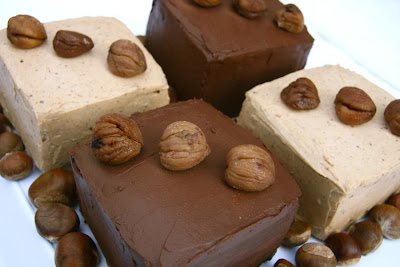 This seasonal cake was chosen by Katya of Second Dinner. You can find the recipe on her post. I loved reading about her love for chestnuts and her excitement to be able to choose this recipe.

Nancy, You did a fantastic job with this cake. love that you did four. they look like they came out perfectly.

I am not going to do this one, altho everyone said it was pretty tasty.

have a great TG.

Your little cakes are lovely! I like how you tried the different variations. I hate when pans aren't the size they're supposed to be. Though to be fair, the 21x21 cm measurement is correct, but 21 cm doesn't equal 9 inches. =) I had a similar problem with a so-called 8 inch springform pan once.

Ciao Nancy ! How wonderful your cake turned out ! It is so beautiful in the smal squares !! I agree the caramel tasted fantastic but I'm sure it was already fantastic !!!

These look beautiful! Love how you did different variations.

wow, so so pretty!

You've done a thoroughly amazing job! Both varieties of cake look and sound wonderful. For me, the benefit of making this cake was in learning new components taht could be applied to other desserts. You've done that and then some.
Brava!

these are just stunning! Even if they do turn out to be a once-in-a-lifetime effort, it sounds like it will make a great baking memory.
Audrey

Oh, your cakes are so gorgeous and elegant, Nancy! I can picture myself ordering one in a patisserie and getting it in a pretty little box. I am so impressed with all of the work you put into this pick! I'm glad your hubs enjoyed the non-chocolate version. I think that both versions sound wonderful.

Very artistic and impressive, Nancy. You really outdid yourself with this one.

Have a great Thanksgiving!

You are a genuous. they look perfect. This recipe scared me. I'm skipping out on this one! Loved the holiday bundt cake tho.
Happy TG!!

Nancy, your cakes are just stunning. I don't think I'm going to get to this one this week, but I do want to make it at some point. I'm thinking I'll make it for Christmas, as there will be lots of people around to watch my boys while I embark on the cake-making madness. Your cakes turned out so beautifully. I love all of your variations, and the mascarpone/chestnut frosting sounds amazing. I'm glad the brandy syrup doesn't add much, because brandy isn't something I ever have, and I didn't want to buy a bottle for this cake.

Amazing! What a great solution to allow your husband to enjoy the cake. I feel the same way about this one; I'm glad I made it, but it is unlikely to get a repeat.

I love your little cakes. What a great idea to make them with chocolate and not chocolate frosting. Beautiful!

They certainly are striking! Very artistic.
The pan size is like buying lumber - a built-in cutting allowance! ;-)

Wow! Great work. You are awesome.

Looks so elegant with the two colors and the beautiful way you arranged the chestnuts. I loved reading all the notes on the process and the cake...didn't make it this round, but it might be a go on the Christmas dessert buffet table. I love the look of yours.

I never made this cake because a chestnut cannot be found in this city, but I love this post the best. Maybe not the cake, per se, but the presentation and calculations and utter attention to detail is amazing. And don't you just love getting new cake pans! How exquisite these are - they are like little catered favors of heaven! So nicely done Nancy!

So impressive! I can't believe all the different things that you did with this cake. You put so much work into it and it looks so decadent and amazing. Very inspiring.

Your mini-cakes are fabulous! I'm so impressed!

Your cakes are absolutely stunning Nancy! I love that you made a non-chocolate version for your husband :) Thanks for the tips on the syrup without brandy. I don't have brandy and didn't want to buy a bottle so if I make the syrup I'll try your honey version. Thanks for being the inspiration I need to make this one.

The non-chocolate frosting is quite interesting. I'm impressed with all your calculations. Nice job!

Wow, this is just impressive. Here I go and make this, and only make the cake part. Then you go and make every component and *then* some? Adorably gorgeous mini cakes!