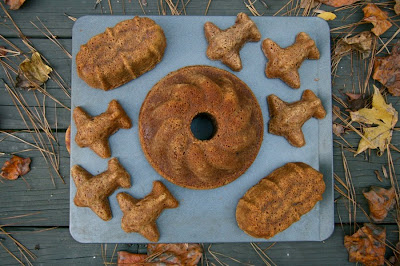 I often find out about daily food themes on the actual day itself (if you follow @Foodimentary on Twitter you can also) but at that point it's too late for me to do a tie-in post on my blog. This time, however, not only do I know it's National Bundt Day, I baked a bundt cake, photographed it, and am posting it on the day! I certainly cannot take credit for this massive level of organization; I owe it all to The Food Librarian.

To say that Mary (that's the Food Librarian's real name) is obsessed with bundts would be an understatement. She has featured many beautiful bundt cakes in the past, and back in August when it was her turn to choose a recipe for the Tuesdays With Dorie baking group, Mary of course chose a bundt - the first one ever picked for TWD. That was the fabulous Classic Banana Bundt, definitley the best bundt I've ever baked.

But all of Mary's past bundt cake love pales in the face of her most recent project. She has just completed a 30 day marathon of bundt cake baking and posting, culminating today with her National Bundt Day wrapup/summary post. Mary called her project "I Like Big Bundts."

In theory I like big bundts too. But therein lies the problem. Bundts are big. A bundt recipe make a whole lot of cake. Countless slices can be hewn from one massive ring of cake and hardly make a dent. (Luckily, most bundts freeze well, so you can spring the same cake on your unsuspecting friends and family in the future.)

An alternative approach to the big bundt cake is to bake a big quantity of smaller cakes. Most of the time when I bake a bundt recipe, I use 2 loaf pans, or a bunch of mini-loaves. When you split a batch of cake batter, you have enough for every mood and occasion: 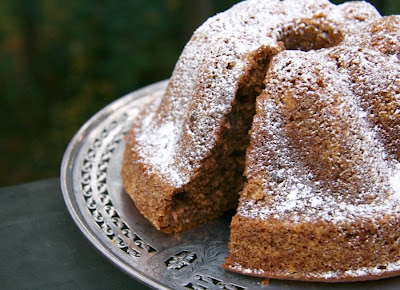 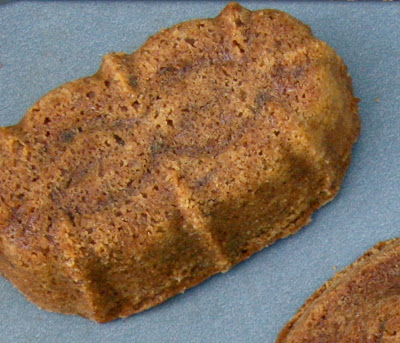 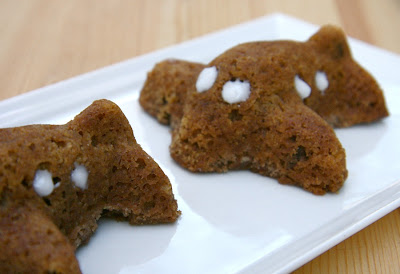 Fun
I found the recipe for this Blackberry Jam Cake in Nick Malgieri's The Modern Baker. Although I've had the book for six months this is the first recipe I've baked from it. Malgieri based this cake on American recipes that were more than a century old.

- The recipe as I baked it at the end of this post.

- Apparently some of the old blackberry jam cake recipes used cocoa powder and some did not. I was baking the cakes for a variety of people, a few of whom cannot eat chocolate, so I made the cakes both with and without cocoa powder. Similarly, I skipped the nuts in some of the cakes. I won't go into all of the calculations and variables to assemble the correct amount of batter with the correct types of ingredients for the correct pan sizes, but I managed to pull it off without an errors.

- Malgieri introduced me to a cool technique to keep molded cakes from sticking to the pan: butter the pan, dust it with fine dry bread crumbs, then spray the crumbs with cooking spray. I made my own crumbs from pound cake and corn muffin remnants which I dried in oven then processed in a mini food processor. When I coated the pan with the crumbs, the layer was not precisely even. Since the crumbs were lighter in color than the cake my finished cakes looked a little mottled. Nothing a dusting of confectioner's sugar or a glaze wouldn't fix.

- Even though my raisins were brand new, they were not soft so I plumped them in some hot apple cider.

- I used full amount of butter although I was very tempted to substitute some plain yogurt, or even some extra-light olive oil.

- Jam is very sweet, and I didn't want the finished cake to be too sweet, so I cut the sugar by a tiny bit. I would cut more next time.

- I used my batter to make a 6-cup round fluted cake (served to my book group), two 2-cup mini bundt loaves (gave to two friends) and 6 airplane-shaped small cakes (for my husband who loves planes.)

- I used a kugelhopf pan for the round cake, which I thought was appropriate because apparently the bundt pan is an American descendant of European kugelhopf pans.

- The cake would have been very pretty with a glaze but I knew that the cake was sweet enough without it. 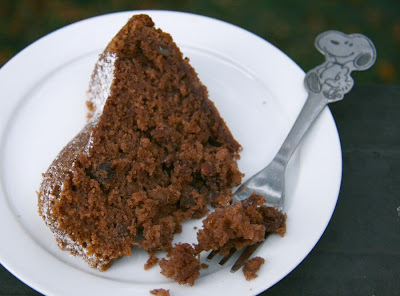 This cake tastes fantastic - a little bit spicy, a little hint of fruitiness, nice and moist with a soft crumb. Although it had a tendency to crumble (especially when it was warm) it wasn't at all dry. The cake was a bit on the sweet side, so I think I'd reduce the sugar even more the next time. I like nuts and raisins in baked goods, but I think this cake would be great without them - a lovely fruity spice cake.

I liked the airplanes the best - the edges of the wings were nice and chewy. Also, these didn't have cocoa, so the blackberry flavor was clearer. My husband loved the airplane shape and really enjoyed eating them for breakfast with coffee.

My book group liked the cake too, and were happy to split the leftovers. One of them, H, suggested that a tart lemon glaze would be a great counterpoint to the sweetness of the cake. I mailed the small bundt loaves to two friends. One of them, W, said it was "yummy!" and the other told me she enjoyed it with ice cream and warm blackberry sauce - now there's a great idea!

For more bundt-y goodness, check out 8 very tempting bundts from The Kitchn. 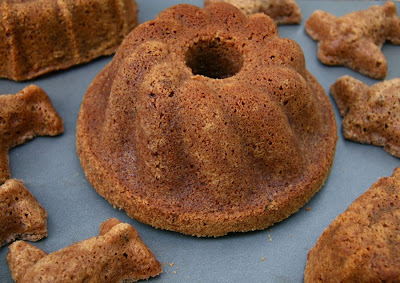 Set a rack in the lower third of the oven and preheat to 350℉.

For the cake batter, stir together the flour, cocoa, spices, and baking soda; set aside.

Beat the butter and sugar with the paddle on medium speed until light, about 5 minutes.

Beat in the eggs, one at a time, beating smooth after each addition.

Remove two tablespoons of the flour mixture and toss it with the raisins and walnuts to coat.

Use a large rubber spatula to give a final stir to the batter, then scrape it into the prepared pan.

Bake the cake until it is well-risen and firm, and a toothpick inserted between the side of the pan and the central tube emerges dry, about an hour.

Cool the cake in the pan for 15 minutes, then unmold onto a rack to cool.

Storage: Wrap the cooled cake in plastic wrap and keep it at room temperature. Freeze for longer storage. Defrost the cake and bring it to room temperature before serving.
Posted by Nancy/n.o.e at 4:14 PM

How fun! I love the shapes:) Blackberries are my favorite too. Happy National Bundt Cake day to you!

I would be the ice cream and warm blackberry sauce, and I have to tell you that this cake was absolutely fantastic, with or without the ice cream and blackberry sauce. Didn't need a thing, it was so good. I love all the shapes you made, they look so pretty with the cake. Those airplanes are too cute, my boys would have loved those as children! A great job! And, thanks!

What a wonderful cake. And all the shapes!! Blackberry jam would be a wonderful ingredient. I never think to bake with jams/jellies. Great idea.

And with a blackberry sauce - wowza!!

Love all your bundts. The airplanes are awesome! Thanks for the birthday wishes! I've got a brisket in the oven, but as soon as it's done, I'll be baking a banana bundt. I'm changing things up a bit (I always seem to)! That TWD banana bundt was one of my favorite Dorie recipes so far!

I love all of those fabulous bundt shapes, but those airplanes are too cute. As a general rule, I love jam in my desserts, so just the title of this post and the cakes has me cooked. The Modern Baker is on my wish list - hopefully I'll get it soon. This cake looks wonderful, and I'm happy to know that it was enjoyed by everyone who tasted it.

Happy Bundt Day! The cakes are gorgeous. I especially love the airplanes.

Cool! I love the airplanes. And the Snoopy fork. =)

I love your assortment of pans. Whenever I make a bundt and have to half it, I just use the regular bundt pan and end up with a funny looking squat cake. I'm dying for some mini bundt pans, which I'll be getting soon... I hope!

I think you chose a cool recipe. I've never baked with jam before, but I was thinking about it the other day. At least the flavour is more concentrated tahn real fruit.

So fun! I love all the shapes, sizes and variations!
I have The Modern Baker and I have never baked from it. I have looked through it tons, but never baked a single thing.
I love it.
Happy National Bundt Day!

Happy Bundt Day!!! This cake is delicious. I think it would be wonderful with the lemon glaze (or even lime!) your bookgroup friend suggested. I really liked the spiciness.

I love the airplane shaped ones!

These look awesome Nancy! My son would love those airplanes :) Interesting tip about the fine bread crumbs. I celebrated National Bundt Day by buying myself a new bundt pan. My was ready for the trash heap, so today was the perfect day :)

I'm tempted to make the cake with the cocoa, to see how it interacts with the jam. And I'll bet I could use a different flavor jam, too.

I love all of Nick Malgieri's recipes - they never let me down. His chocolate chip cookie recipe is my all time favorite.

Happy National Bundt Day to you Nancy! I knew you'd have a fantastic treat to share today and indeed you do. I am in love with the little airplanes - they're absolutely adorable! Thanks for sharing a recipe from The Modern Baker. I need to get that book from the library again to try this and other recipes!

Happy Happy Bundt Day! Thank you sooo much for all your encouragement these last 30 days! Oh my goodness. That PLANE is just so cute! And the blackberries....sounds so delicious! Thanks again for baking along with my craziness! I had that Snoopy spoon and loved it. ;) - mary the food librarian

Those little airplanes are so adorable. My 2-year-old son eats like a bird, but he's crazy about airplanes. This might be the answer I've been looking for to get his percentages back up on the weight chart!

Happy Day After National Bundt Cake Day! I enjoyed your bundt post. I love bundt cakes, but love bundt cake pans (specialty cake pans in general) even more, so I'm a huge fan of your airplanes. Maybe next year you can work with bugs & butterfly cakelet pans! The blackberry jam cake sounds fabulous. My MIL makes a jam cake for Christmas that is very good (and very sweet) so I know I like the jam cake concept, although I could see how it might take a little tinkering to get the sweetness level just right. Fun post and beautiful cake(s)!

mmm. i love the idea of a jammy bundt:) i too often go the loaf route, though i've been admiring the nordicware pans that have many small shapes (flowers, etc).

Happy National Bundt Day! (Much like "happy blogiversary," I've now written that more times than I ever thought I would.)

Your little cakes look fantastic and the jam bundt sounds divine. I forgot that I actually own the Modern Baker - I've also only made one recipe from it! Oh, and the TWD banana bundt was one of my favorites too.