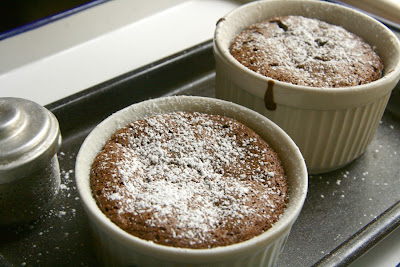 This week's Tuesdays With Dorie recipe is Chocolate Souffle, chosen by Susan of She’s Becoming DoughMessTic.

My post will be short and sweet, just like my souffles. Sorry, that was a bit of "souffle humor"!

- I've actually made souffles before, usually the savory variety, although it's been quite a while.

- This time I decided to play with individual souffles. I scaled the recipe to 1/4, which worked out the following amounts: 1.5 oz chocolate, 1/8 cup + 1/2 T sugar, scant 1 oz milk, 1 egg + 15 g egg whites (I have extra egg whites in the fridge from making ice cream). Next time I might consider adding a drop of vanilla. Whipping the egg whites worked very well with my hand mixer.


- I used two 8 oz ramekins. When I divided the batter, each of the ramekins was around 3/4 full before baking. The souffles puffed nicely in the oven, but the ramekins were too large for the souffles to rise above the rim of the dish. Next time, for a more dramatic appearance, I'd try using 6 oz ramekins instead, so they would be nearly full before going in the oven. That way, they would have that impressive rise over the top of the dish.

- Before filling, the souffle dishes are buttered and then dusted with granulated sugar, which gives a bit of a rough surface for the souffle to grab as it rises in the oven.

- I baked the souffles at 390 degrees for 23 minutes, and they tested done.

The souffles came out of the oven puffed and fluffy. I had just enough time to shoot a few pictures before they gently began to sink. I ate one plain while it was warm, and it was nice and chocolatey. I might have liked it better with a bit of creme anglaise, as Dorie suggests in the recipe, but I was far too lazy to make any! I loved the sugar crust, and realized that one of the benefits of individual ramekins is that there is more sugary crust!


I ate the other souffle as a "fallen souffle cake" - cold from the fridge with a bit of whipped cream on top, and actually preferred it that way. 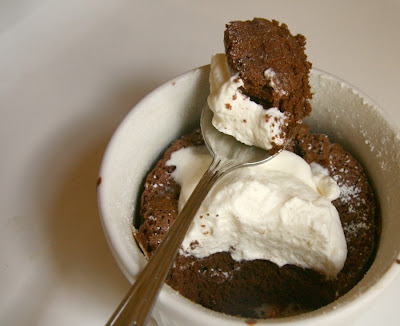 Thanks, Susan, for choosing such a fun and yummy recipe. (You can find the recipe on Susan's post or on page 408 of Dorie Greenspan's book, Baking: From My Home to Yours.)
Posted by Nancy/n.o.e at 12:28 AM

I love their looks !Yummy !!

Mmm they look amazing :) I really wanted to take part but couldn't find any souffle dishes to buy in time :(

YES - powdered sugar didn't cut it... creme anglaise - would have been perfect. These look marvelous Nancy - chocolate really pops against white (anything)! You must have been quicker on the "shoot" than I was! And you're so thrifty - just 2 souffles. You ate the first one and I'm hoping your husband got a chance at the second. Well done!

Your souffles look so delicious! I (hopefully) will get to make mine tonight. Better late than never, right?

Thank you so much for sharing your scaled back measurements- that made it so much easier for me to make these! I didn't get a taste, but my 2 friends who did liked them.
I will have to make them again and try the cold, rest in the fridge version that you like best.
They look good!

Your souffles look perfect Nancy! Thanks for sharing the ingredient amounts for 1/4 of the recipe. I'm getting ready to make mine this morning and it was nice not having to do the math myself :) I'm going to do minis too - using 7 oz ramekins so we'll see how that works out!

Looks great Nancy. Next time I'll try it in the fridge :) I forgot to add the egg yolks in mine and they still came out tasty :)

Looks wonderful...the guys each ate two of these so I have no idea how they would have been cold or "sunken" b/c they never made it that far. They were a big hit. Yours look wonderful!

Your souffles look wonderful. I thought it was good hot out of the oven and cold from the fridge. I bet it was great with the whipped cream.

Your souffles look great! I wish I had some leftover to try cold. This really would have been great with creme anglaise, but creme anglaise wasn't making itself around here, and I certainly wasn't going to make it. Love your souffle humor!

Thanks for doing all the hard math to make the 1/4 recipe! It made things much easier for me. Your mini souffle looks wonderful, especially with the dollop of whipped cream. I now need to go find some 6 ounce ramekins for next time.

These were quite tasty and I was afraid of souffle--don't care for eggy desserts, but they were chocolaty and good!
Great work, once again, on the math. I hate figuring stuff like that out and lately have often turned to you/your comments on the P&Q for helpful info!
I mentioned you in my post,too. Just that I used your 390 degree suggestion and that I think you're pretty great! ;)

Your souffles look wonderful! Thanks so much for posting the measurements for the quartered recipe, it was so helpful when making mine at the last minute this afternoon! I'd like to try this recipe as a fallen souffle cake. We just made one with SMS which I wasn't terribly fond of (and it was my pick, unfortunately). I like this recipe a lot better, and bet it would be delicious fallen with ice cream, berries, etc...

I would not complain at all if presented with one of these babies, cold or hot, puffy or deflated. They look great! I haven't made them yet, but will keep the sizing/sugar advice in mind.

Math....oh how you escape me. Glad these turned out so well for you. I read you tips on the P&Q and mine turned out great! :) Yours look delicious!

How great that you could enjoy these two ways...I think the only reason I've never tried to make a souffle is that I (a) would never attempt it for company and (b) couldn't turn it into leftovers :) But the individual servings and the fallen souffle cake concept would solve that!

"Fallen Souffle Cake." Yes, that's what I was trying to make all along. Now it all makes sense. :-)

Thank you for posting the quantities of all ingredients for the scaled-down version. I'm operating on too little sleep to figure it all out!

I made the full-on recipe today--and wow, is it amazing!

Funny you should mention how good it is as left-over, I JUST told my husband, "I can't wait to have it tomorrow when its cold" I can tell the texture of this will be GREAT from the fridge!

I shall do the creme anglaise next time too!

I prefer it cold as well and when I tried it warm, I wished I had a bit of ice cream! Your souffles look gorgeous - I loved the crust!

Love the whipped cream with leftovers!

Mine was crying out for creme anglaise, but I couldn't summon the energy. I'm in some kind of end-of-summer malaise. Maybe next time!

oooh, yum. yours look very similar to mine. i loved the minis!

Hee hee, souffle humor. I have to agree with you, I think the texture of these is better chilled. And who can say no to some extra cream??

Chilled fallen soufflé is killer-good! I had one left over and enjoyed it the next day. You are so right about the sugary crust.

I thought it was just me who loved the fallen ones. glad I'm not alone. And, yes, that extra sugar crust is a real plus!

I could learn to love souffle since it is this easy, and soooo good.

Thanks for the help on the measurements, etc.

Your chocolate souffles look wonderful! I love the photo of the half-eaten one with the whipped cream - yum!
Thanks for the P&Q post, I followed your lead and quartered it to make 2 souffles also.

Looks delicious, especially with the whipped cream. Hopefully I'll find time to finally make these while I'm on vacation.

YOur souffles look great! Too bad I didn't get around to making these, but I will soon!