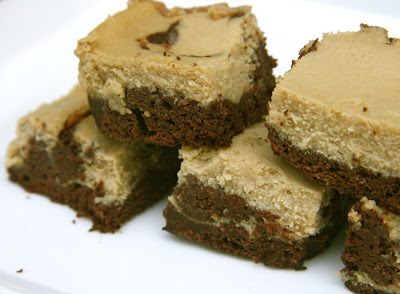 Hybrid desserts are rarely satisfactory to me (see, inter alia, Chipster Topped Brownies, Chocolate Gingerbread, and Thanksgiving Twofer Pie) While they can taste pleasant enough, I'm usually left with the nagging feeling that I'd rather have had one or the other of the elements on its own rather than the combination concoction. That being said, however, I thought there would be a solid possibility that I'd like this week's Tuesdays With Dorie assignment, Espresso Cheesecake Brownies. Brownies and I are fast friends, and cheesecake, especially espresso cheesecake, sounded like a decent addition. The best part? I could make these for a neighborhood potluck dinner and whether I liked them or not I wouldn't have to worry about finishing a pan of brownies by myself (that prospect sounded alternately wonderful and horrible to me).

- I made 1.5 recipe,m and the math was perfect for a 9 x 13 pan. I was a little concerned that the middle wouldn't cook through. It was only later that I realized (after I wrestled with done-ness testing angst) that I should have used two 8 x 8 pans.

- My swirling was pretty weak; the brownie batter was too thick and Dorie warned against over-swirling.

- I found it very difficult to test the brownie layer because it was under the cheesecake layer, which also had to be done. I may have left in a tad too long because the brownies seemed dry. Luckily, the fridge time helped; the brownies became denser and fudgier in texture.

- I left off the sour cream layer for ease of cutting and transport to my neighbor's house.

- I was lazy when I cut the brownies and didn't wipe my knife clean between each cut, so they ended up pretty raggedy-looking! 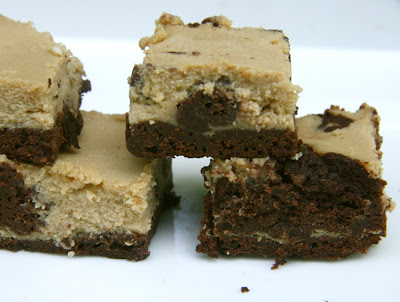 Unfortunately we left the party before dessert was served, so I don't know how people liked the brownies! The plate came back empty but I'm not sure I can draw any conclusions from that. I kept a few brownies for photographing (see? no swirls) and tasting.

To me these brownies were lackluster. The brownie layer needed more chocolate or more texture or something. Some chocolate covered cocoa nibs (those things are to die for!) would have perked up the brownies nicely, I think. The espresso cheesecake layer was delicious, though. But I would definitely like a different brownie on the base. Hmm, on second thought, maybe I'll just take a fantastic fudgy brownie... 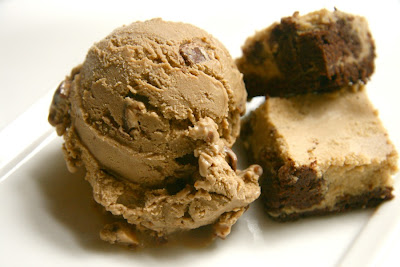 ...and while we're in the espresso/coffee mode, here's the final installment of Ice Cream Week (actually it's been Ice Cream Week Plus 1 Day) This weekend we were invited to a spur of the moment family cookout. I offered to bring homemade ice cream and my brother-in-law (the Grill Meister) semi-jokingly dreamed up a flavor request: "Coffee Heath Bar Crunch." He was pretty surprised when I showed up at dinner the next evening with his ideal ice cream flavor in hand (along with a full container of chocolate gelato).

- I figured that I'd make my BIL's requested flavor (I think Coffee Toffee sounds catchier, don't you?) by stirring in Heath bar bits into a coffee ice cream. I was pretty excited to make this because coffee ice cream and Heath bars are two of my favorite sweets individually and sounded like a winning combination together!

- There were at least three coffee ice cream recipes that I wanted to try, but ultimately chose the America's Test Kitchen Coffee Ice Cream recipe that my friend Tracey made because (1) it was easiest and (2) I wanted to try ice cream from a different recipe source than I'd previously used.

- My friend Maria suggested that I use chopped Heath bars rather than the packaged Heath bits, so I bought a bag of mini Heaths, figuring there'd be a bit higher ratio of chocolate coating per interior toffee. I chopped about half the bars (6 oz).

- I cooked my custard a minute too long (thought I'd turned off the stove burner but didn't) so I had to deal with some custard scrambling. I strained out the eggy bits and it was fine.

This ice cream was seriously delicious!! It was lovely as plain coffee ice cream (I had a spoonful before I stirred in the toffee) and fantastic with the Heath bar pieces. My brother-in-law and his family were thrilled with the dessert and even more excited when I left the extra ice cream in their freezer. 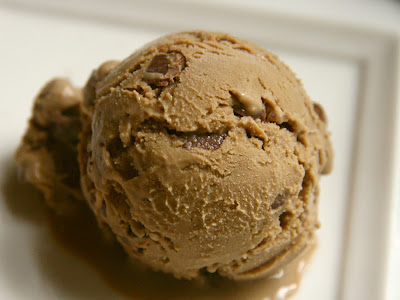 I am not a big cheesecake fan, but I do love brownies and with ice cream even better. Glad you liked the Heath bars. I wish I could have a scoop right now!

I added chopped up snickers to my brownie batter.

I thought they were wonderful.

Sorry you didn't get to hear the outcome of the brownies. I think they look good and the ice cream is looking yummy too! One TWD gal added nutter butter cookies!

I think we both share the same brownie philosophy. These were too dry for me, though the cheesecake layer was nice. Fudgy and intense chocolate brownies are the way to go. Thanks for posting about the ice cream, too. It sounds amazing!

The brownies are very pretty, but I think that ice cream steals the show! I love coffee ice cream, and it's Dudley's absolute favorite flavor, so I make it quite often. However, I've never added toffee to it, what a great idea!

I know what you mean about hybrid desserts- but that ice cream looks like it would sweep the floor with any other dessert!

The ice cream sounds to-die for. I'm going to try the recipe. I'm sad about the brownies. I really wanted to like them.

I was not a fan of the brownies, but both they and your ice cream look amazing. I'm sad to see the end of ice cream week :(

I agree - cheesecake, delicious; brownie, not so much; hybrid desserts - meh. My swirling was unsuccessful as well, seems like it was a common problem this week. That ice cream, however. Yum.

True, I would have liked the coffee ice cream better, I think.

Although I'm a coffee flavored dessert lover... this one didn't do it for me either.

Your pics are pretty darn nice though.

Your brownies look really good...I think they probably disappeared really fast at the party. My swirls did not work either. The ice cream sounds like it would be a hit here. It looks pretty also.

Way to amp it up with the ice cream!!! Great save, although your brownies look so good that they didn't need the save! The more I try these brownies, the more I agree that they needed a bit more!

I'm sorry the brownies weren't your faves...but day plus one of ice cream week sounds like a real winner! I just came across a recipe for cappuccino ice cream that I want to try.

My swirls were pretty pathetic as well. I thought these improved with age.

I concluded after making three batches of these, that I'd rather have a brownie and some cheesecake. That said, my third brownies were made with the Hepburn tribute recipe and THEY were much fudgier and actually quite good the second day.
I've loved all your ice cream this week!

What? These look fantastic Nancy - perfect "down home" brownie looks. Especialy paired with that ice cream. The brownie WAS a little on the "non-moist" side... I've been thinking of how to fix that going forward. But I would add a dash of espresso powder to the brownie batter anyway - to pump it up. Excellent ice creams this week - toffee....... MMMM! Beautiful!

Ciao ! I really love all of your ice cream !!! And am so curious about heath bars !!!

My feelings were the same about the brownies, not crazy about them, dry brownie, just 'eh'.

Your ice cream looks great. I am heading over to the link to see what is needed :)

Yeah, I love the concept for these brownies, but they need a bit of work still. Apparently the people at my daycare really liked them, though. =) Don't you love it when you make something that people jokingly ask for and they're so surprised when you come through? Glad the ice cream was a big hit.

I agree, the brownies were missing something!

I was a bad swirler, glad I had the topping on it.

I really don't think your edges look that rough. I think they turned out great.
The ice cream sounds delicious even though I don't do coffee- toffee=yummy.
I left you off the okra page because I was waiting until I post the farmland pie- you get all the glory in that post- lol!

The brownies look great, even if they weren't a favorite (I'm sure people at the potluck enjoyed them, though). Speaking of brownies, is the ultimate taste-off coming soon?

I have never made coffee ice cream, this looks like a great one to start with. The whole Heath bar was a good suggestion, I was not too impressed with the baking bits when I used thm.

Your brownies are fantastic but that ice cream is very tempting!

i liked the brownies after i put a chocolate topping on them...they just needed a little more umph. but i like your hybrid dessert philosophy--in general, i subscribe to that as well. that ice cream look great! i was just wondering the other day how i could use up half a bag of heath bits that i bought for a twd months ago.

I liked these. What worked about the brownies for me is they were solid enough to handle acting as a plate for the cheesecake. I didn't end up putting the sour cream topping on mine. Yours look great I bet everyone loved them.

The brownie layer was a bummer for me too. Mine wound up super thin - not sure if I saved too much batter for the swirling? Oh well, still pretty tasty! I'm so glad you liked the coffee ice cream! I haven't made it in a while but yours looks so good that I just might need to break out the ice cream maker when I get back home (even though temps will probably have fallen a bit by then).

They look great! I agree that adding something to the brownies could only be a good thing. Strangely, the longer these live in my freezer (where they are eaten by me one 1" square at a time) the more I love them. Eating the brownies frozen seems to completely eliminate the dryness issues. I bet the party guests loved these!

The ice cream looks fabulous as well! Definitely need to give that one a try.