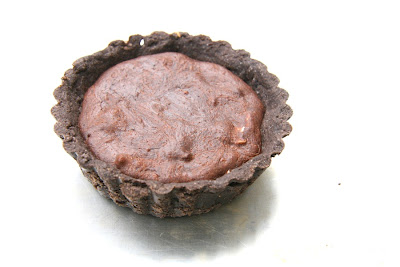 refrigeration dulled the appearance of the filling but not the chocolate flavors!

Fat Tuesday is often celebrated with King cakes, but on this blog post and the posts of a couple of hundred other Tuesdays With Dorie bakers today, Fat Tuesday is chocolate, chocolate and more chocolate.  And really, that is quite appropriate for the day of excesses before the austerity of Lenten fasting begins on Ash Wednesday.  In years past, the faithful would want to clear the pantry of eggs, cream, and other rich ingredients before the beginning of Lent, because these ingredients did not have a place in the strict Lenten diet during the 6 weeks before Easter.  The effort to use up the rich ingredients led to creations such as the King cakes.

Although the fasting rules are significantly more relaxed these days, I used the occasion presented by this recipe to clean out my chocolate drawer of all manner of white, milk, semisweet and bittersweet odds and ends.  And the finished product more than qualified as a rich indulgence.

- There are four host blogs for the tarts this week, and you can find the recipe at any of their sites, along with some pretty spectacular tarts: Steph, Spike, Jaime and Jessica.  Of course you can also find the recipe in the book Baking With Julia!

-  I made 1/2 recipe of the chocolate crust in the book.  Some of my fellow bakers have pointed out that the chocolate crust is very close to Dorie's recipe in Baking: From My Home to Yours.  The crust dough comes together beautifully (I used the food processor) with 5oz/cup for the flour weight, as it says in the front of the book.

-  I find that tarts are one of the easiest desserts to adapt to gluten-free baking (the fillings often have no gluten, and with a few good gluten-free crust recipes in the baking arsenal, whipping up a gluten-free dessert is simple.  So I made 1/2 recipe of gluten-free (and grain free, actually) crust from the blog Deliciously Organic.

- From each dough I made two 4" tarts (my tart molds are quite deep) and two 3" shallow tarts in my silicone mold (using 4 of the 6 wells in the mold).

-  The recipe clearly directs us to remove the bottoms of the tart pans before baking the crust, I suppose so that the crust would bake on the bottom without too much insulation from the tart pan bottoms and the baking sheet they were on.  Rule-follower that I am, I did take out the bototms of my little 4″ tarts but if I were making a full size tart I’d definitely leave the bottom in.  In fact, I would leave the bottoms in any tart pan because it was very difficult to unmold the tarts with no bottom to push against, and my crusts crumbled on the edges.

-  I made a full recipe of the filling.  The recipe calls for 8 egg yolks.  One thing learned from Thomas Keller's Ad Hoc cookbook is that egg yolks vary – those on the West Coast (of the US) are smaller than on the East. So when you are using a large quantity, the differences can really multiply!  Ad Hoc suggests a weight of 15g per egg yolk, so I measured a total of 120g for the 8 yolks, using a mixture of duck eggs and chicken eggs from my farm box.

-  The recipe calls for biscotti or amaretti biscuits to be crumbled into the filling for crunch.  I used 5 amaretti (they seemed small, and I would use a few more next time). 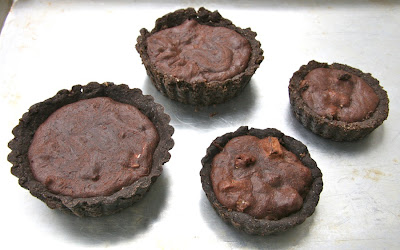 The tarts were quite good and quite, quite rich.  Just one of the 3" tarts (which were really small) bordered on being too big of a serving!  The texture of the amaretti got lost in the heavy richness of the filling.  The gluten-free crust turned out very well, and I'll be making it again.

If you want to see a lot of chocolate tarts, go to the link post on the TWD site, and start clicking on posts of the different bakers.  Happy Fat Tuesday!!
Posted by Nancy/n.o.e at 11:57 PM

Yum, love the idea of cleaning out your chocolate drawer!! We really liked these, too, but you're right: very rich! Our three 4" tarts have lasted us through many nights of dessert. I'll have to check out the gluten free crust recipe; thanks for linking to it and reviewing it. :)

I tend to do "cleanout" as well with chocolate, etc. Your tarts are beautiful. I loved these and was surprised that they were not as rich as I had thought they were going to be. But Chan and I just ate like 1/3 of a tart for a serving.

Your tarts look great! You're right, they definitely did clear out the chocolate drawer.

This is a great "cleanout" recipe, with great results. Thanks for the link to the g-f dough, too.

Yes, they were quite rich. And definitely delicious and decadent. So much chocolate!! And so good.

I admit, I skipped the white chocolate. =) I left the cookies out, too, and didn't miss them. Your little tarts are great--I have lots of pans already, but now I'm thinking I might need a couple of minis.

As you know, I skipped this one but it does sound delicious. Now I know why we're friends...you have a chocolate drawer, too. :-)

Nice tips - the gluten free crust is a good idea.

Lovely tart! This was indeed the ultimate Fat Tuesday dessert. If one were giving up chocolate for Lent, what a way to go! Interesting tidbit on west coast vs. east coast eggs - though my personal bias would lead me to believe that the western chickens should be happier and make larger eggs! Thanks for baking along with us this week.

perfect for cleaning out the chocolate stash, and for OD-ing on choclate before Lent! i like those little 3" tarts...they're just the right size.

I know, we made them, I photographed them, and it stopped there. I need to post them as a double with the next one as it is a shame to do all that work in chocolate and let it just sit there. I need to post...something...anything...soon. Or close up shop...lol. Yours look wonderful and I love the different sizes, something for everyone!