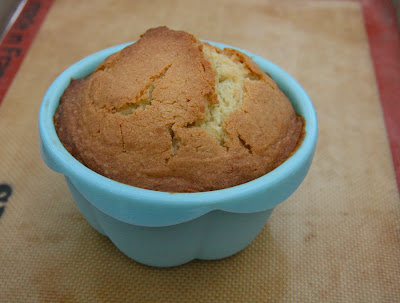 The actual name of recipe is Perfection Pound Cake, from Dorie Greenspan's Baking From My Home to Yours, and it was baked by the  Tuesdays With Dorie baking group four years ago this week.  I wasn't a member of the TWD group then, and now that the group has finished baking through the book I am catching up on the ones I missed by baking the recipes chosen early in the group's history.

"Perfection" in the title of the recipe sets a mighty high bar.  Going into my baking session I was dubious.  Not because I don't trust Dorie's recipes; I do.  If I were to bet that anyone could make an extravagant claim for a baking recipe and prove it to be true, my money would be on Dorie.  But I had read some accounts of this cake from various bakers over the years, and reports indicated that the cake tended to turn out "dry."  That's a common hazard for a pound cake.

I've been to enough Southern funerals to have tasted a goodly number of pound cakes.  Many are dry, to be sure, but I have garnered some outstanding pound cake recipes.  My absolute favorite comes from the cookbook put together by my children's elementary school as a fundraiser.  I haven't blogged that one, and I now realize that I need to remedy that.

The day I baked this cake I stood in front of my mixing bowl and contemplated added a little something to the cake batter to ensure that it wouldn't turn out dry - a dollop of sour cream or yogurt sounded like a good plan to me, but I squelched that thought and baked Dorie's recipe as she wrote it.  I wanted to know if it really is perfection! 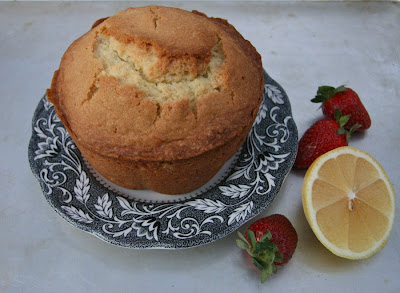 -  You can find the recipe for this cake on Michelle (now the Brown Eyed Baker)'s old blog, here.

-  I cut the recipe in half and stuck right to the recipe.  I couldn't resist having some fun, though, and used a cute little silicone pan that I had bought at IKEA back in the fall.

-  Dorie gives the option for a lemon variation, and that's what I chose.  I figured that lemon would give the cake a boost in case it fell short of perfection.  To adapt the recipe from the basic pound cake, rub grated lemon zest into the granulated sugar with your fingertips before adding the sugar to the butter.

-  My little cake rose nicely and developed that signature pound cake crack on the top.  It was so small and cute - like a little muffin pound cake.  I think I might have left it in the oven a minute too long.

Well, I have to be honest here: my cake did not rise to the lofty heights of perfection.  But it was a good pound cake.  My tasters and I enjoyed the lemon flavor and the fact that it wasn't overly sugary (which can happen in a pound cake.)  Was it dry you ask? My answer is: I don't think so.  This was an issue of some discussion with my tasters and we couldn't quite decide if it was dry.  But at the same time it was not what I'd call a moist cake.  I think if I had taken it out of the oven a minute or two earlier it would have been better.  As it was the cake paired nicely with strawberries, and if I'd had any whipped cream on hand it would have been nearly perfection!

[note: my friend Leslie of Lethally Delicious is baking on the same TWD catch-up schedule and your can read her opinion of the pound cake on her post.]
Posted by Nancy/n.o.e at 5:53 PM

I've been meaning to try this recipe forever, but every time I think about making it, I read the reviews saying it's dry and back away. Glad to read your more positive review :) That said, I might still hold out for your to post your favorite!

I remember liking the cake a lot, but didn't remember if it was dry. If it had been I probably would have mentioned it.

Very cute pan! =) I did find mine to be a little dry when I made this one, but I may have overbaked it. I'd like to try the lemon version (I did a spice one).

I would love to be a tests if you need me:D

What a great little cake! I echo the eagerness for your favorite recipe. I, too, was struck by our similar approach/impressions, and I too left mine in too long.

I'm so grateful to you for thinking of going back and doing the recipes again. It's going to be a stretch but I'm glad we're in it together.

Very cute little cake. Even if not your favorite, it looks like it was worth the effort to bake/serve/eat it! I can now proudly say that I do, indeed I do, have a friend who uses phrases like "a goodly number." I've been waiting for years to be able to stake such a claim! Very cute...maybe even cuter than that cute little cake.

Your cake looks delicious, and I'm never one to turn down pound cake. If it's too dry, it could always be served with a bit of sauce or made into a bread pudding.