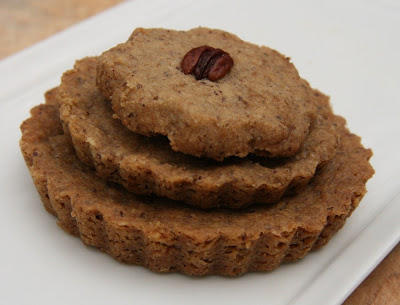 As we saw in last week's post, the Tuesdays With Dorie group is officially finished with Dorie Greenspan's Baking; From My Home to Yours, having selected every recipe in the book over a 4 year period of weekly baking assignments. I wasn't a member in the first several months of the group's history, so I'm going back now and catching up on what I missed by baking the recipes that were selected early on. I am following the order that the recipes were originally selected in 2008 in Tuesday of the corresponding week here in 2012.

Here's the way it will work: The group (although I think it was just 2 bakers at that point) baked the first recipe, Brown Sugar Shortbread Cookies, on Tuesday January 1, 2008. I baked the recipe and am posting it today, the first Tuesday of January in 2012. And so on until July, when I will reach the corresponding week to the one where I joined the group in 2008, and at that point I will have baked every recipe in the book! 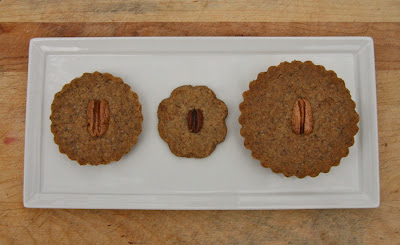 - You can find the recipe on Michelle's blog post from 2008 on her blog Sugar & Spice (the blog was later renamed Brown Eyed Baker.) Michelle was one of the two bakers in Tuesdays With Dorie that first week along with the group's founder, Laurie.

- Rather than grinding up my own pecans (which isn't particularly difficult in a food processor) I used pecan meal, which is very finely ground pecans. Knowing that the meal would come in very handy some day, I'd ordered it a while ago when King Arthur Flour offered one of its periodic free shipping promotions.

- I doubled the quantity of salt in the recipe, and even so it was not very noticeable in the dough.

- The recipe calls for a pinch of cloves; I couldn't wait to see what they would contribute to the shortbread. 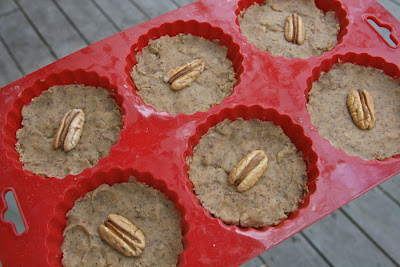 - Dorie's instructions are to roll the shortbread dough (in a zipper plastic bag, which is a very cool technique), cut it in squares, poke holes in the cookies with a fork before baking. I've done that with some of the past TWD shortbread recipes (here and here.) I almost always have issues with my shortbread spreading as it bakes, unless I bake it in a pie or tart pan, as I did in this post. and this one. Also my baking buddy Phyl made some shortbread cookies with cookie cutters recently, so I decided to do some experimenting with shaping my cookies:

1. I rolled some of the dough then cut it with a fluted cookie cutter. The cookies turned out pretty well, although they spread a little bit and lost some of their definition.

2. I patted some of the dough into the molds in my silicone mini tart pan. After baking, these popped out of the pan and cooled on a rack.

3. And finally, I spread some dough into my 4" fluted tart pans with removable bottoms. They released well, and produced a hefty cookie.

- All of the cookie shapes turned out well. My favorites were the ones in the silicone pan - they were a great size, baked evenly, and I loved how easily they released from the pan after baking. 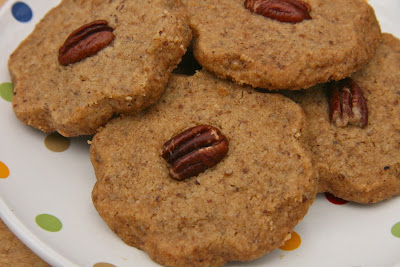 After all the fun I had shaping and baking the shortbread it was time to see how it tasted!
The cookies were crisp around the edges and tender in the middle. They were quite buttery, with complex flavor from the brown sugar, pecans, and cloves (which were not at all noticeable as an individual element, but added a mysterious little hint of spice.) There was just enough salt. I loved these cookies and will definitely bake them again! 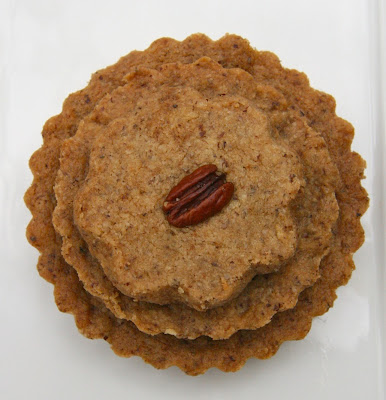 [edited on January 4, 2012 to add: the next recipe in the TWD rotation was Quintuple Chocolate Brownies. I previously baked this recipe and posted it here, so next Tuesday, January 10, I don't have a catch-up TWD post.]
Posted by Nancy/n.o.e at 10:48 PM

Mine spread like crazy when I made them. I think freezing the dough is the way to go if you're doing them freehand.

Wonderful no spread tips Nancy ! I wanted to check the 'made' list but couldn't find it on the new blog !

Ahhhh! The January 1 recipe wasn't on my list. Looks like I'm going to have to go back even further :-p

You are so organized to be baking through in the order of the original group! I had started baking through the book before I knew there was a TWD group so I have a whole different set of recipes to make! Only 21 to go, thought! Happy Baking!

Sad to hear that the group has come to an end, but as with all good things it seems to happen sooner or later.

Yum..I missed this one too but plan to bake them asap!I love the looks and sound of these yummy cookies! I love that you did 3 sizes too, I'll take the big one please!
Happy New Year!

So pretty...love the shapes of these, and leave it to you to do all the research involved, oh so very helpful always!

this is one of the handful of recipes from the book that i haven't made yet...but it's on my list! they look great, and thanks for the tip about upping the salt.

I'm so impressed that you're going back to bake all the recipes you missed. I need a little break from TWD and then I plan to go back and try some of the ones from before I was a member. The cookies look wonderful!

I am excited to make these for next week. They look delicious. Guess I will grind up my own pecans since I cannot get the meal here.

Trying to do the same and filling in with other years by month when I have done the recipe.

I love the shapes from all the different pans you utilized. Mine spread a bit but nobody seemed to mind. :-)

Those look great! I honestly can't remember if I ever did these as a rewind--if I didn't, I should, since I love pecans. I enjoyed reading about your experiment; it sounds like something I would do. =)

The cookies are absolutely beautiful - and I love that you are working through the rest of the recipes. Such dedication!

One of the "kitchy toys" that has come in handy, no doubt! Those cookies sound delicious and I like clove hints in baked goods as well. Enjoy the continuation of BFMHTY's.
AmyRuth