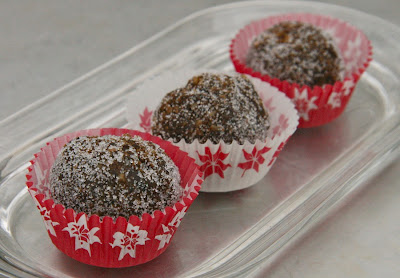 Bourbon balls were a fixture of my childhood at Christmas time. My mother's recipe - as most - used vanilla wafers as a base, combined with sugar, nuts, and of course booze. I could eat them by the handful. Even as an adult, if there aren't bourbon balls in the house Christmas is always missing a small but vital element.

About a month ago the home-cook-sourced site, Food 52, featured Ginger Plum Brandy Balls in their "Best Holiday Confection" contest. These were based on gingersnaps, and I knew I had to try them.

As luck would have it my fabulous daughter JDE needed to bake something gluten-free for a party. I had some Trader Joe's gluten free gingersnaps in the cupboard, so she threw these together and kindly left me some. Christmas bliss!

- These couldn't be easier for me to make, because all I did was gather a few ingredients and my daughter prepared them in my kitchen! Happily this recipe was quick and easy for her also; there's no baking involved and most of the prep is done in the food processor.

- The recipe gives a pretty wide latitude as to the type of alcohol to use. We had a bottle of spiced rum on the counter, so that's what we used.

- Cocoa powder is optional in the recipe. JDE opted to use it.

- I love the way the recipe's title uses the word "plum" - if it said prunes (which in fairness really are dried plums) it wouldn't sound nearly as appetizing I suppose. Our prunes were the cherry-flavored ones. For the rest of the dried fruit JDE used a mixture of dried cherries and cranberries (translate: whatever we could scrounge in the dried fruit drawer.)

These rum balls were very good, so good that I plan to make another batch to have on hand for our house guests during the holidays. Next time I'll skip the cocoa powder (I think chocolate tends to mask the flavor of spices) and try bourbon. They'll be a true throwback to my childhood Christmas treats!
Posted by Nancy/n.o.e at 3:02 PM

These look so elegant...and fun at the same time. Nice to have a mom recipe to pull out now and again during holidays. 3 generations of baking these!

I just love those little cupcake papers, so festive! I've only made rum balls once, and honestly can't remember how I felt about them. Guess I'll need to try again!