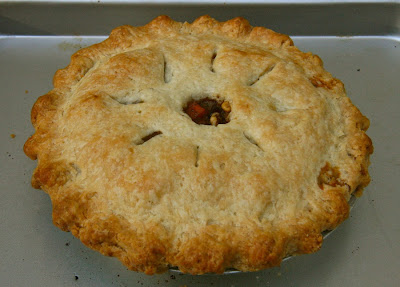 As we wind to the end of the Tuesdays With Dorie baking group, we find ourselves with a fair number of tart and pie recipes from the book still to bake. The November lineup for for the group includes 4 pies/tarts! This is fine with me, since tarts and pies are among my favorite things to bake and eat, and what could be better for November, with Thanksgiving approaching?

The first pie/tart on the November docket is Dorie's Depths of Fall Butternut Squash Pie. I've come across the recipe in the book often and always thought that it looked intriguing; it's made with cubed butternut squash, pears, dried fruit and nuts. I had high hopes for this recipe. 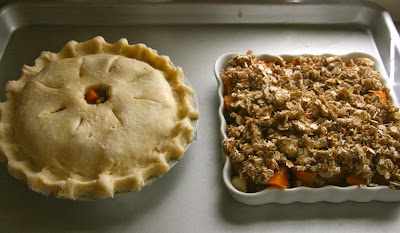 - Valerie of Une Gamine dans la Cuisine chose Fall Butternut Squash Pie, and you can find the recipe on her blog post.

- The recipe specifies 1" cubes of squash. That seemed awfully big to me, so I cut my pieces of butternut squash much smaller, probably closer to 1/2" cubes.

- For dried fruit I used a mixture of golden raisins, cherries, and cranberries.

- I made a full recipe of the filling. I used half for a 7" pie. The other half I put in a baking dish and topped it with a gluten-free crumble mixture (equal parts of oats, butter, and brown sugar.)

- The pie crust recipe I used was my favorite: Cook's Illustrated Vodka Crust, which I previously posted, here. 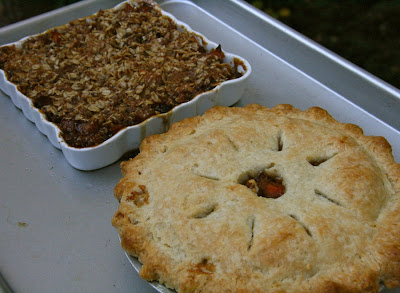 I served both the pie and the crumble, accompanied by vanilla ice cream, at a dinner with friends. Unfortunately the pie wasn't a runaway hit with the five people who tasted it. Our friend DaH said, "This is interesting and pretty good." He thought it had a bit too much squash. My husband would have preferred no squash at all in the pie; he firmly believes that vegetables don't belong in baked goods. To me the filling was too bland and not quite sweet enough, although I didn't have ice cream with mine, and I think it would have been better with the sweetness of the vanilla ice cream.

As an aside, the pie crust won rave reviews!

As for the crisp version, my friend DeH loved it; the sugar in the nut topping might have helped give some oomph to the filling. I wish I had tasted it, but I gave all of the remaining crisp to her to enjoy.

TWD is doubling up on recipes this month in an effort to finish Dorie's book by year-end. Here's my madeleine post.
Posted by Nancy/n.o.e at 12:03 AM

We are always looking for that WOW factor when we make a dessert, especially when we make them so seldom, at least I do. I have definitely bookmarked your crust recipe again:D

I wouldn't have thought to make a crumble with the filling--great idea!

That pie is absolutely flawlessly beautiful!

The crumble sounds amazing Nancy! I was so intrigued by this pie, but unsure how the flavors would work together. The reviews have been mixed on the blogs I've read so I'll just have to try it myself and find out :)

yes! i needed more sugar, too, and i'm not into super sweet desserts. i bet the crisp was wonderful--i'm a sucker for any fruit (or veggie, i suppose) crisp.

Sorry the pie wasn't a hit - it looks great though.

People (men) are so susceptible.I think if you'd called it 'subtle pumpkin', no one would have been any the wiser. We loved this one. Thank you for reminding me I can use the filling in a crumble when I'm too lazy to make pie.

I'm sorry this wasn't a hit, but your pie (and crumble), look delicious!
Thanks for baking with me this week. :D

We were on the fence with this one too. I am still not sure if I liked it. Maybe one more piece....

Your ie is perfect.