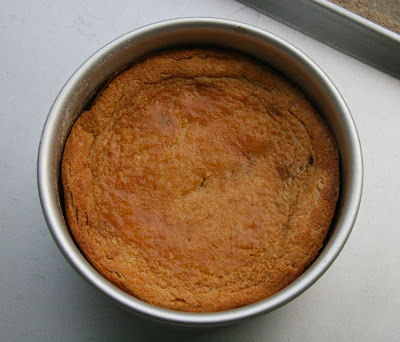 The baking group Tuesdays With Dorie began on January 1, 2008, and each week it has presented members with one assigned recipe from Dorie Greenspan's book Baking: From My Home to Yours. Right now we are *this* close to finishing the book, and the group's leaders have decided that we should finish by the end of Calendar Year 2011, making the group exactly 4 years in duration. In order to meet this deadline, we have to double up on weekly recipes for most weeks this month, leaving Thanksgiving week free for us to choose a recipe we might have missed. So there's a lot of baking going on in my kitchen, and each Tuesday's post in November will have not one, but two recipes.

This week's recipes are Far Breton and Honey Nut Scones. 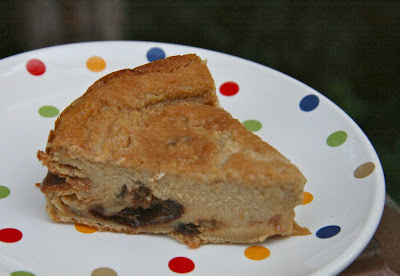 - Nicole of Cookies on Friday chose Far Breton, and you can find the recipe on her post.

- Far Breton is a regional dish from Brittany, containing prunes. Apparently the word "far" mean "flour" in Breton, but the batter for this cake is quite egg-centric with very little flour at all.

- Instead of white sugar, I used granulated golden palm sugar, and duck egg rather than chicken eggs.

- The recipe calls for prunes and raisins, although Dorie gives permission for other dried fruit substitutions. I stuck with the prunes and raisins, cutting the prunes in half before soaking the fruit in very strong black tea. The recipe specifies Early Grey, but I didn't have any (I rooted through the entire tea drawer not once but twice to prove that to myself.) Another option is to infuse the fruit with Armagnac, but I've never been able to locate it in the liquor stores in my hamlet.

- The far puffed a lot as it cooked, and browned beautifully. It took a good hour to bake, even at half the size.

- When I unmolded the far, it fell considerably, like a souffle. 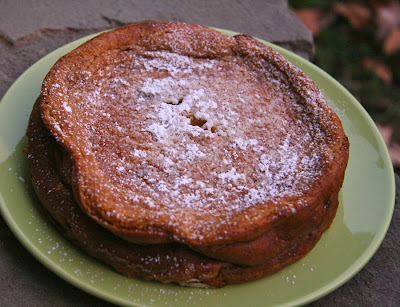 The far was squarely in the delightful no-man's-land between custard and cake, like a baked custard with enough flour added to edge it toward cake territory. Both my husband and I loved the finished product. It was eggy and dense and sweet and fruity. After its long soak in strong tea, the dried fruit was tender and nearly melted away into the custard. We found the far at perfect at room temperature as an after-dinner dessert, and nearly as good, chilled, for breakfast the next morning. 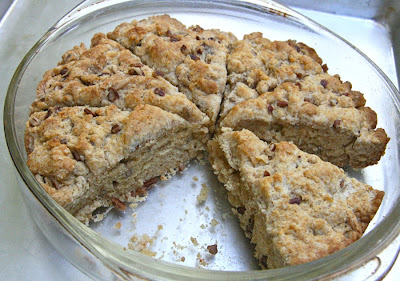 - The scones recipe was chosen by my baking buddy Jeannette of The Whimsical Cupcake.

- I stuck closely to Dorie's recipe, with the exception of using I used pecans instead of walnuts.

- Dorie's method for forming scones produces small, individual scones. I prefer a bigger scone with more "inside" and less "outside", so here's how I baked these: After mixing the dough I patted it into a disk in a greased glass cake pan, scored the disk into 6 or 8 wedges with a bench scraper, then baked. When the scones are still hot from the oven, I cut them into separate wedges along the score lines. To me the scones don’t end up dried-out this way.

These scones were a welcome sight for Saturday morning breakfast. And for Sunday and Monday as well! I'm more used to fruit than nuts in a scone, but I really liked the crunch and that the nuts lend to this recipe. This was one of my favorite scone recipes in the book.
Posted by Nancy/n.o.e at 11:14 AM

Mine looked great right out of the oven, but then when I took it out of the pan it fell flat as a pancake. Any thoughts on why that happened? I trust your instincts. Yours looks perfect as always. It was quite tasty.

That far breton is intriguing. Have to make it some time.
And like everyone else, I love your idea of scoring the scones in a pan and cutting them after they bake!

Lovely! I can imagine the taste of the Far with duck eggs - delicious. And I don't know why I didn't go with my round pan for the scones instead of just on the sheet. Well done, both.

those are handsome scones! i skipped that recipe this week, but i will have to try your cake pan method when i do make them. i did bake the far, and it was wonderful.

Wow, you made both (I knew you would actually!). They look so perfect...might have to do those scones as they do look really good and I think we would eat those. Love all your little notes, they are always so helpful...I always learn from them. Thanks.

I'm not a big fan of eggy desserts but I am intrigued by the Far simply because I didn't know what it was until the TWD posts LOL! Your scones look so yummy and I will HAVE to try the method you shared as I do like a little more inside than outside sometimes ;) Thank you for baking along with me this week!

great work getting both recipes in! Glad to hear they were both enjoyed

I'm definitely going to try your scone method. I was lazy this week and just did drop scones. The far looks lovely, but it's probably just as well that I didn't make it (too custardy, I think).