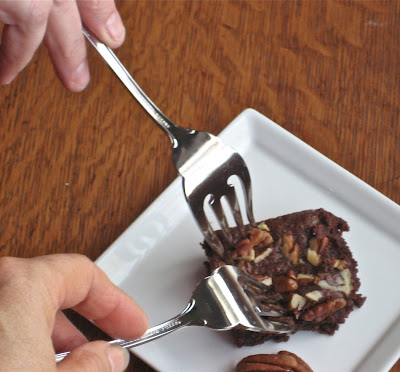 In late October when the November recipes were announced for the Tuesdays With Dorie baking group I set forth to bake as many of them as I could because I knew that first thing in the morning on November 1 my husband and I would board a flight to the West Coast. We will be spending a fair amount of time in the Bay Area over the next couple of years; this particular trip would be the first half of November. I was pretty sure I wouldn't be able to bake while away from my home kitchen so before leaving for California I managed to bake, taste, and photograph 7 of the 8 November recipes (we're doubling up this month in order to finish the book by the end of 2011). The one that I didn't manage to bake was this week's Bittersweet Brownies, chosen by Leslie of the blog Lethally Delicious.

Leslie has been a longtime virtual baking friend; we met through TWD, have baked bread together in the Slow & Steady subgroup of the Bread Baker's Apprentice Challenge (which I sporadically chronicle on my bread blog), and compare notes on baking and life via twitter. As is clear from her blog Leslie is kind, funny, talented, and smart as a whip. I knew that Leslie lives in the Bay Area and I had hopes that we could eventually connect on one of my visits. As it turned out, soon after I reached California, we both happened to have a free afternoon, and Leslie invited me to bake the brownies with her.

I quickly accepted her generous offer. I've enjoyed meeting TWD bakers on my various travels (some of the meet-ups have been recounted in Oprah's magazine, here, and on my blog here, here, and here), but this was the first time I've actually baked with a fellow TWD member!

The way it worked was this:

...then we decided to bake the brownies:

I had a blast checking out Leslie’s cookbook collection... we talked...

...and then it was time for me to leave.

All in all, it was a lovely afternoon, and I came away with a Ziploc bag of brownies and more importantly, a real live warm and gracious friend in the area. 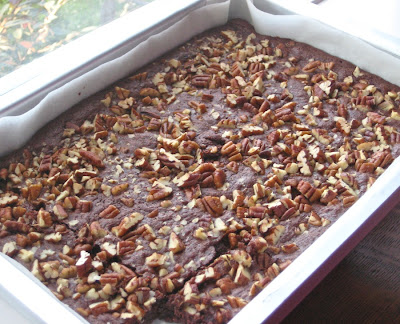 - You can find the recipe, and her version of the bake-along, on Leslie's brownie post.

Leslie had lots of tips and techniques that we used in baking these brownies:

- She added vanilla earlier than the recipe specified. Why wait, right?

- Leslie whisked the espresso powder in with the flour and salt, then added them to the batter together. Oh, and Leslie keeps a plastic container in her flour drawer for weighing flour. Every couple of recipes she'll toss it in the dishwasher. Genius!

- The chocolate was Ghiradelli 60% bittersweet chips, which Leslie uses for a lot of chocolate recipes; it's easy - no chopping! - and delicious.

- Pecans were among the assembled ingredients on Leslie's counter, and I agreed that nuts would be a fun addition to this recipe. Leslie showed me a cool trick that she learned from Cook's Illustrated for adding nuts to brownies. Instead of mixing them in, where they can absorb moisture and get a little soggy, we sprinkled the nuts on top of the brownie batter. They toasted as the brownies baked. Ingenious, no?

- Leslie has a nifty way of laying a piece of parchment in the brownie pan and folding the corners to fit. No measuring or cutting, easy and effective.

I was a baking near-slacker, but managed to chop nuts and contribute one or two little techniques:

- We used the trusty King Arthur Flour Divot Test and the brownies were baked through perfectly.

- I love chilling my brownies to get a fudgier texture. After a stint in the fridge, they were nice and dense.

These were really good brownies; I absolutely loved how the pecans were so dry and toasty thanks to Leslie's method. The nuts added a great textural element to this recipe, and the pecans in particular complemented the intense chocolate flavor. I usually use walnuts (when I add nuts to brownies) but will definitely use pecans again.

The brownies were on the sweet side, made even sweeter by sharing them with a longtime new friend. Thanks, Leslie, for inviting me to bake with you on your TWD hosting week, and thanks, TWD, for bringing us together!

Today's other TWD recipe is the Alsatian Apple Tart, which I posted here.
Posted by Nancy/n.o.e at 10:59 AM

I love it! What a great story and a great afternoon. My hubby always laughs at me when I talk about my baking "friends"...how can you be friends if you've never met in person? But of course we can! :)

how great! baking with a friend is so much more fun. hope you enjoyed the bay area...seems like a good place to spend some time to me.

I just love that top picture, it perfectly captures the feeling of the post. How wonderful that you got to bake these with Leslie! You've met so many TWD'ers in person, very cool :)

It's so exciting to read that two of my fav bloggers got together.
Nothing better than friendship brownies!

How wonderful that you two got to meet AND bake together. Leslie is such a dear!! One day, Nancy, one day!!!

This was such a great post. You forgot to mention that you were texting me before during and after! lol...it was such fun to hear what you were doing. I could just envision it all. I know you both so well that I know whose hand is whose in that photo...kind of spooky, isn't it? Very sweet, actually. Maybe the guys have something correct about not liking nuts IN things, only ON things. You are all confusing me with this nuts and chocolate thing each week! lol Great post, great brownies, great times!

How fun that you guys got to bake these together. =)

Oh gosh, I've got you fooled! I was so excited you were there I could hardly remember to turn the oven on!

Seriously, I can't begin to express how much fun it was to bake with you. And it was funny that the two of us talked nonstop (even at the same time!) for a couple of hours. You're welcome to bake, or just visit, in my kitchen any time.