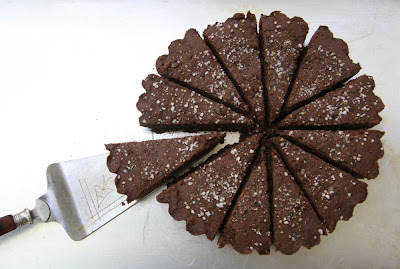 Is there any flavor combination more classic than salt + pepper? In recipes and at the table, the two stick pretty close together; in fact, it is considered bad etiquette to pass one at table without the other. Never separate "the twins"!

Although it seems that the two have been paired for all eternity, it turns out the 17th century French can take the credit for elevating the status of pepper and putting it with salt, familiar from ancient times. Separately, salt and pepper are intensely savory and assertively spicy, respectively. But they really shine when they're together; they complete each other to wake up the flavors of the food they visit.

This week the Tuesdays With Dorie bakers were treated to Dorie Greenspan's spin on the traditional combination; the assigned recipe was Salt and Pepper Cocoa Shortbreads. I love salt and pepper in sweets, although they usually appear separately, so I was excited to try these cookies. 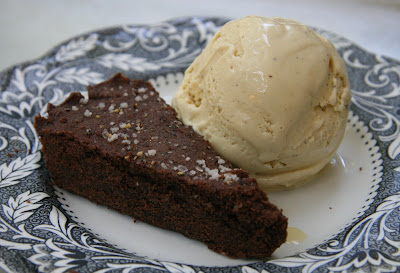 - When I first heard of these cookies, I thought they were just salt and pepper shortbread. And they sounded really good. Then I realized they were salt and pepper COCOA shortbread. Oh. That still sounded fine, but not as good as a basic shortbread amped up with salt and pepper treatment. It turns out that my baking buddy Phyl had the same idea; he baked one batch with cocoa and one batch without, and reported that he actually preferred the non-chocolate version. I got a little lazy and baked them with the cocoa, as conceived by Dorie.

- The cookies were simple to put together, and the dough chilled for several hours in the refrigerator until they could be formed for baking. Rather than making the shortbread as refrigerator slice-and-bake cookies, I piled all the dough into a medium tart ring and baked the shortbread that way.

- My daughter ALE had baked these cookies when she first got her copy of Dorie's book, and had told me that the salt and pepper flavors were relatively mild. Based on her advice I increased the quantity of both salt and of pepper that I used in the dough. And just before baking, I sprinkled fleur de sel and coarse pepper over the top of the shortbread.

- When making shortbread in a pan, it's helpful to score it with a bench scraper or knife before baking, and then, after it's baked, cut along the score lines while the shortbread is still hot from the oven.

- I served at a meeting of my book group, accompanied by some of David Lebovitz's Black Pepper Ice Cream, which I previousl posted here. 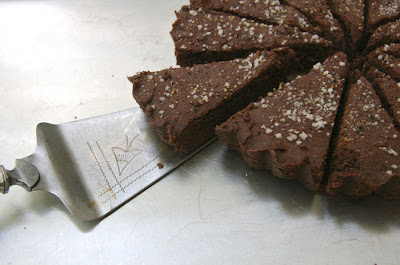 The shortbread was fairly crumbly when warm, but settled down nicely by the next day. As for the taste, on first bite I thought, "these are interesting, if a bit odd." The next bite was pretty good, and thereafter I found the shortbread curiously addictive. I thought - and my book club tasters agreed - that the cookies were especially delicious paired with the black pepper ice cream. The creamy cool pepperiness of the ice cream mellowed the salty, dry, chocolatey pepperiness of the shortbread. Except for the crumbly nature of the shortbread, the combination would be a delicious ice cream sandwich. As it was, I just balanced a bite of each on the spoon and ate it that way. 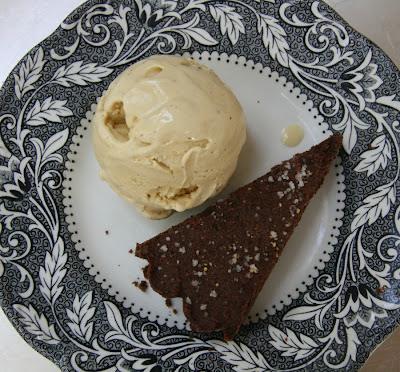 Intriguing combination with ice cream, something to try for sure. I love chocolate and salt together.

I agree with Laura and this is a very intriguing recipe. I would probably try the non chocolate version too.

Okay, you win this recipe...yours are really gorgeous baked in that ring and cut like that! You win, you win!! Too bad a prize didn't come with that, right? Very lovely (and if I am saying that about anything chocolate, you know it must be true).

great looking shortbread...love the idea of baking it in a tart pan!

gorgeous with that scoop of ice cream!

love how you describe the taste and how your verdict changed from bite to bite!

I liked these as I baked them, but I'd like to try them with more pepper next time. And I definitely need to try the black pepper ice cream, too. I love the way your shortbread wedges look--I'll have to try that next time, too. For some reason, I don't really like slicing & baking cookies, so the tart pan is a great idea. =)

I love them with the ruffled edges Nancy, so pretty! So funny you mention the etiquette about passing the salt and pepper together. I learned that at a law school etiquette dinner (before we started callbacks and all that fun stuff), had never heard it before :)

LOVE that you made them into a round. And with the IC I bet they were fantastic!! These are the best ones I have seen!!!